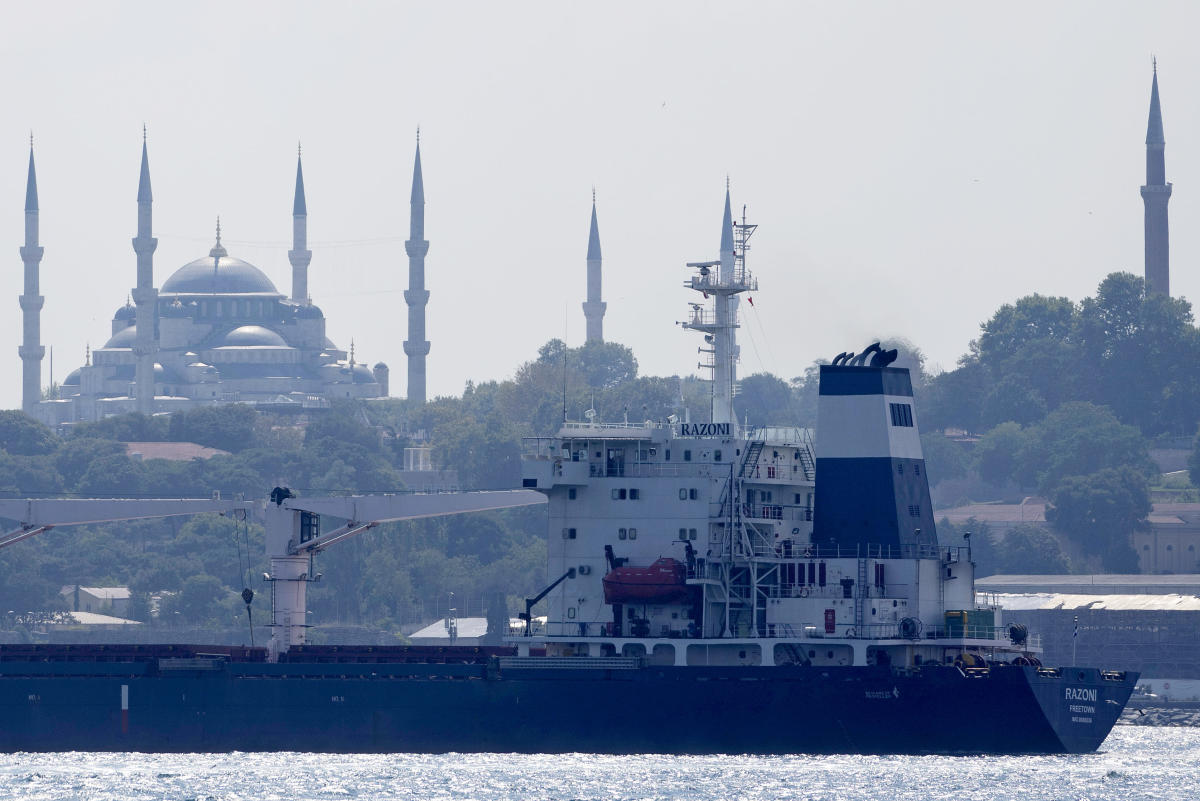 The three ships are loaded with more than 58,000 tons of corn. Much of the grain Ukraine exports is used as animal feed, experts say.

Ukraine is one of the world’s most important granaries, and stalled grain supplies have fueled food prices soaring and raised fears of a global hunger crisis.

The ships’ departure comes after the first grain shipment since the start of the war left Ukraine earlier this week. It crossed the Black Sea under the groundbreaking war deal and passed inspection in Istanbul on Wednesday, then continued on to Lebanon.

The ships departing Ukraine on Friday came from more than a dozen bulk carriers and freighters that had been loaded with grain and had been stranded in ports there since the start of the Russian invasion in late February.

While tens of thousands of tons of grains are now making their way out with these latest shipments, it is still a fraction of the 20 million tons of grains that Ukraine says are trapped in the country’s silos and ports, and must be shipped to make room. make for this year’s crop.

About 6 million tons of that captured grain is wheat, and only half of that is for human consumption, said David Laborde, an expert on agriculture and commerce at the International Food Policy Research Institute in Washington D.C.

Cereal prices peaked in the first weeks after the Russian invasion, but some have since fallen to their pre-war levels. According to Jonathan Haines, senior analyst and data and analytics firm Gro Intelligence, corn prices are about 70% above pre-pandemic levels at the end of February 2020. He said wheat prices are currently 63% higher than at the end of February this year when the invasion was launched.

The UN said the joint coordination center overseeing the deal has approved the three ships as the operation expands, and has also inspected a ship bound for Ukraine.

The Barbadian-flagged Fulmar S was inspected in Istanbul and is destined for the Ukrainian port of Chornomorsk.

The aim of the deal is to create safe shipping corridors for the Black Sea for the export of Ukraine’s much-needed agricultural products. Checks on ships by inspectors aim to ensure that outgoing cargo ships only carry grain, fertilizer or food and no other goods, and that incoming ships do not carry weapons.

The UN said the humanitarian corridor needed to be overhauled after this week’s first shipment “to allow ships to pass more efficiently while maintaining security.”