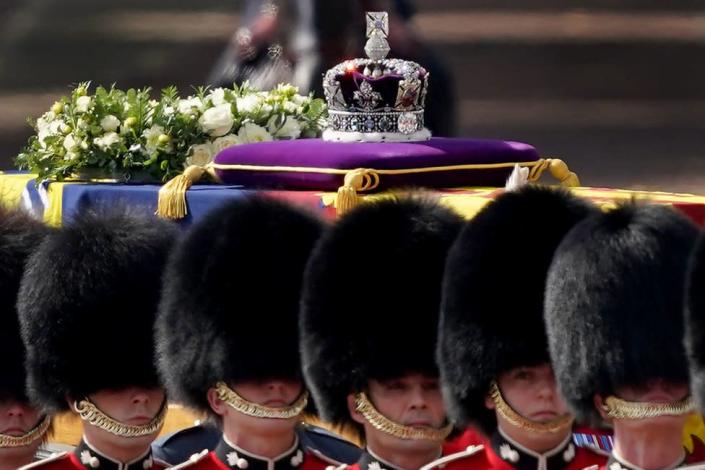 In our series of letters from African journalists, Elizabeth Ohene compares Queen Elizabeth II’s funeral to that in her home country of Ghana.

We don’t have a personality on the scale of Queen Elizabeth II, so it’s probably not fair to compare her funeral to how we do funerals here in Ghana.

But given that we are proud to be the world leader in funerals, it is not surprising that we have followed the scene of her funeral with great interest.

The first major departure from a large funeral, as we know it, is to have the queen buried within 10 days of her death.

In Ghana, the higher the status of the deceased, the longer the wait for the funeral. We seem to think that burying someone soon after her death is a disrespect.

To illustrate with a personal experience, my siblings and I are still in a bad light in our hometown for burying our mother three weeks after her death. We are told with horror that we buried our mother as if she were a chicken!

Then there is the matter of the long silences that characterized her funeral events.

Funerals are extremely noisy affairs here – at the funeral home and even in the church.

The noise level at our funerals must be high. When we play music, we play it loud. When we are drumming it is very loud and any number of groups can do it at the same time.

We cry. We wail to show our sorrow. We are expected to show the pain of our loss by crying out loud and often hysterically.

We do indeed hire professional howlers to provide an appropriate backdrop for the funeral, so it can’t be said that your mother’s funeral wasn’t crying. It’s the ultimate insult.

If tears welled up in someone’s eyes at the Queen’s funeral, it was something to respond to. When a daughter-in-law wiped a silent tear, it made headlines.

People in the crowd kept apologizing for being “emotional,” which is a code word for tears, or because they’re about to collapse.

Everyone here is impressed with how orderly everything was at the funeral.

There were straight lines. Of course we expect nothing less from the military and as they were at the center of events, the orderly order was to be expected. Our funerals are more of an organized chaos.

We know from long-term cooperation with the British that they are generally punctual and do things on time, tight on time.

This is troubling to us here where, with regard to funerals, time is an approximation at best.

To be laid in state, the Queen’s coffin left Buckingham Palace at exactly the announced time – 2:22 PM.

The state funeral service lasted an hour. That is certainly disturbing to a Ghanaian audience – it would have taken at least that long to introduce the VVIPs present. And while the whole world watched, the Archbishop of Canterbury delivered a homily lasting less than six minutes!

All these considerations have led me to the conclusion that the main difference between our funerals and the Queen’s can be summed up as: they march and we dance.

A march is performed by a group and watched by crowds. A march is rigid. It takes practice and rehearsals back and forth because you can’t put one foot wrong. You cannot join. Emotions are out of place.

A dance is an art form that can be performed by a group and watched by many, but it is participative and anyone can participate. We make it up gradually. There is room for mistakes and organized chaos.