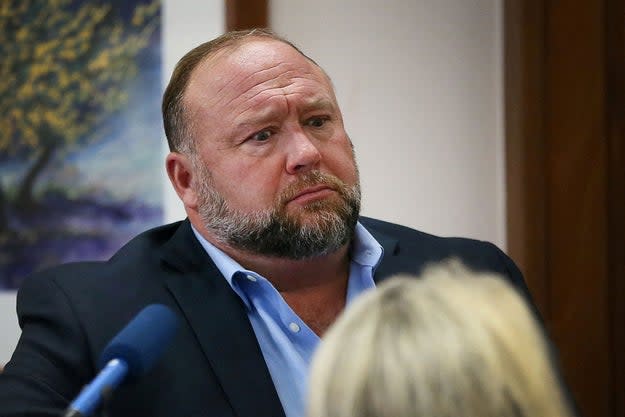 Conspiracy pusher Alex Jones was dealt another major financial blow on Friday after a jury ruled for the second day in a row that he would have to pay millions more in his smear fight against Sandy Hook parents, bringing the two-day total to more than $49 million.

On Friday, a jury ordered Jones to pay $45.2 million in punitive damages to the parents of a first-grader who was killed in the 2012 Sandy Hook massacre after a judge ruled that the Infowars founder defamed them with his frequent comments that they were crisis actors and that the mass shooting — in which 20 students and six teachers were shot at the school in Newtown, Connecticut — was staged as a pretext for gun control. A day earlier, the same jury ruled that Jones would have to pay approximately $4.1 million in damages to the same parents.

An attorney for Neil Heslin and Scarlett Lewis, parents of Sandy Hook victim Jesse Lewis, had asked jurors to award nearly $146 million in punitive damages, arguing that it was the only way to send a lasting message. and to “monetize misinformation and lies.”

Jones’ legal team had asked for the amount to be capped at $270,000, noting that the Infowars founder had offered to have Heslin and Lewis as guests on his show and “apologised repeatedly”. outside of Texas liability laws that should limit the final price to $750,000 per parent, for a total of $1.5 million.

Lewis told media after Friday’s verdict that it was “an important day for truth, for justice, and I couldn’t be happier.”

“This has been a long battle, a long time – 10 years – and to have the result to have a strong message to the world that literally choosing love is what we need to do,” she added.

The second phase of the process to hear evidence about Jones’ net worth and determine how much to pay in punitive damages revealed how lucrative his Infowars empire became.

In tearful testimonials, Neil Heslin and Scarlett Lewis described how their lives had descended into a “living hell” where they were confronted by strangers and sent death threats from fans of Jones. One forensic psychologist even testified that they had endured a form of post-traumatic stress disorder, similar to the constant trauma suffered by soldiers in war zones.

“I can’t even describe the last nine and a half years, the hell that I and others have endured because of Alex Jones’ recklessness and negligence,” Heslin said.

In a remarkable moment on Tuesday, Lewis was able to speak directly to Jones from the witness stand and beg him to face the wickedness of his actions.

“It seems so incredible to me that we have to do this — that we have to beg you, punish you — to make you stop lying,” Lewis said. “I’m so glad this day is here. I’m actually relieved. And thankful… that I was able to say all this to you.”

The legal and financial settlement for one of America’s most disgusting conspiracy theorists began in 2018 when multiple families of Sandy Hook victims and an FBI agent responding to the crime scene charged him and Infowars, the website he started in 1999. for defamation.

For years, Jones tried to delay the trials by not handing over documents to the families’ lawyers. These actions eventually caused courts to rule against him by default and begin a lawsuit to determine the damages — the first of which, for Heslin and Lewis, began on July 26.

Jones, for his part, remained as evasive and deceitful as ever—even while under oath.

He had to be reprimanded twice by Judge Maya Guerra Gamble for lying in the stands that he had provided pre-trial information to the plaintiffs and that he was bankrupt. InfoWars’ parent company — not Jones — filed for federal bankruptcy protection last month, but that won’t be officially established until a final hearing is held.

In an incredible moment on Wednesday, Mark Bankston, parental attorney, told Jones that his lawyers had accidentally sent him the contents of Jones’ cell phone containing texts about Sandy Hook that he had not disclosed, as well as financial information about Infowars. Jones had previously testified that he had searched for texts about the massacre, but could not find them.

See also  No change in status quo for China: Albanian

Bankston said Thursday that the U.S. House committee investigating the Jan. 6 attack on the Capitol has asked for that data.

While in the stands on Wednesday, Jones attempted to retract his previous claims about Sandy Hook. After portraying his trial as a First Amendment fight, in which he merely questioned established stories of mass tragedy, Jones finally admitted that the school shooting had been real.

“It was [irresponsible]. Especially since I met the parents. It’s 100% real,” he said.[The media] don’t make me take it back. They just want to put me in the position of being the Sandy Hook guy.”

The sentencing phase of the jury trial revealed how lucrative Jones’ Infowars venture had become, making millions of dollars when Donald Trump came to power. An economic adviser, Bernard Pettingill Jr., estimated the net worth of Infowars’ parent company, Free Speech Systems LLC, to be between $135 million and $270 million.

Within hours of Wednesday’s ruling, Jones was back in an Infowars video, ranting about how he had been treated in court and claiming the millions of dollars he must pay as a win. He also appealed to viewers to keep giving him money.

Jones faces two more trials in connection with his Sandy Hook conspiracies and misinformation – another in Texas and one in Connecticut, brought by multiple families.

“If you don’t fund us, if you don’t buy products in InfoWarsStore.com, we will close,” he said.