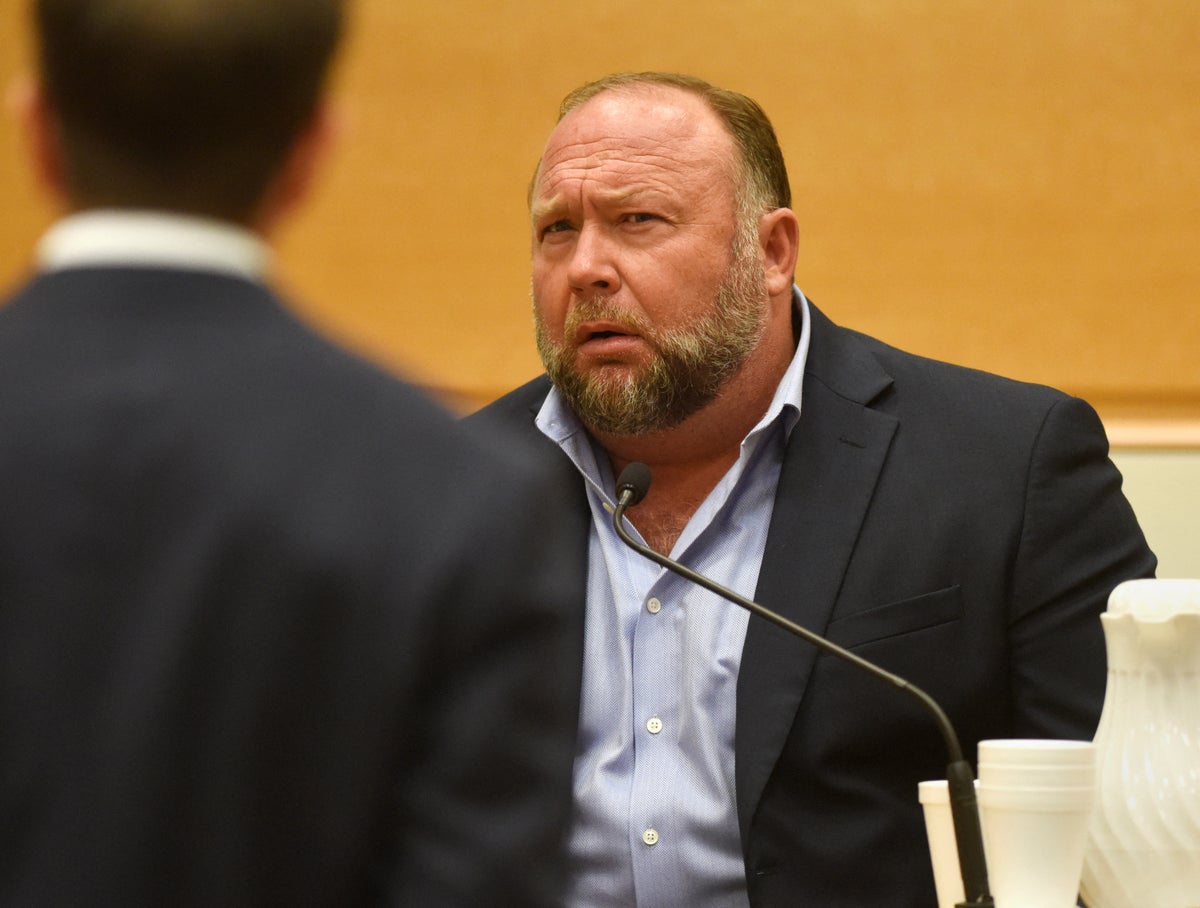 Alex Jones has bizarrely claimed that his furious outburst during testimony at the second trial for defamation over his lies about Sandy Hook has caused more damage to the opposition than himself.

The Infowars host was furious with reporters outside the court in Waterbury, Connecticut, Friday morning when his attorney Norm Pattis came in and told the judge he would waive the right to cross-examine Mr. Jones.

Pattis said he hoped the move would “lower the temperature” in the courtroom and that Mr Jones will testify for the defense at a later point in the trial.

Tensions flared Thursday afternoon when Mr Jones, under direct investigation from plaintiffs’ attorney Christopher Mattei, shouted that he was “done apologies” for his blatant claims about the 2012 mass shootings.

He lost his temper after Mr. Mattei claimed he put a “target on the backs” of the victims’ families by calling them “crisis actors” in the 2012 elementary school shooting, which he called cheating millions on broadcasts. .

The far-right conspiracy theorist — who spent much of the trial mocking the proceedings on his Infowars show — vowed he “will not apologize” for his actions, as he complained that “people think I have the kids murdered”.

Mr Jones and Mr Mattei sparred for several minutes – while families wiped away tears on the gallery – before Judge Barbara Bellis finally brought proceedings back under control.

Speaking to reporters Friday morning, Mr. Jones claimed his defense chose not to cross-examine him because it “wasn’t necessary”.

“Chris Mattei has completely self-destructed with a lot of twisted information and lies,” he said of the testimony.

“I wasn’t allowed to defend myself, so I just had to sit there while he lied and lied and lied. Then he had a big Perry Mason moment where he blew up and started yelling at me.”

He said the judge “couldn’t punish me because she wasn’t willing to punish him” and claimed his lawyer later told him, “If you’d have done what Chris Mattei did, you would have been guaranteed to be in jail.”

Mr Jones added: “Chris Mattei has already rigged the process, he’s already got it where I can’t provide evidence, and then he yells at me for five minutes, and I just respond and say, ‘You’re an Ambulance fighter, you’re a despicable person,” right back at him pretending I’m the devil.”

Elsewhere in his impromptu press conference, Mr Jones urged jurors to conduct their own investigation into the case – which is expressly prohibited by the court. The prosecutors have taken those comments to court and asked them to take action to prevent that.

Thursday’s dramatic scene unfolded as Mr. Mattei confronted Mr. Jones with the people he accused of being “crisis actors” almost as soon as their children and loved ones were murdered in one of the worst school shootings in US history.

Jurors were shown heartbreaking footage of Robbie Parker speaking to reporters the day after the 2012 massacre.

Parker’s six-year-old daughter, Emilie, was one of 26 students and staff killed in the Sandy Hook Elementary School mass shooting.

He swallowed the tears as he paid tribute to his little girl who “made the world a better place” for being in it.

After the judges looked at the heavy footage, Mattei pointed to Parker in court and asked Jones if “Robbie Parker is real.”

The right-wing extremist admitted “yes” – after years of claiming that the parents of the murder victims were “crisis actors” whose children never even existed.

“For years you’ve put a target on his back, haven’t you?… Just like every parent and loved one sitting here,” said Mr. Mattei.

Mr Jones denied that and tried to argue that he did not specifically name the relatives.

When Mr. Mattei told Mr. Jones that “these are real people,” the Infowars host started a wild rant about “liberals” and “Iraqis” before asking if he was “in China”.

“Just like all the Iraqis you, liberals, have killed and loved. You are incredible. You switch emotions on and off as you please, it’s just ambulance chase,” he raved.

Mr Mattei told the conspiracy theorist to “show a little respect” when relatives of the victims killed in the 2012 massacre sat in court and heard his tirade.

“You have families in court who have lost children, sisters, wives and mothers,” Mr Mattei said.

Unfazed by the statement, Mr. Jones lost his temper and went on the defensive, vowing not to apologize again for the pain he caused and doubling down that he “legitimately” believed his own lies when he first said them.

“Is this a battle session, are we in China? I’ve said I’m sorry hundreds of times and I’m done saying I’m sorry. I didn’t generate this, I wasn’t the first to say it… but I rightly thought it was staged, so I’ll stick with that. And I won’t apologize for it,” he said furiously.

“I’ve apologized to the parents over and over again, I don’t apologize to you. I make no apologies.”

As Mr. Jones and Mr. Mattei continued to spar with each other, Mr. Jones’s attorney repeatedly yelled “objection” over the uproar.

Judge Barbara Bellis eventually warned both lawyers about their behavior in a sidebar, before telling Mr. Jones to “respect” the court and remind him that the courtroom is “not your show.”

“This is not a press conference, this is clearly not your show. You have to respect the process,” she told him.

Mr. Mattei further asked Mr. Jones if there will be more mass shootings in the future, to which he once again jumped on the defense, suggesting the lawyer accused him of carrying out an assault.

‘You mean I’m going to shoot someone? How should I know that? As if it’s my fault, people think I killed the kids,” he fired back, before acknowledging that “probably will be there.”

Mr Mattei challenged Mr Jones whether he will continue to spread lies about victims of future mass shootings.

Jurors were shown content posted to Infowars just three weeks ago, showing that he continues to push through the false claim that mass shootings could take place.

In a survey on the website, viewers were asked, “What will be the most likely deep state false flag before midterm exams?”

Of the four multiple choice answers, the top one read, “Mass shooting.”

“When the next mass shooting hits, we all know what you’re going to do… You’re already conditioning your audience to be staged,” Mr Mattei said.

“You invite your audience even now that the next people – the next Robbie Parker – is an actor.”

Jones began spewing false claims just hours after the 2012 massacre in Newtown, Connecticut, claiming on his conspiracy site that the mass shooting was “a giant hoax” and that the victims were “actors.”

He continued to spread the lies to his followers for years, claiming it was a “false flag” operation.

While Mr Jones profited financially from spreading his lies, the victims’ families were harassed and threatened in person and online for years by his followers.

Speaking to reporters out of court on Friday morning, Mr Jones ranted about the basis of the case, saying he was found guilty by default despite there being “no evidence” that he was defaming the plaintiffs.

“That’s why I call this a show trial. It’s a lawsuit for damages, not a lawsuit where I can provide evidence. That’s not the American way,’ he wailed.

“There is a saying, ‘It is better that ten guilty men go to prison than one innocent man.’ And I’m not perfect, I’ve made mistakes and I’ve apologized many times.

“But imagine the precedent-setting case where they arm the judiciary and give people defaults — after they act on excruciating discoveries — so you can’t defend yourself, and then use the evidence you have them against you. given, but then you can’t even talk about that evidence.”

“This is basically as manipulated as you can get.”

This is the second defamation lawsuit in a lawsuit Jones lost with the families of Sandy Hook victims.

At a trial in Texas last month, Mr. Jones admitted he knew the 2012 massacre was real — and not a “hoax” as he previously claimed it was.

In that case, he was ordered to pay $4.11 million in damages and $45.2 million in punitive damages to Neil Heslin and Scarlett Lewis, the parents of six-year-old victim Jesse Lewis.

Now jurors in Connecticut will decide how much Mr. Jones should pay those families in damages.

Inspired by travel and city girls, LoveShackFancy comes to Paris to unveil its SS23 collection