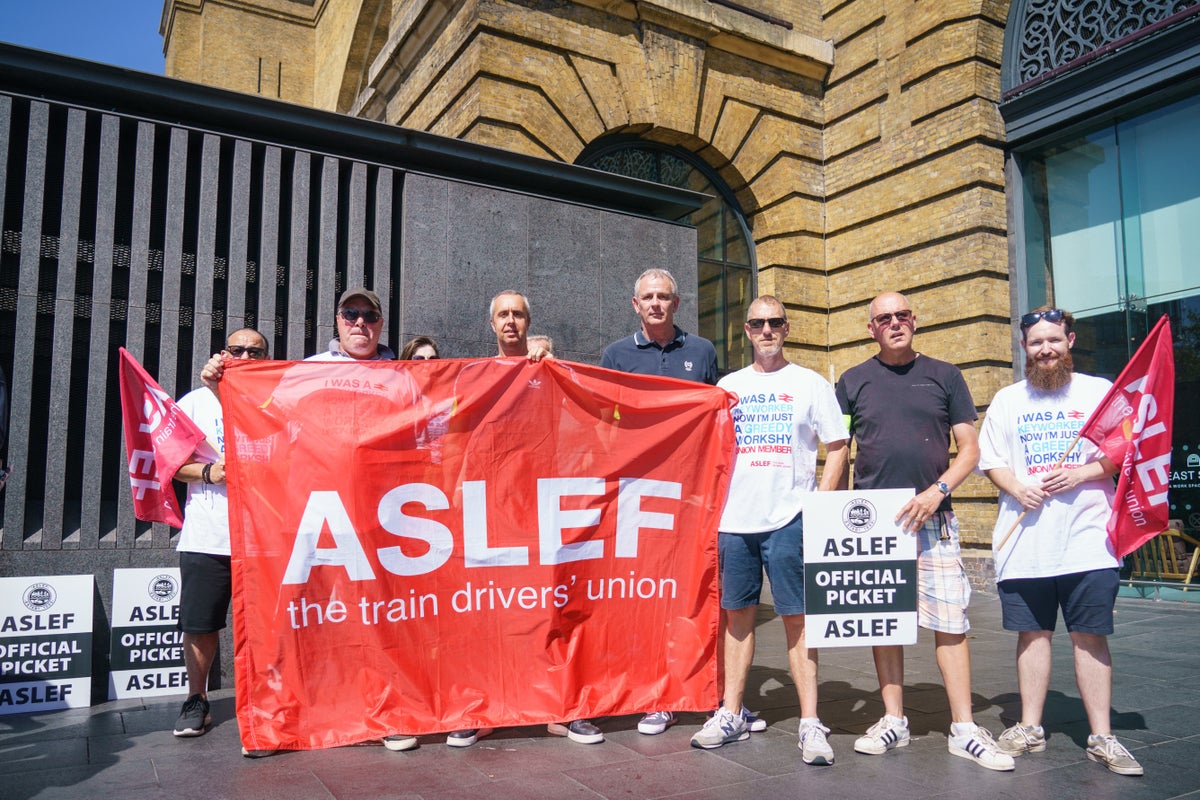 another railway company is hit by a strike by train drivers, which threatens a huge disruption of services.

Aslef announced on Tuesday that its members of 12 train operators will leave on October 1 and 5 in a long-running dispute over pay.

The union said drivers will also strike at East Midlands Railway on October 5, after members voted for union action earlier this week.

The strikes disrupt travel for delegates and visitors to the Conservative party conference in Birmingham.

The companies we are in dispute with have not offered us a cent.

Services are likely to be affected on October 2, the day of the London Marathon.

The Rail, Maritime and Transport trade union also announced a strike on 1 October among its members at Network Rail and 14 train companies.

Mick Whelan, Aslef’s general secretary, said: “We don’t want to go on strike – withdrawing your labor, although a fundamental human right, is always a last resort for this union – but the train companies are determined to take our hand.

“They tell train drivers to take a real pay cut. With inflation now at 12.3% – and reportedly going even higher – these companies say drivers should be willing to work just as hard, for just as long, but for significantly less.

“The companies we have a dispute with have not offered us a cent. It is outrageous that they expect us to endure a real wage cut for the third year in a row.”

A Rail Delivery Group spokesperson said: “These strikes will once again greatly hamper the passengers the industry needs to support its recovery from the ongoing impact of the pandemic.

“They range from people who have no money because they can’t work, to people who miss essential appointments and to thousands of participants in the London Marathon who after months of training will have to disrupt their trip to London over the weekend.

“The strikes are not in the long-term interest of rail workers or building a sustainable rail industry. We want to give our people a pay rise, but without the reforms we are proposing, we just can’t achieve pay rises.

“Revenues are still about 80% of pre-pandemic levels; no company can survive that magnitude of upheaval without making changes.

“The actions of union leaders have very real consequences: each day of strike costs their members more money.

“We want to see the industry and its people thrive – we ask union leadership to do the right thing, call off these damaging strikes and work with us to make that happen.”

The Transport Salried Staffs Association has announced that it will vote hundreds of its members at Govia Thameslink Railway (GTR) on possible union action, including strikes.

The union represents the workers, including platform and checkout personnel, train crews, engineers and management.

General Secretary Manuel Cortes said: “This is a clear signal to GTR that our members are unwilling to be pushed in the face of an escalating Tory cost of living crisis and a government seeking to cut jobs on the railways.

“I want to encourage our members to vote yes to both strike action and non-strike action, because we know we are fighting for the future of our railways.

“We have already seen a strong string of voting results from the railway companies that our union represents and we are ready to strike again in the coming weeks.

“Ministers and bosses at GTR would do well to get real now and allay our concerns so that further disruption does not occur.

“If not, there is likely to be crippling action on one of the main train networks to and from London and beyond in the near future.”

Angie Doll, chief operating officer at GTR, said: “Our focus remains on encouraging all unions to continue to work with the industry to find a solution that ensures the long-term sustainability of the rail.”