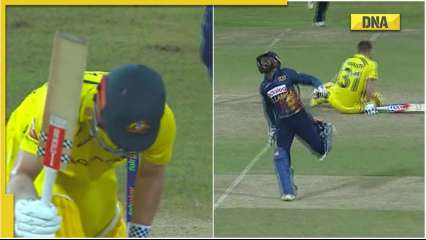 Sri Lanka put up a valiant effort to conclude the ODI series after beating Australia by 4 points in the fourth ODI. David Warner shone for the visitors, however, the Aussie batsman suffered huge heartbreak when he was sacked on 99 runs, just one short of his century.

At the fourth ODI in Colombo on Tuesday, Warner’s Australia were chasing a target of 259 points to win and stay alive in the series. While the veteran kept things tight on his side, the wickets continued to fall on the other side and once Dhanajaya de Silva’s rotation cheated Warner it spelled the end for the visitors.

Warner was looking to end things on his own, trying to make up his mind down the line, however, De Silva had other plans. He rounded the wicket against Warner and forced him into a cover drive, only to be beaten by the outside edge.

The Australian ace had attempted to attack the ball while walking down the runway, so wicketkeeper Niroshan Dickwella had the chance to dislodge the bails before Warner could recover.

You can watch Warner’s firing on 99 runs here:

Turn the tide of the game

In the process, not only did Warner join a long list of batsmen to be fired on 99 runs, but he also became only the second batsman after VVS Laxman to be locked out on 99.

After his death, Pat Cummins tried to take his side on the line with a solid 35 from 43 balls, but he too was fired in the penultimate of the chase. Australia needed 19 points for the final, and Matthew Kuhnemann nearly did the impossible by slamming Dasun Shanaka for 14 points in the first five balls, but he was caught on the final delivery which sealed a momentous victory in series for Sri Lanka.

Why Ruto is mad at Uhuru & Mutyambai – Matiang’i