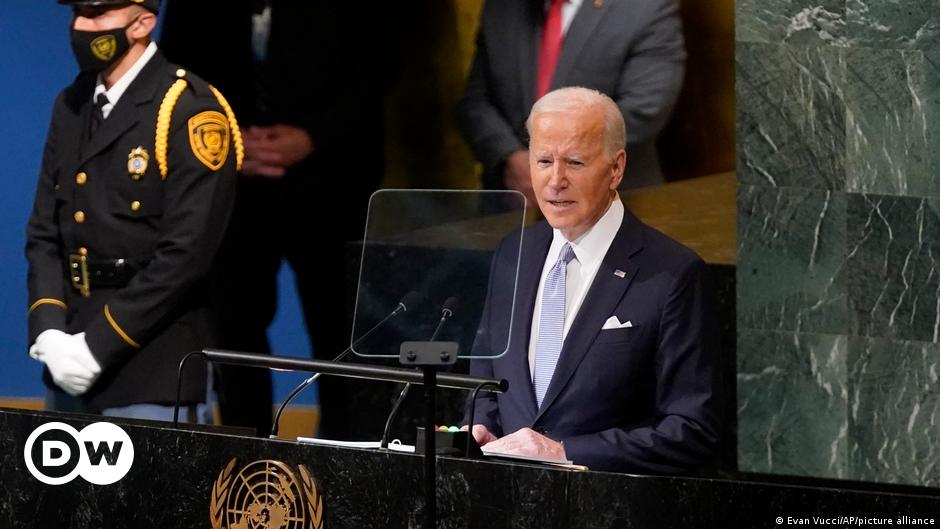 US President Joe Biden issued a “firm rebuke” over Russia’s “unjust war” in Ukraine during a speech to the United Nations General Assembly in New York on Wednesday.

He said Moscow “blatantly” violated the UN charter with the invasion.

“If nations can pursue their imperial ambitions without consequence, we are risking everything this institution stands for,” he said.

Biden’s speech to the UN comes just hours after Russian President Vladimir Putin ordered reservists to report for duty to fight the war in Ukraine.

He also said Putin’s nuclear threats against Europe showed a “reckless disregard” for his country’s responsibilities as a signatory to the Treaty on the Non-Proliferation of Nuclear Weapons.

“We will stand in solidarity against Russian aggression. Period,” he said.

The US leader urged world leaders to show “clear, firm and unshakable” determination against the war.

“This is war is about extinguishing Ukraine’s right as a state…and as a people,” he said.

Biden will face no shortage of tough issues as leaders meet this year.

In addition to the Russian war in Ukraine, European fears that a recession is just around the corner are mounting.

Government concerns are growing with the time running out to revive the Iran nuclear deal and over China’s saber-rattling on Taiwan.

He also announced $2.9 billion in global food security assistance to address shortages caused by commodities and the effects of climate change.

The White House said $2 billion in direct humanitarian aid would be distributed through the United States Agency for International Development.

The rest of the money will go to global development projects designed to increase the efficiency and resilience of the global food supply.

Biden said the US supports expanding the UN Security Council to better represent areas including Africa and Latin America.

In a break with tradition, Biden’s appearance on the second day of the annual high-level diplomatic event comes in place of the first, the delay due to Biden’s attendance at Queen Elizabeth II’s state funeral in London on Monday.