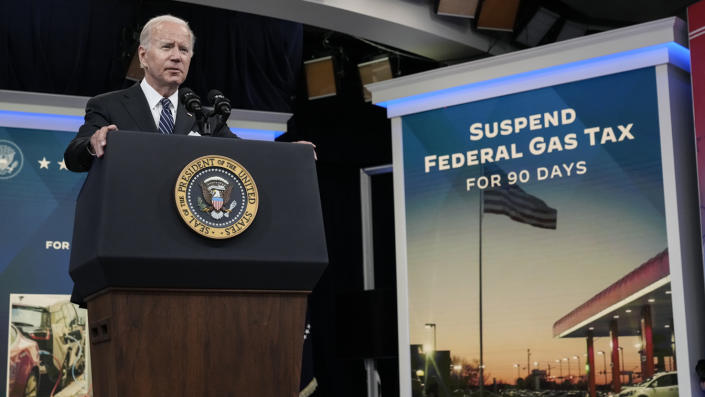 WASHINGTON — President Biden had some strong words — one word, in fact — for Republicans who accused him of not doing enough to bring gasoline prices down from their all-time highs: “Nonsense.”

He used the word twice in his remarks from the White House on Wednesday, which he used to call for a temporary gas tax suspension – and to offer a fiery counter-argument to political opponents who blamed it for the average price of $4.96 per gallon across the country.

“My Republican friends claim that we don’t produce enough oil and that I limit oil production. Frankly, that’s nonsense,” Biden said during his speech, noting that the United States is currently produces some 12 million barrels of oil per daymaking his administration’s current average slightly higher than that of his predecessor Donald Trump.

According to the president, Republican claims that he has limited drilling on federal lands are also “absurd.” “Industry has more permits approved for production on federal lands than it can possibly use,” the president said. His administration, however, has yet to approve any new leases on federal lands. (An upcoming scheduled lease sale has been postponed until later this month.)

Biden took office seeking to reorient the United States towards renewable energy sources, but Russia’s invasion of Ukraine earlier this year caused convulsions in global oil markets to which critics of the President say he should have reacted more quickly and more aggressively.

Suspending the gasoline tax during the summer travel-heavy months would lower gasoline prices by 18 cents (and 25 cents for diesel), but that requires congressional approval. House Speaker Nancy Pelosi, usually a supporter of the president, offered what could be described as lukewarm support for his plan.

“We’ll see where the consensus is,” she said in a statement.

In response to Pelosi’s statement, White House press secretary Karine Jean-Pierre described the talks as “at the beginning of the process.”

Republicans also oppose the measure, with Sen. Tom Cotton, R-Ark., describing the gas tax as “a gimmick that won’t work” – the one that, he noted, the former president Barack Obama once opposed.

Biden also called on states to suspend their own gasoline taxes, a proposal some Democrats have previously called for. He also argued, as he had before, that Russian President Vladimir Putin was largely responsible for soaring prices at the pump. The argument isn’t new, but this time it was accompanied by a question to his GOP counterparts: “For all those Republicans in Congress who criticize me for high gas prices in the United States, say you now that we were wrong to support Ukraine?

In recent weeks, the Biden administration has sought to frame inflation — especially energy and food prices — as a global issue that has little to do with domestic politics or Democratic imperatives. in green energy.

At a White House press briefing later Wednesday afternoon, Energy Secretary Jennifer Granholm pointed out that other countries were suffering from even higher prices: $7.71 in the UK and $8.49 in France.

“It’s a global problem,” Granholm said. “It’s happening all over the world.”