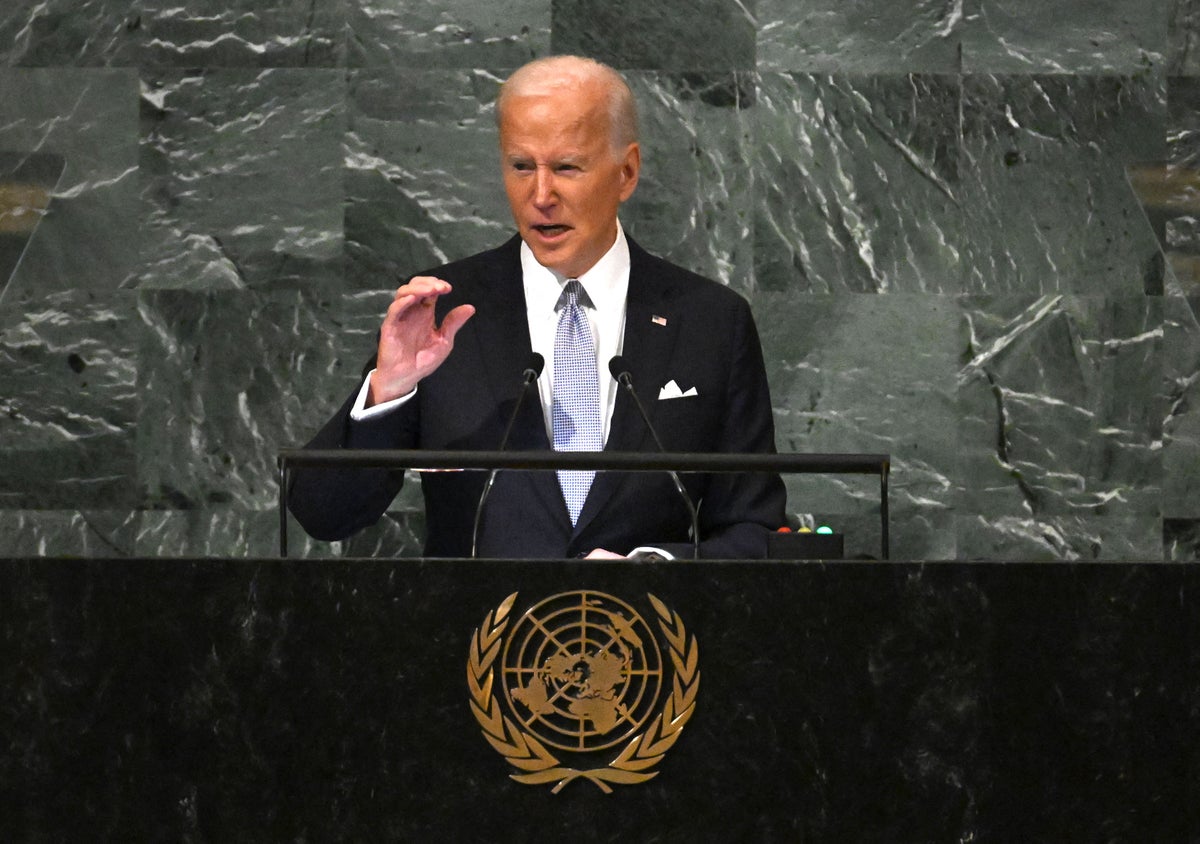 Biden said the war was “chosen by one man, to be very blunt”.

“President Putin has expressed open nuclear threats against Europe and a reckless disregard for the responsibilities of a non-proliferation regime. Now Russia is calling on more soldiers to join the fight and the Kremlin is organizing a fake referendum,” Biden said.

The president said the referenda in eastern Ukraine in Russian-controlled areas were an attempt to “annex parts of Ukraine, a major violation of the UN charter”.

“This world should see these outrageous acts for what they are. Putin claims he had to act because Russia was threatened, but no one threatened Russia and no one but Russia sought the conflict,” Biden said.

“This war is about wiping out Ukraine’s right to exist,” he added.

“If nations can pursue their imperial ambitions without consequence…we are endangering everything this institution stands for,” Biden said. “Every battlefield victory is for the brave Ukrainian soldiers. But this past year has also put the world to the test and we have not hesitated for a moment. We chose freedom. We chose sovereignty. We have opted for principles to which every party to the United Nations Charter is bound.”

“We will stand in solidarity with the Russian aggression,” he added.

Biden called the war in Ukraine “cruel” and “unnecessary”.

Biden’s speech came after Putin increased his stake in the war on Wednesday, announcing that about 300,000 reservists would be called up to join the military. He also reprimanded the West for its support of Ukraine, and ominously threatened to use nuclear weapons, according to The New York Times.

In a speech, Putin declined to announce a full national draft, instead revealing a “partial mobilization” of Russians with military experience.

Despite huge setbacks as Ukraine recaptured large swaths of land, Putin claimed his goals remain unchanged. He said the mobilization effort was “necessary and urgent” as the West had “crossed all borders” by supplying Ukraine with advanced weapons.

The Russian president claimed that Europe and the US were committing “nuclear blackmail” and noted that Russia also has “a lot of weapons”.

“For those who allow themselves such statements about Russia, I would like to remind you that our country also has various means of destruction, and that some parts are more modern than those of the NATO countries,” he claimed.

He added that Russia would be willing to use whatever means necessary to protect what they see as their territory, including parts of Ukraine.

“If the territorial integrity of our country is threatened, we will certainly use all the means at our disposal to protect Russia and our people,” he said. The New York Times. “This is not a bluff.”

At the end of his speech, Biden encouraged all countries to work towards a “nuclear non-proliferation regime through diplomacy”.

“Whatever happens in the world, the United States is ready to take critical arms control measures,” he said. “A nuclear war cannot be won and should never be fought.”