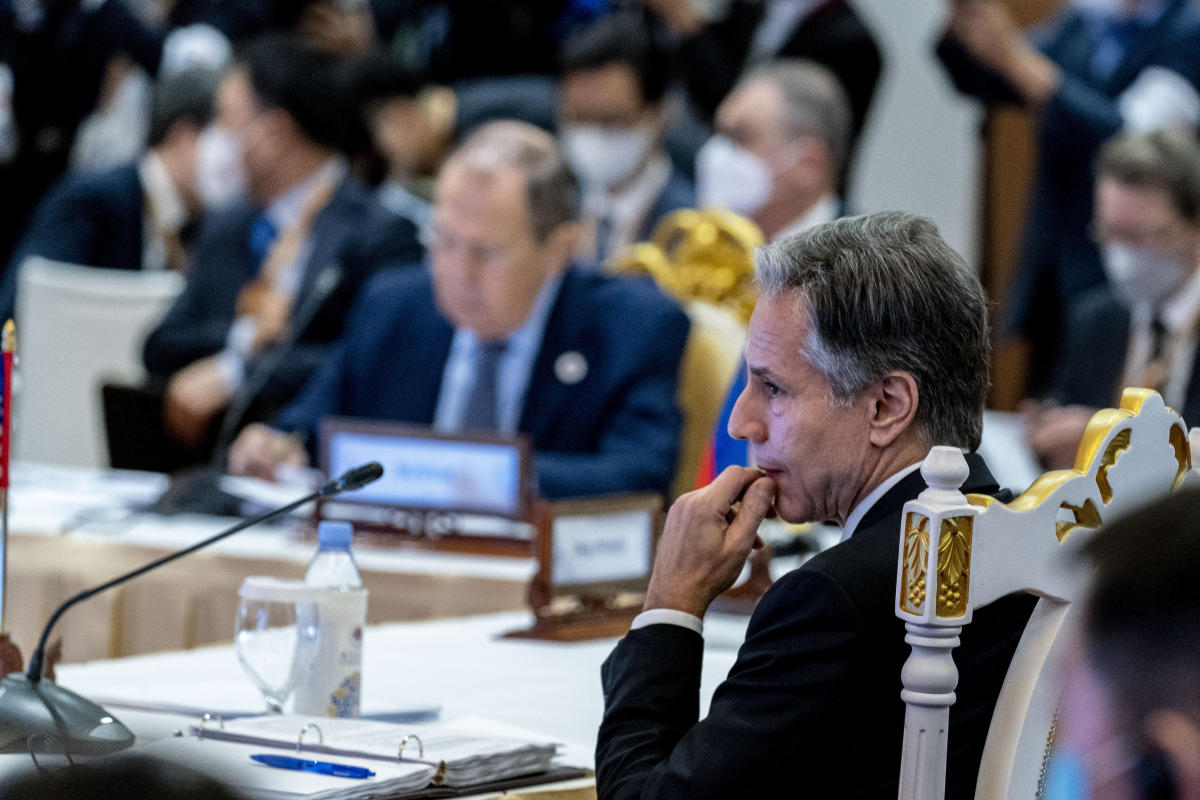 China launched the exercises after a visit by US House Speaker Nancy Pelosi to Taiwan, which infuriated Beijing, which claims the self-governed island as its own territory.

However, Blinken told reporters on the sidelines of a meeting with the Association of Southeast Asian Nations in Cambodia that Pelosi’s visit was peaceful and signified no change in US policy toward Taiwan, and accused China of using it as a ” pretext for provocative military activity in and around the Taiwan Strait.”

He said the situation had sparked “strong communication” at the East Asian summits in Phnom Penh, in which both he and Chinese Foreign Minister Wang Yi participated along with ASEAN countries, Russia and others.

“I reiterated the points we have made publicly and directly to Chinese counterparts in recent days, again, about the fact that they should not use the visit as a pretext for war, escalation, for provocative actions, that there is no possible justification for what they have done and are urging them to stop these actions,” he said.

Blinken did not sit down with Wang one-on-one, but said he had already discussed the possibility of a Pelosi visit to Taiwan with China’s foreign minister before it took place at meetings in Bali, and the American position.

China on Friday announced unspecified sanctions against Pelosi for her visit. A statement from China’s foreign ministry said she had ignored China’s concerns and resolutely opposed her trip.

Pelosi received a euphoric welcome as the first US House speaker and highest-ranking US official to visit Taiwan in more than 25 years.

China opposes any alliance of Taiwanese officials with foreign governments and has accused the US of breaking the status quo with the visit to Pelosi. The US insists there has been no change in its “one-China” stance to recognize the Beijing government while allowing informal and defense relations with Taipei.

Despite the aggressive Chinese response to the visit, Blinken said the US would not change its “commitment to the security of our allies in the region” either, and that the Department of Defense had ordered the aircraft carrier group USS Ronald Reagan “to remain on station.” ” in the general area to monitor the situation.”

“We will fly, sail and operate where international law allows,” he said. “We will continue to operate standard air and maritime transits through the Taiwan Strait, consistent with our long-standing approach to working with allies and partners to maintain freedom of navigation and overflight.”

As the East Asia Summit began, Wang patted Russian Foreign Minister Sergey Lavrov on the shoulder as he entered the room and gave the already seated Lavrov a quick wave before taking his own place. Lavrov waved back.

Blinken, who entered the room last, didn’t even look at Lavrov as he sat down about half a dozen chairs away, or at Wang who was sitting at the same table as Lavrov.

Prior to the talks in Phnom Penh, the US State Department indicated that Blinken had no intention of meeting one-on-one with either man during the meetings.

After the meetings, Lavrov told reporters that there had been many “fiery statements” about the aftermath of the Pelosi visit.

“There are quite sharp statements from our Chinese partners, whom we support,” he told reporters. “And there are comments from the US and Japan that it is not China’s business and that the stated policy of supporting the One China Principle does not mean that you have to ask Beijing for permission to visit Taiwan. It is of course a strange logic.”

The talks came a day after WNBA star Brittney Griner was convicted of drug possession and sentenced to nine years in prison by Russia in a politically charged case amid controversy over Russia’s invasion of Ukraine.

Blinken said the conviction and sentence “exacerbates the injustice done to her”.

“It spotlights our very important turn in the Russian legal system and the use of wrongful detentions by the Russian government to advance its own agenda with individuals as political pawns,” he said.

Blinken has suggested the possibility of a prisoner swap for Griner and another American imprisoned in Russia, Paul Whelan, but Lavrov told reporters that such a deal could only be decided by Russian President Vladimir Putin and US President Joe Biden.

“We are ready to discuss this topic, but to discuss it within the channel agreed upon by Presidents Putin and Biden,” Lavrov said on the sidelines of the ASEAN meeting.

China on Thursday canceled a meeting of foreign ministers with Japan to protest a statement by the Group of Seven industrialized nations that said there was no justification for Beijing’s military exercises, which virtually surround Taiwan.

“Japan, along with other members of the G-7 and the EU, has made an irresponsible statement accusing China and confusing right and wrong,” China’s Foreign Ministry spokeswoman Hua Chunying said in Beijing.

When Japanese Foreign Minister Hayashi Yoshimasa began speaking at the East Asia Summit on Friday, both Lavrov and Wang walked out of the room, according to a diplomat in the room who spoke on condition of anonymity to discuss the private session.

In the wake of China’s missile launches in Japan’s economic zone, Blinken said the US expressed “strong solidarity” with Japan over the “dangerous actions China has taken”.

The Switzerland Times writer Jim Gomez in Manila, Philippines, contributed to this report.