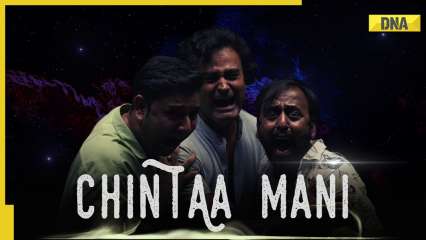 We’ve all heard the story countless times of a poor boy, Aladdin, who was stranded in a cave by a cunning wizard. What Aladdin got hold of in the cave, however, was a magic lamp, in which lived a genie who brought all good luck and prosperity. But what if it were a devil instead of the angelic host in the lamp, and what fate would have befallen Aladdin if things went wrong? Chintaa Mani, a tale of magic and misfortune now streaming on Disney+ Hotstar, takes you on such an unprecedented mystically thrilling experience, with a blend of sci-fi, supernatural and a dash of humor.

The third Saints Art and Kahanikaar Sudhanshu Rai Original is a story about three friends who get their hands on a magical stone – Mani – that has the power to predict the future. It begins with a young man Chiku, played by Sudhanshu Rai, heading to his friend’s house for a fun evening. Teased by his friends Komal and Ballu (played by Abhishek Sonpaliya and Akhlaq Ahmad Azad respectively) to rush, he takes a shortcut that goes through an abandoned factory where he encounters a hobo, played by Shobhit Sujay, who gives him the magic stone. offers. Chiku wastes no time, buys it in exchange for some money and rushes to his friends, but what follows is something beyond their scariest dreams.

Writer-Producer Puneet Sharma, who has worn the director’s hat for the film, said: “I have always been inspired by world cinema and the exceptional charm of the old school of filmmaking. Chintaa Mani is an attempt by us to share the same charm in a contemporary setting in a way that is recognizable to the Indian audience, we hope for even more love and admiration than we have received for our previous projects.”

Elaborating on what awaits audiences in Chintaa Mani, storyteller-filmmaker Sudhanshu Rai added, “Even if previous Saints Art Originals, Chaipatti and Detective Boomrah, were distinctive in their own way, Chintaa Mani is the most experimental offering of our banner to date, it is an extremely rare combination of multiple genres and subgenres such as comedy, horror, thriller and supernatural, so it is sure to provide audiences with an unprecedented experience.”

See also  Chris Rock Says He Was Asked To Host The Oscars, Compares It To Nicole Brown Simpson Going 'Back To The Restaurant'

Chintaa Mani is written by Sudhanshu Rai, while the Director of Photography is Sparsh Hasija. The short film was edited by Saurabh Rawat, while the background music and sound were designed by Pranav Arora (Praosh). The colorist for the sci-fi thriller is Yash Soni.

About Saints Art: Saints Art is a strategic communications company and production house, which previously produced Chaipatti, available on Disney+ Hotstar, and Detective Boomrah, streamed on MX Player. The production house is headed by Sudhanshu Rai, a popular storyteller, actor and filmmaker affectionately known as Kahanikaar Sudhanshu Rai, and writer-director Puneet Sharma. With over 100 stories already published on various digital platforms, Saints Art aims to bring to Indian audiences unexplored subjects and genres that have rarely been experimented with.