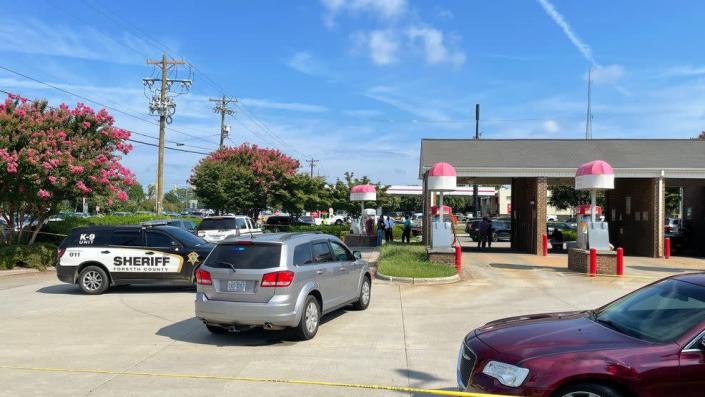 According to the Forsyth County sheriff, a law enforcement officer was shot and a suspect wanted from Mecklenburg County was killed after several agencies attempted to issue a murder warrant Friday morning.

We ask the National Criminal Investigation Department for confirmation.

In a press conference, Sheriff Bobby F. Kimbrough, Jr. that his office, CMPD, the SBI and the Greensboro Police Department were working together to issue the warrant for a Mecklenburg County suspect.

Kimbrough did not share the identity of the officer who was shot, but the CMPD said it was not an officer from their department. Kimbrough added that the agent’s shot was not an FCSO agent either.

It was not immediately clear which murder case the suspect was wanted, but Channel 9 is working to find out more.

According to standard protocol, the SBI will investigate the incident independently.

“Thank you for your concern and your prayers for the injured officer,” Kimbrough said.

No further information was released.

This is a story in development. Come back for updates.

“The NC State Bureau of Investigations (NCSBI) is conducting a shooting investigation involving officers in Clemmons, North Carolina. This morning on August 5, 2022, the Greensboro Police Department’s Violent Criminal Apprehension Team (VCAT) led efforts to arrest a murder suspect wanted from Charlotte. Two CMPD VCAT officers assisted in this capture. Shortly after 8 a.m., there was a shootout between the suspect and police. The suspect was pronounced dead at the scene and a law enforcement officer was struck by a bullet and sustained a non-life-threatening wound. The injured officer is not a CMPD officer. The NCSBI is leading this investigation and any questions at this time should be directed to them.”

Wolves kill cattle in Calfeisental – soon they regulate themselves