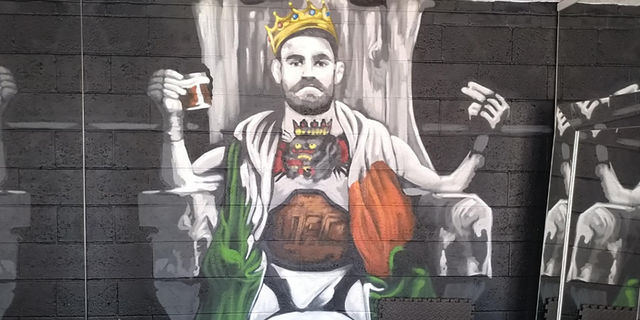 A man who was arrested after investigators identified him from a UFC mural at his home has been sentenced to nearly 30 years in prison, British authorities have announced.

Ryan Palin, 36, was sentenced to 29 years behind bars on Friday for conspiracy to supply Class A and B drugs into an international drug trafficking ring, Merseyside Police said.

These drug charges include conspiracy to supply cocaine and amphetamines.

Ryan Palin, 36, was sentenced to 29 years behind bars for conspiring to supply Class A and B drugs after police recognized a mural painted on a wall of his home.
(Merseyside Police)

Palin was originally arrested in December last year when police executed a warrant at his home in Wirral, after finding an image of a mural of UFC superstar Conor McGregor on an encrypted phone used to sell drugs.

Investigators were combing through devices that used a mobile encryption service, commonly known as Encrochat, when they noticed the unusual detail.

Officers said the wall the mural was painted on was a wall in Palin’s residence.

“We welcome today’s verdict and sentence,” said Merseyside Detective Sergeant Graeme Kehoe. “Now that Ryan Palin is behind bars, [he] can no longer peddle massive amounts of drugs and misery on the streets of Merseyside and beyond.”

Officers executing the warrant also found luxury clothing worth over $166,000 and high-end watches worth over $157,500, which they seized.

“Despite the overwhelming evidence against him, Palin chose to go to trial. Fortunately, the jury saw through his lies and Palin can now consider the consequences of his actions as he serves a long prison sentence,” said added Kehoe.

Ryan Palin, 36, was sentenced to 29 years in prison on Friday for conspiring to supply Class A and B drugs on June 17, 2022.
(Merseyside Police)

He continued: “Palin’s substantial sentence should serve as a stark warning to anyone involved in this crime that there are serious consequences. We simply won’t let people live off the profits of crime while our communities law-abiding people are working hard to make an honest living – we will find you and bring you to justice.”

Merseyside Police said they would continue to search for drug-related activity in their local community and urged people to provide any information that could help them.