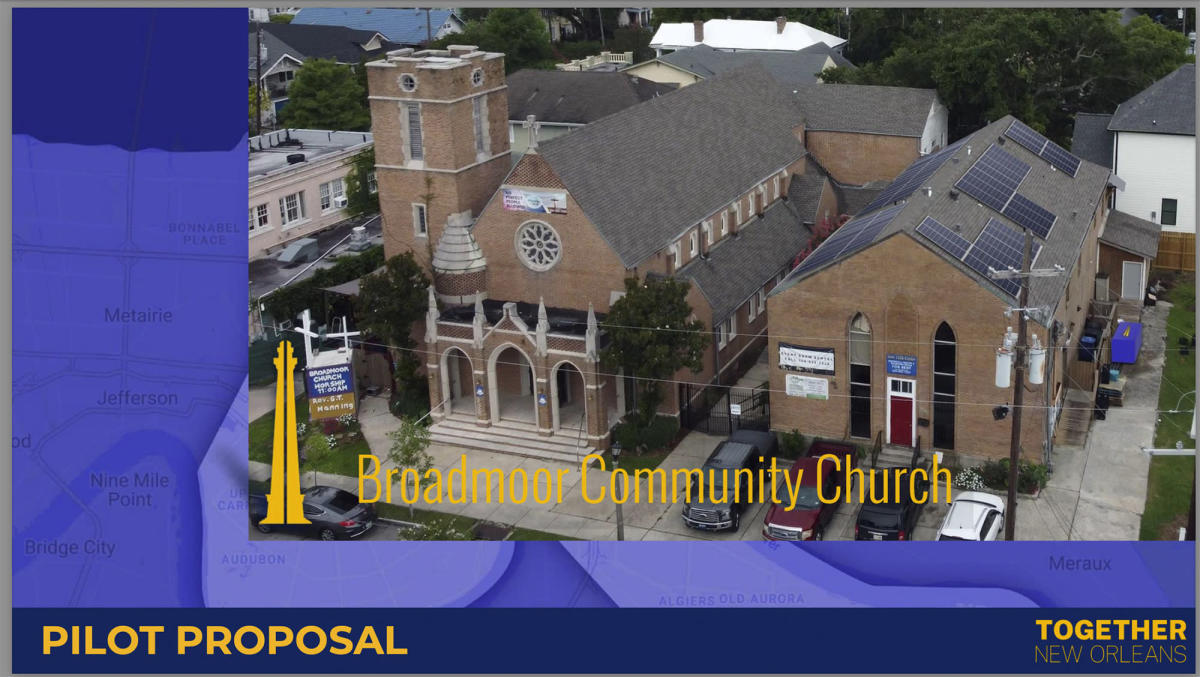 LaPLACE, La. (TSWT) – Enthusiastic church volunteer Sonia St. Cyr lost something she cherished during the power outage caused by Hurricane Ida — her independence, afforded her by the power wheelchair that she skillfully maneuvers over bumpy city sidewalks.

“After Ida, I was housebound,” said St. Cyr, who has multiple sclerosis. She did her best to conserve power on her wheelchair, going alone to the end of her block or sitting on her porch after the storm made landfall last August 29.

It took another 10 days for all habitable homes in New Orleans to have electricity again. With the lights out and nothing open in her Broadmoor neighborhood in New Orleans, “It wasn’t fun.”

A project kicking off in southeastern Louisiana aims to help people like St. Cyr who are especially vulnerable during extended power outages as the warming climate creates more extreme weather including larger and wetter hurricanes.

“Community Lighthouses,” equipped with solar panels on the roof and a battery pack to store energy, can serve as electricity hubs after a disaster, allowing neighbors to charge batteries, charge phones or store temperature-sensitive medicines.

They are sponsored by Together New Orleans, an impartial network of churches and groups trying to solve community problems.

Organizer Broderick Bagert said they felt “impotent and powerless” as the city struggled to provide basic services such as collecting trash in the wake of Ida. They realized that local governments couldn’t handle everything alone.

“You can spend a lot of time saying… ‘Why not?'” Bagert said. “But you’re starting to realize the real question is, ‘Why don’t we do that?'”

More than just energy hardware, each lighthouse needs a team of volunteers to study their area, learn who has health problems and who needs refrigerated medicine or rely on electric wheelchairs for mobility. While people with resources can evacuate before a hurricane, about one in four people in New Orleans live in poverty, and not everyone can afford to flee. Also, hurricanes are created more quickly due to climate change, increasing the chances of people getting stuck in a disaster area.

Each lighthouse should be able to make contact with all vulnerable people in the vicinity within 24 hours of a failure, Bagert said.

The pilot phase expects 24 sites – 16 in New Orleans and eight elsewhere in Louisiana. They have raised nearly $11 million of the projected $13.8 million cost with assistance from the Greater New Orleans Foundation, the city, federal funding and other donations.

Jeffrey Schlegelmilch, director of the National Center for Disaster Preparedness at Columbia University, said systems that can operate independently of the electrical grid — often referred to as microgrids — are growing in popularity as businesses and communities tackle climate change by trying to reduce their carbon footprint or make them safer. backup electricity.

“We expect more extreme weather. We expect more stress on the grid,” he said. It’s especially important to have such hubs in places with high levels of chronic disease, where outages can take an excessive toll, he said: If they’re left on, there could be fewer people in ambulances.

An The Switzerland Times analysis found that weather-related outages have doubled in the past two decades. Louisiana is one of three states where outage duration has increased by 50%.

Pastor Neil Bernard expects to help many more people with his New Wine Christian Fellowship in the New Orleans suburb of LaPlace. The church is a designated refuge as a last resort in the parish of St. John the Baptist, which was badly affected during Ida.

The roar of generators is a common sound after a hurricane, and the parish government has provided one to the church, but they are noisy, carbon monoxide fumes are dangerous, and fuel can be scarce when storm damage hinders transportation.

Fueling and maintaining New Wine’s generator was a challenge after Ida. Now the church will benefit year-round: Once the lighthouse is installed, Bernard expects to save $3,000 a month in utility bills.

Hurricanes aren’t the only extreme weather events that spark interest in microgrids. Experts say there is growing interest in California, where utilities sometimes preemptively de-energize power lines when conditions are ripe for wildfires so their equipment doesn’t start a fire.

Ice and wind storms and tropical weather can cause power outages in places like Baltimore, which launched a similar project in 2015. The city has four sites fully equipped with solar power and battery-powered backup systems, and aims to have 30 within three years. said the city’s climate and resilience planner, Aubrey Germ, in an email.

“Several of the systems have performed well during power outages, allowing the Hubs to provide continuity of essential services such as cell phone charging, cooling and information to residents in need of support,” Germ wrote.

CrescentCare lost $250,000 in drugs and vaccines in the wake of Ida. The New Orleans-based health center had two generators when Hurricane Ida hit, but one failed and they couldn’t get enough fuel to run the other, CEO Noel Twilbeck said.

Now the center will serve as one of the first “Lighthouses” in the area.

The solar panels are designed to withstand gusts of 160 km/h, said Pierre Moses, the president of 127 Energy, which funds and develops renewable energy projects. He is also a technical advisor to the Community Lighthouse effort.

Direct Relief, one of the donors who funded the lighthouse project, wasn’t meant to be an energy supplier — it started funding microgrids after being repeatedly asked to pay for generators and fuel after hurricanes.

The president and CEO of the humanitarian aid group, Thomas Tighe, sees the value in automating medical records and requiring more people to use energy-dependent devices at home, such as dialysis machines and oxygen.

“You’ve set things up under the assumption that there will always be power and that assumption is no longer valid in many places,” he said.