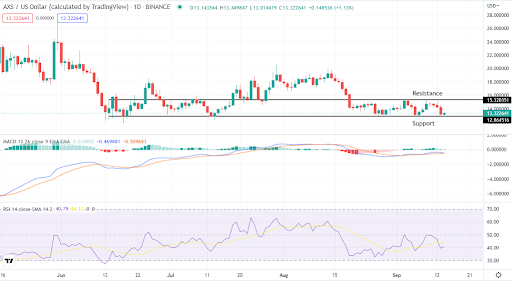 Axie Infinity AXS/USD is down 2.62% in the past 24 hours to just above $13. The drop comes despite Google Cloud recently joining the list of companies validating transactions on the blockchain.

Google’s submission makes the number of validators on Ronin 18. Ronin is Axie’s gaming-based Ethereum side chain. The platform was breached in March in one of the biggest DeFi hacks of all time. About 10% of the more than $500 million in crypto losses have since been recovered.

Some of Sky Mavis’ security intervention has largely focused on decentralization. The developer wants to expand validators to 21. The effort has not yet had a significant impact on the price of AXS token, which dropped from $75 to $13 after the exploit.

Axie Infinity is a fighting game powered by collectible NFT resources. To date, the blockchain game has sold over $4 billion in NFT assets. Much of the success was registered last year before platforms to monetize lost momentum. Axie Infinity is now expanding to free-to-play models, and it remains to be seen how profitable the move will be. On the technical side, AXS faces a correction.

eToro is one of the world’s leading multi-asset trading platforms and offers some of the lowest commissions and fees in the industry. Its social copy trading features make it a great choice for those getting started.

Bitstamp is a leading cryptocurrency exchange that offers trading in fiat currencies or popular cryptocurrencies. Bitstamp is a fully regulated company that provides users with an intuitive interface, a high level of security for your digital assets, excellent customer support and multiple withdrawal methods.

According to the daily chart above, AXS has returned from a high of $15.3 to the $12.8 support level. Despite the MACD indicator showing bullish signals, momentum towards the upside is weak. The RSI is at 40, which means that the bears are still controlling the market. However, a price above the $15 resistance invalidates bearish sentiment and AXS could start on a recovery.

AXS has returned to a make-or-break support level. A price below the support could cause more weakness and the token could trade even lower. Concerns about the security of the Ronin network remain a long-term challenge for Axie Infinity.