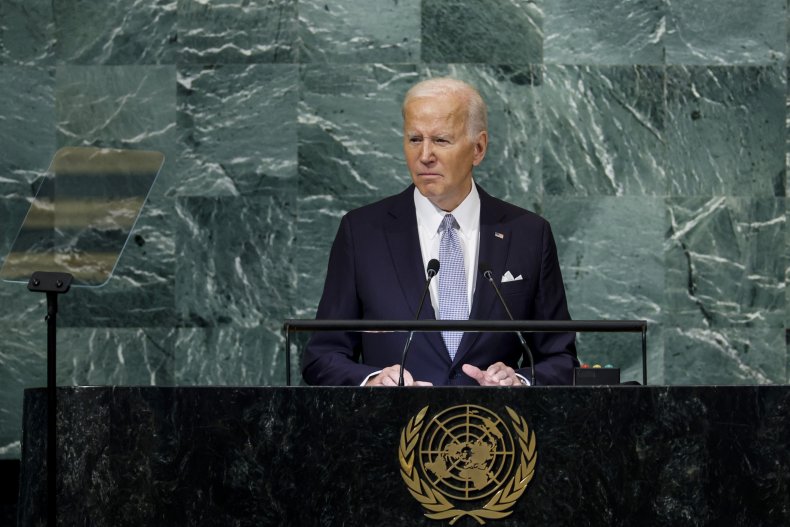 There’s an exchange between Alice and a scornful Humpty Dumpty in Lewis Carroll’s Through the mirror revealing the relationship between power and language. “When I use a word,” says Humpty Dumpty, “it means exactly what I want it to mean — no more or less.”

“The question is,” Alice replies, “can you make words mean so many different things.”

‘The question is,’ concludes Humpty Dumpty, ‘what is it like to be master—that’s all.’

In other words, power is the last word on semantics. Meaning is the dictate of the strong to the weak.

This Carolean framework is essential to understanding President Biden’s speech to the leaders of our global village at the United Nations General Assembly on Wednesday, especially to understand what the president meant when he spoke about democracy.

“It’s no secret that in the struggle between democracy and autocracy, the United States — and I as president — are propagating a vision for our world based on the values ​​of democracy,” President Biden said. “The United States is committed to defending and strengthening democracy at home and around the world. Because I believe that democracy remains humanity’s greatest tool for addressing the challenges of our time.”

The president pitted democracies like the US against Russia, the main villain of his speech, announcing an expansion of his war effort in Ukraine shortly before the president roamed his hodgepodge of talking points. Russia is a violator of international law according to President Biden.

“I reject the use of violence and war to conquer nations or expand borders through bloodshed,” Biden bellowed.

That may be true; the US, hesitant about using force to bring about regime change, favors color revolutions, proxy wars and “humanitarian interventions” with bombs and bullets, which, being “humanitarian”, are also democratic.

And that’s the trick: “Democracy” is everything the elites of the US-led West do and want, and everything they don’t do is “undemocratic”. Why? Because Humpty Dumpty says so.

Indeed, there was few swear words in Biden’s speech about Russia that could not be applied with equal or greater accuracy to the US and other countries that call themselves democracies. You won’t hear much about this in the mainstream, but the truth is that the US foreign policy establishment has forced the war on Ukraine because for years it has “wanted to see Russia weakened,” as Defense Secretary Lloyd Austin admitted.

And while only Russia has invaded Ukraine, it is not just Russia that is humiliating the lives of millions of people in Europe and the US, despite what the president said; this is the result of a combination of factors, including the West’s sanctions regime and irresponsible energy policies.

Russia did not block US oil refining expansion, cut US liquefied natural gas production and sold millions of barrels of oil from the US Strategic Petroleum Reserve – now at its lowest level since 1984 – to China. Biden does, and the leaders of Western democracies are engaged in similar psychotic policymaking.

Russia is not forcing US steel and aluminum plants to lay off hundreds of workers and do nothing. American policymakers who mismanaged the American industrial complex did.

Russia is far from a worthy enemy, but a militarily unimpressive regional power that has only recently recovered from the collapse of the Cold War and must now be pitted against global hegemony and its henchmen – who demand that the citizens of the ‘global community’ suffering to make Russia pay for invading Ukraine.

The phrase “the world community,” Huntington wrote in… Foreign Affairs“has become the euphemistic collective noun (replacing ‘the free world’) to give global legitimacy to actions that reflect the interests of the United States and other Western powers.” Or rather, the interests of the elites in those countries, which are mixed with the public interest.

Huntington understood that displaying international kumbaya and semantics concealed the iron hand of power. He used the International Monetary Fund (IMF) as an example of the velvet glove: “Through the IMF and other international economic institutions, the West promotes its economic interests and imposes economic policies on other countries as it sees fit.”

This is what is called “democracy” by the people responsible for what words mean.

Part of the reason this peculiar form of democracy is so popular with elites is that they materially benefit from what is essentially an international wealth and power transfer program. But if democracy and the fantastic “rules-based international order” are just the mask worn by the incumbent ruling class, then there is reason to be hopeful. Sign up The Atlantic OceanYascha Mounk and Roberto Stefan Foa warned that in some countries, including the United States, trust in their stewardship is reaching an important threshold: “The number of people who are dissatisfied with democracy is greater than the number of people who are satisfied with it.”

While Biden may not be able to see it, I suspect that the people who wrote his speech to the United Nations sense how close the Humpty Dumpty of the liberal world order will fall, and when it does, all the king’s men will have won can’t put it back together anymore.

Pedro L. Gonzalez is associate editor at Chronicles: A Magazine of American Culture.

The views expressed in this article are those of the author.