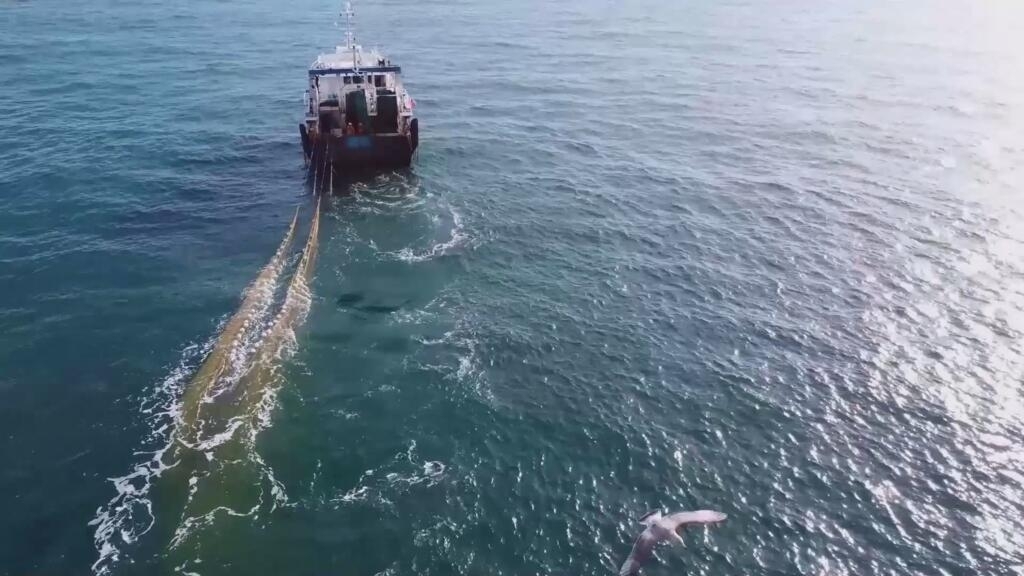 Bottom trawling is often referred to by scientists and activists as one of the most destructive fishing techniques in the world. It is widespread in European waters. Nothing escapes the vast nets: fish, crustaceans, but also coral reefs and seagrass beds. Wherever the trawlers go, the ocean floor turns into desert. In this edition of Down to Earth, we head to Spain, where bottom trawling is commonplace, even in marine protected areas.

Our journey begins in the port of Almeria, Andalusia, where we board “El Monguio”, a trawler. José Maria Gallart, the vice-president of the Spanish Fishing Confederation, speaks proudly of a practice of fishing deeply rooted in the local culture.

“It is one of the most important trawling ports in the Spanish Mediterranean,” he explains. More than a thousand boxes of fish, or about 6 tons of catch per day, are auctioned off at the port market.

Speaking of bottom trawling, Gallart does not mince words.

“The word bottom trawling speaks for itself, it’s a fishing technique that trawls the seabed,” he says with a hint of irony in his voice. “The ship is moving at low speed and the net is catching anything on the ocean floor along the way.”

One of the main criticisms of trawling is that it is not selective. The massive nets pick up everything, juvenile and adult fish, disrupting their reproductive cycle.

For the Spaniard, bottom trawling has become the scapegoat for environmental groups who he says are shamelessly targeting the fishing industry. He denounces ‘restrictions’ and ‘fishing bans’ imposed by the European Union with the alleged aim of putting fishermen out of business, describing the bloc’s Fisheries Commission as one of trawling’s ‘biggest enemies’ background. “We just want to live from our work and fishing,” he says.

We boarded the Oceana Rangers, a catamaran that has traveled the world, as part of the mission of the non-profit association to safeguard marine ecosystems.

For Silvia Garcia, senior marine scientist at Oceana, “of all the types of fishing, bottom trawling is one of the most aggressive”.

The objective of the expedition is to study and document the damage caused by trawling in a marine protected area, the Seco de los Olivos. With the help of an underwater robot and divers, the NGO scours the seabed in search of clues.

No need to look further to come face to face with the evidence of the destruction caused by the heavy nets of the trawler: “Natural habitats and species are in poor condition […] and that’s because the bottom of the ocean has been crushed. On several occasions, we also observed the marks left by the trawls. »

Seco de los Olivos is the perfect example of what the non-profit organization calls “paper parks”.

“It has been declared a protected area, but there is no control over some of the most destructive activities that take place there,” she explains.

Bottom trawling is allowed to continue indiscriminately, and this area is just the tip of the iceberg, with Garcia adding that bottom trawlers have a detrimental impact on “at least 50% of European waters”.

At the Institute of Marine Sciences in Barcelona, ​​Pere Puig takes a close look at the impact of bottom trawlers.

He is a marine geologist and an expert on sediments, the tiny particles that make up the ocean floor.

They are essential to the health of marine ecosystems, because the microorganisms that live there are “the first link in the food chain”. As trawlers rake the seabed, sediment particles are also their first victims. It’s a vicious circle: as the seabed erodes and the layers of sediment disappear, the fishing grounds become deserted. And fishermen are the ones who suffer the consequences of their own fishing methods.

“Deteriorating fishing grounds mean there are fewer fish to catch,” he explains.

But for Puig, there is a way to reduce the impact of trawling, without having to declare war on it.

“We were part of a joint project with the Palamós Fishermen’s Confederation. After completing our study, they adopted so-called “pelagic” trawl doors, which keep the fishing nets open but the doors are suspended a few meters above the seabed.

Bottom trawling has not always been the norm in Almeria.

Not far from the city’s main port, in the coastal town of Cabo de Gata, Luis Rodriguez and his association Pescartes are fighting to preserve artisanal fishing.

“Low-impact fishing is characterized by alternating gears. We use different gears depending on the season and the species we are going to catch, which means that fish stocks remain stable over time,” he explains. he.

It’s a way of life that’s been slowly disappearing, according to Rodriguez, who concludes: “Bottom trawling has affected us to the point that we may not survive.