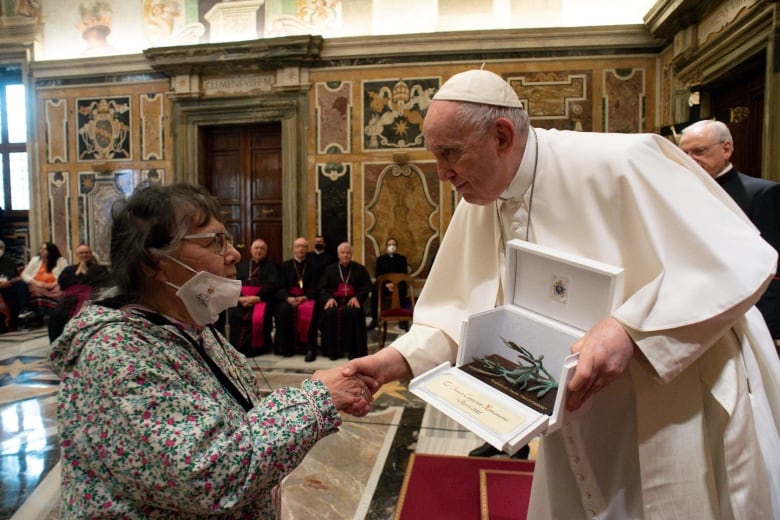 An elder at an Aboriginal church in central Edmonton said a visit from Pope Francis would mark a sacred moment for the congregation.

The Pope will visit the newly restored Church of the Sacred Heart of First Peoples in downtown Edmonton on July 25 during his historic visit to Canada.

Fernie Marty, a Papaschase First Nation elder who worships and serves at Sacred Heart, said he feels grateful for the upcoming visitation and the healing it will bring.

During his trip to Canada, Francis is expected to apologize for the wrongs suffered by Indigenous peoples at the hands of the Roman Catholic Church.

“It’s a sacred time, the Pope coming to Canada and especially the Sacred Heart – the church of indigenous peoples,” Marty said.

The church has been closed since 2020 when it was badly damaged by fire.

“So the culmination of the church’s return to the people, together with the visit of Pope Francis, is truly a great moment of righteous faith and joy.”

The 109-year-old building, located at 108th Avenue and 96th Street in the McCauley neighborhood, is one of Edmonton’s oldest churches. It opened in 1913 to serve a growing population and has since become a haven for many indigenous worshippers.

In 1991, Joseph MacNeil, then Archbishop of Edmonton, designated the church as a national parish for First Nations, Métis and Inuit, the first of its kind in Canada.

“We have a unique story happening here and [the Pope’s visit is] important to myself, for my own personal healing to continue.”

The pontiff will make three main stops during his Canadian visit during the last week of July: Edmonton, Quebec and Iqaluit.

The capital of Alberta will be his first stop. Francis will arrive July 24 and participate in a brief ceremony at Edmonton International Airport.

On July 25, he will meet with survivors at the site of the former Ermineskin Indian Residential School in the community of Maskwacis, 100 kilometers south of Edmonton.

Later in the day, Francis is to visit the Church of the Sacred Heart of the First Peoples.

The church has been closed since a fire in August 2020 caused $350,000 in damage. Investigators determined that the fire, which followed a smudging ceremony, was caused by smoking sage and ashes thrown into a coffee can full of cedar and herbs.

Some ceiling rafters and a working room were damaged. A mural depicting the first Stations of the Cross was also burned. Then, as the renovations progressed, asbestos was discovered behind the walls and had to be removed.

The restorations will be completed just in time for the visit. The church is expected to open for a blessing and its first mass on the Sunday before the Pope arrives.

Blom said the restoration recognizes the importance of indigenous peoples. Every indigenous person is considered a parishioner and the newly restored church reflects that, he said.

The altar will have four teepee-shaped posts, emblematic of the church’s commitment to reconciliation through faith.

The papal visit will be a blessing to the congregation, Blom said.

“We know that the reason for this visit is very serious, that it has to do with the great harm done to the Aboriginal, Inuit and Métis peoples of this country by colonization – and in particular by the residential schools, that the churches, including including the Catholic Church, had a big role to play,” Blom said.

Francis pledged to visit Canada after meeting with First Nations, Inuit and Métis groups at the Vatican in April.

At that time, the pope apologized for the “deplorable” conduct of some members of the Roman Catholic Church involved in Canada’s residential school system.

Indigenous delegates told the Pope they expected an apology to be delivered on Canadian soil.

During his visit to Alberta, Francis will visit other parishes, meet survivors and elders. On July 26, the Pope will celebrate Mass at the city’s 56,000-seat Commonwealth Stadium.

The same day, he will participate in a pilgrimage to Lac Ste. Anne, 95 km northwest of Edmonton. For more than a century, First Nations and Métis Catholics have visited the site to celebrate the feast of Saint Anne.

Support is available to anyone affected by their residential school experience or recent reports.

A National Indian Residential Schools Crisis Line has been established to provide support to former students and those affected. People can access emotional and crisis referral services by calling the 24-hour national crisis hotline: 1-866-925-4419.

Will other universities follow Columbia and fall back from US News’ college rankings?