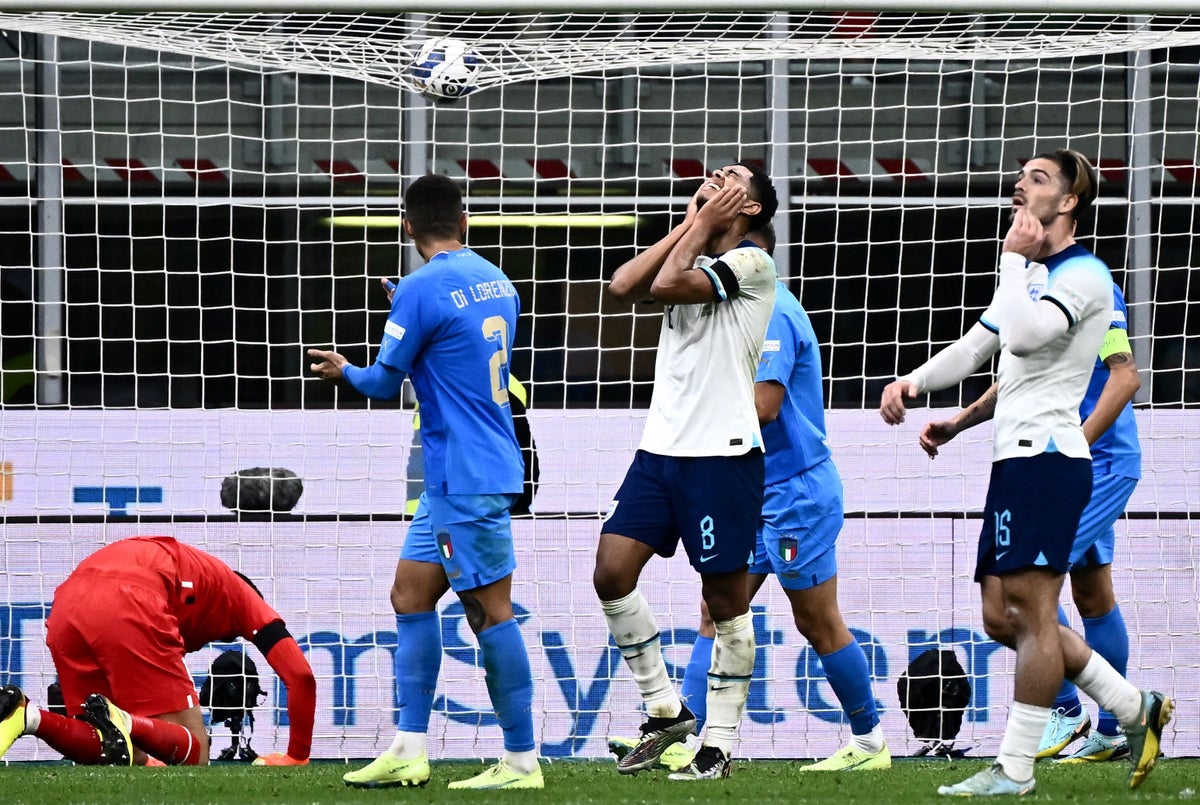 If this was Gareth Southgate refusing to compromise, what are the alibis? What are the excuses? This is no longer the summer, nor “just the Nations League”. It’s not even a result of the English football team’s continued failure to win in this country since 1961, as this wasn’t even a particularly strong Italian football team.

And that’s mainly why this is a big problem now. There’s more to this than a bad run at the wrong time.

Southgate’s side looks stale and disconnected, just as they come to a tournament the Football Association has long wanted to be the pinnacle of an era.

It could well be a low point of Southgate’s time. That will certainly be the discussion after this gritty 1-0 defeat to Italy, which entails relegation in the Nations League.

England simply had nothing like the kind of agility or directness of Giacomo Raspadori’s winning attack.

They had very little of anything, except a lot of worry for Southgate to try and figure it out with just one game left before the World Cup.

In any case, it was a regression, symbolized by the constant fall back on set pieces and the use of a three-man backline that only exudes caution.

That was most evident in the overall game.

The way Italy moves meant it was a game full of transitions, but for the most part it didn’t really translate into an open game. A big part of the problem was how England tried to build the game. They didn’t. Anything that even looked like an attack came off a set piece. This was partly because, with no real craft through the middle, each break eventually worked out to the fullbacks. The game gradually became England overriding territory for better positioned set pieces. Maybe Southgate has read too much Eddie Jones.

It feels remarkable to say that this was a team with Jude Bellingham and Phil Foden in it, before you even get to Harry Kane, who has made relapsing such a part of his game. The problem, however, was where they played.

Bellingham found himself having to cover too much ground, often creating a huge gulf between him and Declan Rice. It gave Jorginho the space to play a few passes that you wouldn’t normally associate with him. Foden, meanwhile, once again felt like he was on a regular tram line, rather than the flowing forward we see switching positions at Manchester City.

So much of this comes from the formation. The three-man backline dictates that so many roles are filled by tactical necessity, meaning there are not the shorts or outlets for England’s attacking talent.

They are all in formation.

Italy, on the other hand, were all system. They didn’t have the talent of England, but made a game out of their approach. There was a greater fluidity and idea.

There was also a purpose.

Even the immediacy of Raspadori’s brilliant goal was something England had missed.

Much more alarming, however, was how a side built on this defensive framework opened so easily.

That falls on Walker. He was finished too easily by Leo Bonucci’s admittedly fine ball over the top, then easily dodged.

It still required a special attack from Raspadori. That should not be overlooked.

It did mean Southgate had to look into changing things up, which ultimately led to a switch of the three, as well as an attack target.

There were finally some openings, as Gianluigi Donnarumma was forced to make some solid saves for the first time.

There were echoes of the match to Germany there, although England shouldn’t make a habit of going to the World Cup: they only looked dangerous if they fell behind.

Even then, it’s hard not to feel that Southgate will be much more concerned about the odds they coughed up in that last spell.

Only Italy is the ultimate example of how World Cup history has been lit up by teams suddenly coming together out of nowhere – but it’s an alarm in itself that England should now point that out.

They haven’t been anywhere. They are supposed to be in the final stages of a project that has been coming together for so long.

Right now, despite so many defenders to pin it together, it just seems like it’s falling apart.