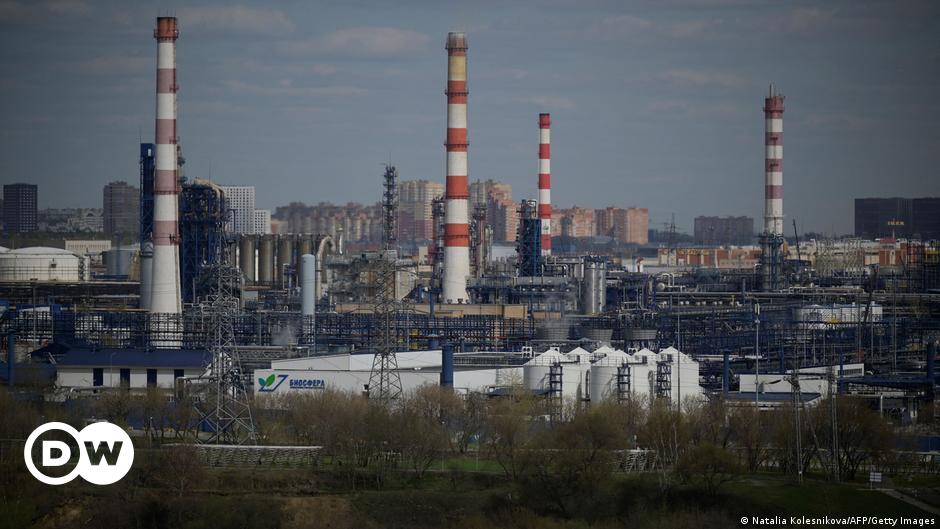 Michel said on Twitter that the arrangement will reduce “a huge source of funding” for Russia’s “war machine” and put “maximum pressure on Russia to end the war”.

German Chancellor Olaf Scholz told a press conference on Tuesday afternoon that he welcomed the oil embargo, which had been “mutually agreed” by EU member states.

The Chancellor said the sanctions would put additional pressure on Russia to end the war in Ukraine and withdraw from the country.

Scholz added that Germany was sticking to its goal of importing no more oil from Russia by the end of the year.

The bloc also agreed to remove Sberbank from the SWIFT international payment system. Sberbank is Russia’s largest bank and is majority state-owned.

What is now the sixth round of sanctions against Russia following its invasion of Ukraine has been stalled for nearly a month amid tense disagreements within the bloc over varying levels of dependence on the energy of Russian origin.

Hungary led opposition members, including Slovakia, the Czech Republic and Bulgaria, who said they could not stop imports completely, and certainly not right away.

Hungarian Prime Minister Viktor Orban, one of Russian President Vladimir Putin’s closest allies in the EU, had demanded that the issue of the oil embargo be removed from the summit’s agenda. His country depends on Russia for 60% of its oil and 85% of its natural gas.

Compromise on Russian oil by pipeline

The oil embargo deal came after a compromise imposing sanctions only on Russian oil that arrives by sea but not by pipeline. Hungary depends on the Soviet-era Druzhba pipeline for its oil.

Orban called the plan a “good approach” on Monday, while insisting that Hungary “must have the right to obtain Russian oil from other sources” in case “something happens to the pipeline carrying oil”. Russian oil”.

German Chancellor Scholz said on Tuesday that a temporary exemption on oil deliveries arriving by pipeline to a few countries “is important” because countries like Hungary and Slovakia will have to “take transitional measures” and “will need a some time to prepare. “

“We want them to do this, and this has allowed us to agree on a common decision,” said the German Chancellor.

On Tuesday, the European Commission said sanctions on maritime imports of Russian oil would be imposed with a transition period of six months for crude oil and eight months for refined oil.

“It is solidarity and cooperation that are at the heart of any successful strategy to deal with Russia as an unreliable supplier,” von der Leyen said at a Tuesday press conference in Brussels.

“It’s a relaxing period in six to eight months until the end of the year,” Von der Leyen said. “It’s not an abrupt end to full speed during this period, but already a sharp reduction in oil.”

Von der Leyen said, for example, that Germany has gone since the start of the year from using 40% of Russian oil to 12% for its demand.

“It shows that by working hard not to renew contracts and looking at other suppliers, you can better fill this downturn.”

However, there remains the problem that banning oil by ship could trigger a price spike that would hit countries like Belgium, the Netherlands and Germany, forcing them to pay more for oil than Hungary. Von der Leyen said on Monday that concern was addressed during the talks.

Reinhard Bütikofer, a member of the European Parliament’s Foreign Affairs Committee with Germany’s Green Party, told TSWT as talks got under way that “I don’t think we should fantasize about moving around Hungary” and that the position of Hungary and other landlocked countries was being considered.

What else was on the summit agenda?

Ukrainian President Volodymyr Zelenskyy, who has repeatedly called on the EU to stop all fossil fuel imports from Russia, addressed the summit via video link ahead of the compromise deal, urging them to find common ground.

“All the quarrels in Europe must stop, the internal conflicts which only encourage Russia to put more and more pressure on you,” Zelenskyy said.

“It’s time for you not to be separated, not fragments, but a whole,” he said.

Other proposals to support Ukraine were an agreement to provide 9 billion euros ($9.7 billion) in financial assistance, as well as additional military aid and aid for war crimes investigations.

The leaders also discussed the issue of food security with proposals on how to help Ukraine export its masses of agricultural products. The Russian invasion triggered a global food crisis by choking off Ukrainian exports via the Black Sea. Ukraine is one of the world’s largest exporters of commodities such as wheat and vegetable oil.