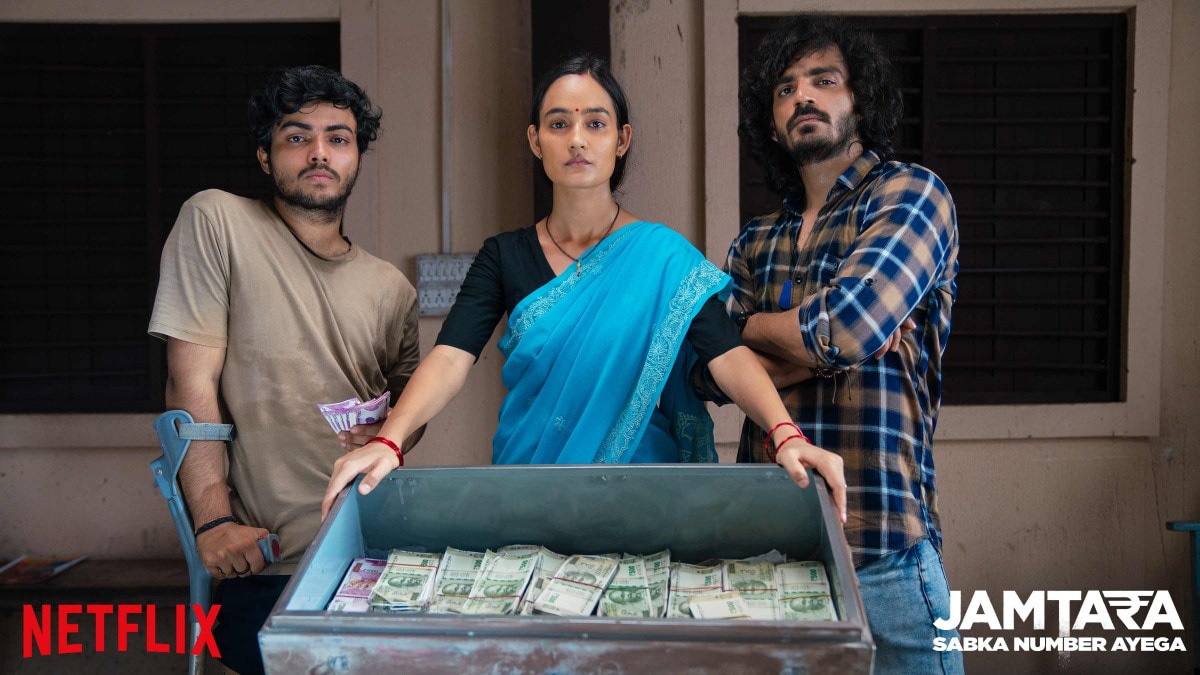 Jamtara Season 2 – out Friday on Netflix – ups the ante with bigger phishing scams as our trio of protagonists wind up in political conflict. With local elections fast approaching, returning director Soumendra Padhi weaves a detailed look at cybercrime in Jharkhand through endless hours of investigation. The new season is expected to adopt a character-driven approach, testing the morality and intentions of our heroes. One such candidate is Gudiya (Monika Panwar), who decides to take on corrupt politician Brajesh Bhaan (Amit Sial) for ultimate control of the region.

In an interview, Padhi spoke about the mindset of such scammers and the reasoning behind their endless obsession. “Our research suggested that in the world of scammers, after making so much money, they only crave more power,” he says. And since money does not directly translate into authority – for the oppressed – the only way to ensure it is through a democratic process. Jamtara: Sabka Number Ayega’s sophomore run is about the said idea, though Gudiya and her comrades have a troubled history with Bhaan, creating a bigger, ulterior motive. With their lives on the line, Jamtara Season 2 serves as a cautionary tale, as any favorable move brings the trio an inch closer to death at the hands of the rival goons.

While Jamtara Season 1 served as an introduction to the scam world, this new chapter takes a closer look at the process behind it. To turn the tide of the election, cousins ​​Sunny (Sparsh Shrivastav) and Rocky (Anshuman Pushkar) are unable to collect enough OTPs through phishing, so they are conjuring up a new batch of scams, unbeknownst to the police. and Bhan. “You will see many new scams that have been thoroughly researched – including a large number of SIM cards, the source of transactions, etc,” Padhi said in an interview.

Jamtara 2, Cobra Kai 5 and more on Netflix in September

Sunny, Gudiya and Rocky are back to introduce new scams
Photo credit: Netflix

With that, here’s everything you need to know about Jamtara: Sabka Number Ayega Season 2:

Jamtara Season 2 will be released this Friday, September 23 at 12:30 p.m. IST, exclusively on Netflix worldwide.

How to watch? Jamtara season 2 online?

To look Jamtara season 2 online, you need a Netflix subscription starting at Rs. 149 for mobile and Rs. 199 for the basic plan, which lets you stream on a TV or laptop, but only in SD resolution. Same as any Netflix entry, all episodes come out on the same day, for binge watching.

You can download everything Jamtara Season 2 episodes via the Netflix app on iOS, iPadOS, Android, Fire OS, and Windows 10/11.

After being shot from behind during Jamtaras season 1 finale, Sunny is now bound to a hospital bed. Played by Shrivastav (Collar Bomb), the ambitious boy still has no idea as he tries to lure school-aged kids into the new scam operation. As someone who has been proven to be afraid of altercations, he remains extremely cautious and even puts a gun under his pillow when Bhaan’s men come attacking him. Ironic, as he sees himself as this quintessential Bollywood hero, who can never be put down.

Panwar (Super 30) reprises her role as Gudiya and leads the charge against Bhaan’s election campaign. For her, this is a personal vendetta: shattering her dreams and falling victim to an attempted rape by the corrupt politician. Last time, Gudiya was trapped in a pickle, with a bag full of cash and grieving at the sign of an incapacitated Sunny. Jamtara season 2 seems to jump forward in time, forcing her to rebuild her reputation in the small town and take control.

Jamtara 2 to The Rings of Power, the 5 Biggest TV Series in September

For some undisclosed reason, politician Bhaan – played by Sial (Mirzapur) — has managed to break free from the clutches of the municipality and now represents itself in the elections. In addition to making false promises and paying citizens off, his campaign now includes vilifying Gudiya, who previously refused to sleep with him. He still holds a grudge against the young scammer couple and constantly watches Sunny’s movements, knowing that the boy always has a plan up his sleeve. “That man’s self-obsession and sociopathic attitude prove how boring he is,” Sial noted in an interview. “He has a lot of free time in his hands. Having nothing else to do, he chooses to get into the scam business on a whim.”

Seema Pahwa (Ramprasad Ki Tehrvi) is the latest entry from the Jamtara season 2 lineup. Her character Ganga Devi is a 50-year-old unmarried politician from Deoghar, who has just been released from prison for a mining scam. Seeing the dire state of her beloved city and Bhaan’s newfound power, she decides to team up with Gudiya and overthrow his position. Both Ganga and Brajesh have untamed ambitions and it is impossible for two such individuals to live together in the same city. TLDR: She serves as Bhaan’s ego check.

In the middle of the election drama, Rocky – played by Pushkar (Grahan) – takes a neutral position and acts as a bridge/messenger for both parties. As one who started the phishing business in Jamtara along with his cousin Sunny, he is teaming up again, placing orders for thousands of new SIM cards and distributing them to his scammers. “Sparsh and I are like brothers, both on and off screen. Off screen, there is also mutual admiration and respect. On the screen, it’s the exact opposite. Yes, we are brothers, but mutual respect and admiration can go to hell,” Pushkar said in an interview about his character’s chemistry.

Next up is Rinku Mondal, a 23-year-old young dreamy man, who once left the land of Jamtara. Played by Ravi Chahar, the pancake shop owner from Noida returns to his hometown, realizing that this is the best place for him to run scam operations, unlike the city. After all, a big fish in a small pond is better than a small fish in the sea. An expert at impersonating a woman – even down to the voice – the shrewd con man crosses paths with Bhaan, who orders him to kill. Despite being somewhat religious, his morality depends entirely on whether an evil deed serves as a necessary means of survival.

The cast concludes with Police Aksha Pardasany (Kathmandu Connection) as SP Dolly Sahu and Dibyendu Bhattacharya (Rocket Boys) as Inspector Biswa Paathak. Both officers are in serious trouble this time because they have previously carried out a rogue operation to track down Bhaan and overthrow his empire. Not to mention, Sahu was transferred to another jurisdiction.

Here’s the official synopsis for it Jamtara season 2 of Netflix:

Rocky, Sunny and Gudiya are back with India’s biggest scam. As phishing expands, bigger players and bigger scams find their way to Jamtara. With the upcoming elections, the stakes are raised and all hell breaks loose as politicians try to control phishing, but phishing ultimately controls local elections. Out for revenge, Gudiya takes on Brajesh in a David vs Goliath-esque feud. Who comes on top?

On August 24, Netflix released a teaser for: Jamtara season 2, to announce the release date announcement. The 30-second clip showed little detail and showed Shrivastav’s Sunny mimicking a fake voice in an attempt to defraud countless citizens ranging from teachers, politicians and school-aged children. Some emphasis was placed on the banyan tree, where several telephones hung from strings. Speaking to MoneyControl, director Padhi revealed that such trees really exist in Jamtara. “After a certain number of calls, people will tie up their mobiles so that the number cannot be found, because it can also be traced through the IMEI number in your phone,” he said.

The studio subsequently released a trailer for: Jamtara 2 on September 1, detailing the electoral process, celebrations and risks to our scam trio. Bhaan’s henchmen go a little too far and cause a firefight during Gudiya’s speech, culminating in a territorial war between parties. The Jamtara The Season 2 trailer also highlighted Devi’s preference for Gudiya’s campaign and gave her crucial life advice: “To ascend into politics, we must leave our loved ones behind.”

The first reviews for Jamtara Season 2 will air this Friday, September 23, the day it will be released worldwide on Netflix. The Gadgets 360 review of the series comes out on the same day.

Here’s the official poster for it Jamtara season 2 of Netflix: