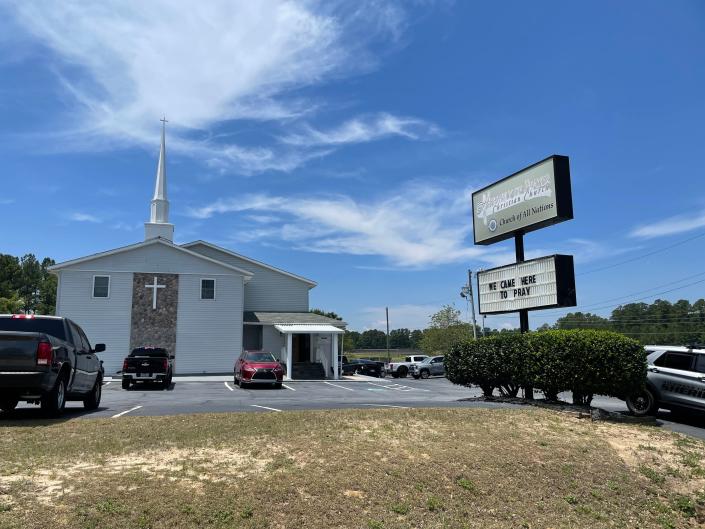 The FBI raided three churches associated with the House of Prayer Christian Church in Georgia and Texas on Thursday.

The FBI has not released a statement regarding the raids.

The House of Prayer is owned by the nonprofit foreign corporation House of Prayer Christian Churches of America Inc., which registered with the Georgia Secretary of State in 2004. Listed leaders of the company are affiliated with churches of Georgia and use the post office in Hinesville, Georgia. boxes as mailing addresses.

His churches, which are mostly located near military bases across the country, have been accused by former members and a veterans advocacy group of operating as a cult and targeting soldiers.

In August 2020, Veterans Education Success, a Washington D.C.-based advocacy organization, asked the U.S. Department of Veterans Affairs and the Georgia Veterans Service to investigate alleged abuses of the GI Bill program by Bible Seminaries in the House of Prayer Christian Church.

The veterans alleged that the House of Prayer Christian Church “misleads the VA during inspections and targets veterans in order to access GI Bill funding, VA disability compensation, and VA home loans” , according to the organization’s letter to the VA and Georgia SAA.

Half a dozen FBI agents were seen at the back of the Assembly of Prayer Church on Tobacco Road in Hephzibah during a raid which began around 7.15am on Thursday and continued into the after -midday.

According to a search of property records, House of Prayer Christian Churches owns 2952 Old Tobacco Road, the address of the Assembly of Prayer church in Richmond County.

Around 1 p.m., officers were seen using stairs at the rear of the building during the investigation, according to Sgt. William McCarty with the Richmond County Sheriff’s Office.

“We were there to help them, but referring everything to the FBI,” McCarty said. He said he could not confirm whether there had been any arrests.

The Assembly of Prayer Church in Hephzibah is located just outside Gate 5 in Fort Gordon.

In an email Thursday, Anne H. Bowman, deputy public affairs officer at Fort Gordon, said, “Fort Gordon was aware of the organization called Assembly of Prayer Church through our application channels of the law, but the facility had no prohibition against the organization or any other official dealings with them (despite claims on their websites).”

Bowman confirmed “there have been reports made to Fort Gordon law enforcement of attempted recruitment/solicitation by church members, but there have been no incidents, confrontations, arrests or anything of that nature,” she said in another email late Thursday.

The FBI also raided the House of Prayer Christian Church in Hinesville on Thursday. The raid took place just after 8 a.m. on the 2500 block of Airport Road.

Onlookers observed FBI agents with weapons going into several buildings while a group of women were guarded by an armed officer.

FBI spokeswoman Jenna Sellitto confirmed the agency was executing a court-authorized search warrant. She said no arrests were made Thursday afternoon.

The House of Prayer Christian Church in Hinesville is located less than eight miles from Fort Stewart in Liberty County.

The Assembly of Prayer Christian Church on Massey Street in Killeen, Texas, was also raided by the FBI on Thursday, according to the Killeen Police Department.

The church is located less than 4 miles from Fort Hood.

Ashley Demorest, a former church member who observed the raid, said she was a church member from age 15 to 23, “until I finally escaped”.

Amber Fitz-Randolph, leader of The Ft. Hood Fallen Facebook page, which launched in 2017, said members of the Killeen Church crept into the barracks and threatened soldiers.

In a text message Thursday afternoon, Christopher Haug, media relations chief at Fort Hood, said they knew the FBI was investigating the church and their police were investigating.

Demorest said she solicited soldiers on base as a member of the church.

“When I was 16, I would go with other members to [Fort Hood] and doing what the church would call ‘soul winning’ to invite people to church,” she said.

In the Veteran’s Education Success letter to the VA and Georgia SAA in 2020, the organization cited similar solicitations.

“Soul Winning is an organized event coordinated by HOPCC clergy,” the document notes. “Five days a week, individuals are paired up and sent out to recruit new members on or around military bases. … Students would recruit from exchange posts, barracks, and accommodations on base.”

The document also cites the experiences of recruiting specific members to bases in Georgia.