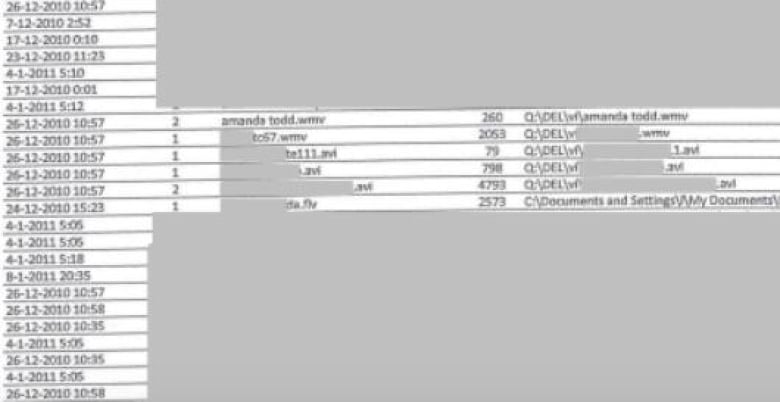 WARNING: This story contains disturbing details and may affect those who have been targeted for sextortion, or know someone who is a victim.

A Dutch National Police digital detective said he discovered files containing the words ‘Amanda Todd’ on a hard drive seized from the man on trial in the BC Supreme Court for sextorting the 15-year-old.

Testifying Tuesday, Det. Frank van der Molen said one of the files he found appeared to be attached to a 260-second video and another may have been connected to a Facebook profile.

The Dutch police officer’s testimony marks the first time in three weeks that the jury has heard evidence directly linking Amanda Todd’s name to digital devices seized from the bungalow where Coban was arrested in 2014.

Coban has pleaded not guilty to five counts, including harassment, child luring and possession of child pornography in what prosecutors allege was a scheme to extort sexual images from Amanda Todd.

Crown prosecutors say the 44-year-old used a series of fake social media accounts to pursue her target via the internet from 2009 to 2012, when she was between 12 and 15 years old.

Amanda Todd died by suicide in 2012. Coban is not charged in her death.

References only, not the videos themselves

Van der Molen said he and his colleagues on the child exploitation team examined the contents of the Coban devices in the months after they were seized from the bungalow where police mounted a covert operation that resulted in Coban’s arrest on January 13, 2014.

He said the files referring to Amanda Todd’s name were found on a hard drive, in a database file containing a list of 1,383 video files that had been played on an application that functioned as a media player. .

On cross-examination, van der Molen agreed that the list only contained the references, not the videos themselves.

The officer who was in charge of the team that placed hidden microphones, cameras and a keylogger to record computer activity in the residence in December 2013 spoke to van der Molen – continuing dramatic testimony which started on Monday afternoon.

Chief Inspector Joerie van Schijndel said he observed Coban two or three times on surveillance video and in person in the weeks between the covert operation and his arrest.

Dutch police used a nearby bungalow to keep tabs on their suspect, but van Schijndel said the exact location was confidential, as were many technical aspects of the surveillance.

In cross-examination, he told Coban’s attorney that they wanted to have the defendant while he was on his computer so they could access his devices when they were live online.

But he said Coban went to the bathroom first and appeared to spot the officers who entered the house silently, as he emerged from the bathroom holding an iron pipe.

Coban cut his eye on a heater during the arrest.

After the defendant was handcuffed, van Schijndel said police blindfolded Coban and covered his ears with headphones so he wouldn’t see officers removing their surveillance gear.

The inspector said another of the officers involved in the operation rushed into Coban’s room to keep his computer on so he wouldn’t fall asleep.

Prosecutors showed the jury photos of the covert operation and the search and seizure that followed Coban’s arrest.

The photographs include images of various devices including a laptop and computer monitor mounted on a bare mattress, a cable leading to a computer tower and a wire plugged into an antenna above a set of boxes .

The Crown said in its opening statement that police in the Netherlands were key to building a case related to the cyberbullying of Amanda Todd. Coban was extradited from the Netherlands to stand trial in British Columbia in 2020.

Outside court, Carol Todd – the mother of Amanda Todd – said that after three weeks of technical evidence on computers and digital forensics, she was delighted to see van der Molen present the jury with a direct link between her daughter and computers seized during Coban’s arrest.

“It was a sense of relief that there is now definitive concrete evidence that police have found that linked Amanda’s name to Mr. Coban’s hard drives,” she said.

“Hopefully there will be more to come.”

Carol Todd attended Coban’s trial each day, sitting in the back of the courtroom, a few feet from the prisoner’s box where the defendant sits with his back to her.

Todd has become an international voice against cyberbullying following the death of her daughter and the viral impact of a video Amanda Todd recorded before her death detailing her anguish.

Even as Coban’s trial unfolds in a British Columbia courtroom, the story of a Winnipeg teenager who took his own life after being sextorted has made national headlines.

According to his parents, Daniel Lints was a normal, happy 17-year-old until he accepted a message request from what appeared to be an attractive young woman on Snapchat last February.

She coerced him into sending an explicit image, and within minutes he was being blackmailed. He committed suicide a few hours later.

Carol Todd said she had been in contact with the Lints family.

“It’s heartbreaking to hear, especially when the young boy just came home and told his parents they just had a presentation on Amanda Todd’s story,” she said. .

“And this youngster may not have heard the message that if something happens you need to talk to someone else to help you.”

If you or someone you know is having trouble, here’s where to get help:

This guide from the Center for Addiction and Mental Health explains how to talk about suicide with someone you’re worried about.