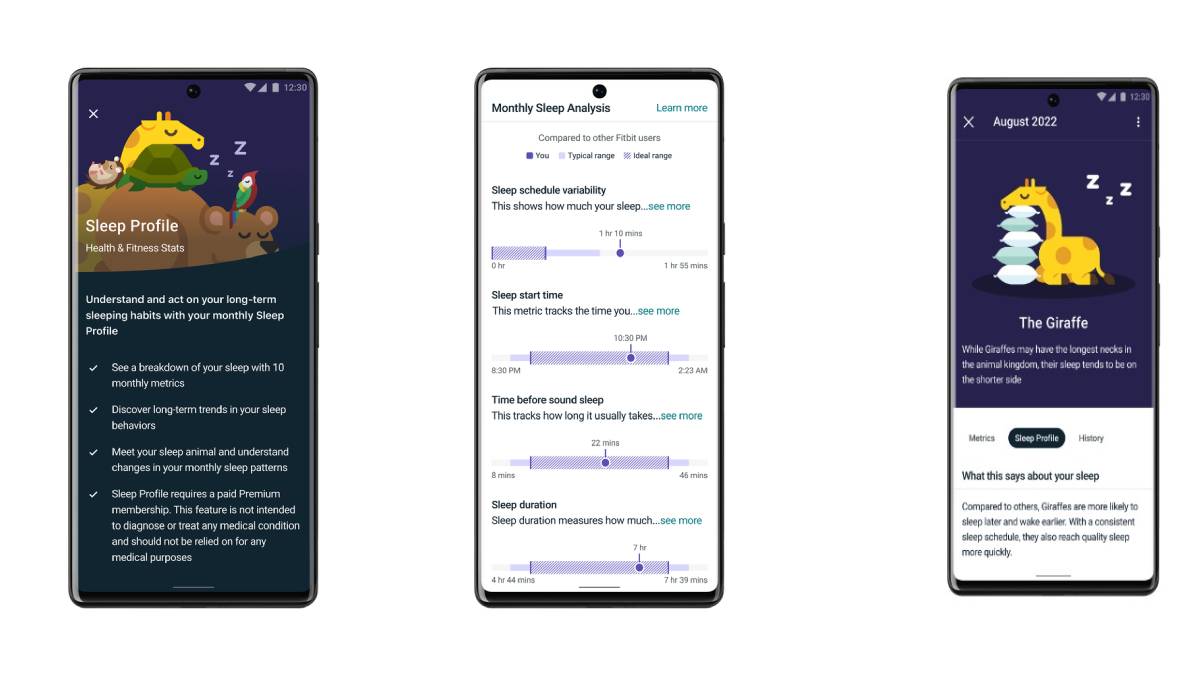 Fitbit is introducing the Sleep Profile feature, which will provide Fitbit users with even more insight into their sleep. This new Fitbit Premium feature offers a new longitudinal analysis of sleep patterns while interpreting it with fun animal characters. Sleep profile analyzes the Fitbit user’s sleep each month across 10 key metrics, which are backed by sleep science, calculates trends, and compares them to what’s typical for their age and gender to help them to find out where they can improve.

Google-owned Fitbit announced the “sleep profiles” in a blog post. This new feature allows their Premium members to have more information about their sleep habits using their associated sleep animal. It also helps Fitbit users discover long-term trends in their habits so they can try to improve their sleeping habits.

Fitbit says sleep profile metrics are being shown on a monthly aggregate view for the first time, and users will also be provided with ideal ranges for each metric. They will also receive a monthly sleep analysis – so they can assess their actual concentration and efforts to improve.

Fitbit’s sleep profile feature uses six animal archetypes, including giraffe, bear, dolphin, hedgehog, parrot, and turtle, each chosen for their different tendencies related to common sleep habits of users. depending on the company.

Meanwhile, Fitbit explains, “Our research team studied 1,000 different sleep characteristics during their analysis before distilling them down to the key metrics we include in your profile. Ranging from new metrics, including variability from sleep schedules, time to healthy sleep and disturbed sleep, to previously tracked metrics such as sleep duration, rest and REM sleep, these data points paint a holistic month-long view of your habits and the quality of your sleep.

Fitbit users, on the other hand, were asked to wear a Fitbit smartwatch or tracker while sleeping for at least 14 nights a month, to receive the analysis. Results will be displayed in the Fitbit app on the first day of each month and may change from month to month.

In terms of availability, the latest Sleep Profile feature will launch for Premium customers and is compatible with Fitbit Sense, Fitbit Versa 2, Fitbit Versa 3, Fitbit Charge 5, Fitbit Luxe and Fitbit Inspire 2 devices. Eligible Fitbit users will receive their first profile in the first week of July, according to the company.