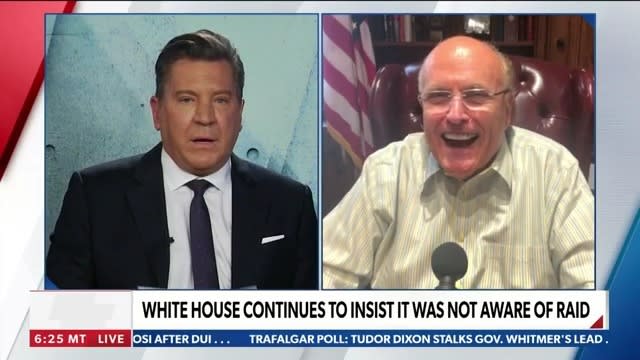 The pair, not unlike Donald Trump, Jr., began by mocking the size of the newsrooms. Without skipping a beat, Bolling went on to name Hillary Clinton, claiming that her handling of emails on a private server “looks like more spy crimes than anything Trump has done.”

Giuliani responded by trying to cover up any alleged wrongdoing by the former president regarding classified material.

“All Trump actually did is put it in a place they approved,” he claimed.

Bolling then moved the discussion to President Joe Biden, saying earlier this week that he had no prior knowledge of the classified document raid on Trump’s Florida estate, which is known for failing to take adequate security measures. “Do you believe him?” asked Bolling.

“Of course I don’t believe him!” exclaimed the former New York mayor whose law license was suspended for spreading lies about the 2020 election. “Or, he forgot, you know? He may have forgotten,” he added, implicitly denigrating the president’s health, as have prominent right-wing television hosts.

See also  DeSantis' migrant stunt was disgusting. But was it against the law?

“It’s impossible that they definitely didn’t tell Biden or anyone before Biden,” Giuliani added, a handy excuse for the Newsmax host to bring up not only Hillary Clinton but also former President Barack Obama during a discussion. on the FBI’s investigation into Trump.

“Oh, so maybe they called Obama,” Bolling blurted out. “Maybe they told Obama to tell Biden.”

“Yes, tell Obama, Mrs. Biden, the chief of staff,” Giuliani replied. “Whoever it is helping to feed him at night or whatever.”

Read more at The Daily Beast.

Get Daily Beast’s biggest scoops and scandals straight to your inbox. Sign up now.