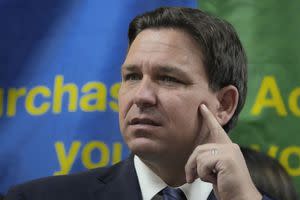 Governor Ron DeSantis issued an executive order Thursday targeting governments in China, Iran, Russia, Cuba and “others hostile to U.S. interests” while citing concerns about issues such as cybersecurity.

DeSantis, who is up for re-election in November, said he will also ask lawmakers in 2023 to make changes to state law that would further block those governments’ business activities in Florida.

“I think we’ve strongly resisted this kind of ideology in several ways, and this just puts us on that course,” DeSantis said at an event at Miami Dade College’s Wolfson Campus that focused heavily on China.

The executive order partially prohibits state and local governments from purchasing or using technology services that a federal agency has banned based on national security concerns.

The order also directs the State Department of Management Services to take steps to ensure that goods and services used by state and local governments are not subject to exploitation by “foreign countries of concern.”

“This will prevent Florida Floridians’ personal information and technology systems from being exposed to foreign entities and bad actors,” DeSantis said.

DeSantis also wants to extend a 2021 law that created new reporting requirements for entities seeking grants or contracts from the state.

The law requires government agencies and universities to report receiving gifts or grants “from a foreign source” valued at $50,000 or more. DeSantis plans to review the law to ban gifts to Florida colleges and universities from residents, governments, or other entities in countries of concern.

Lawmakers approved changes in 2021 following high-profile Florida cases involving medical and academic researchers. Among the other changes is that people who “trade in trade secrets” will be charged in the second degree with “trade secrets”, the charges being elevated to first-degree offenses if foreign governments benefited from them.

Lawmakers also demanded that people and entities seeking state grants or contracts in excess of $100,000 disclose contracts, donations or grants linking them to China, Russia, Iran, North Korea, Cuba, Venezuela and Syria. State universities and other entities with research budgets of $10 million or more were instructed to establish programs for international travel approval and control.