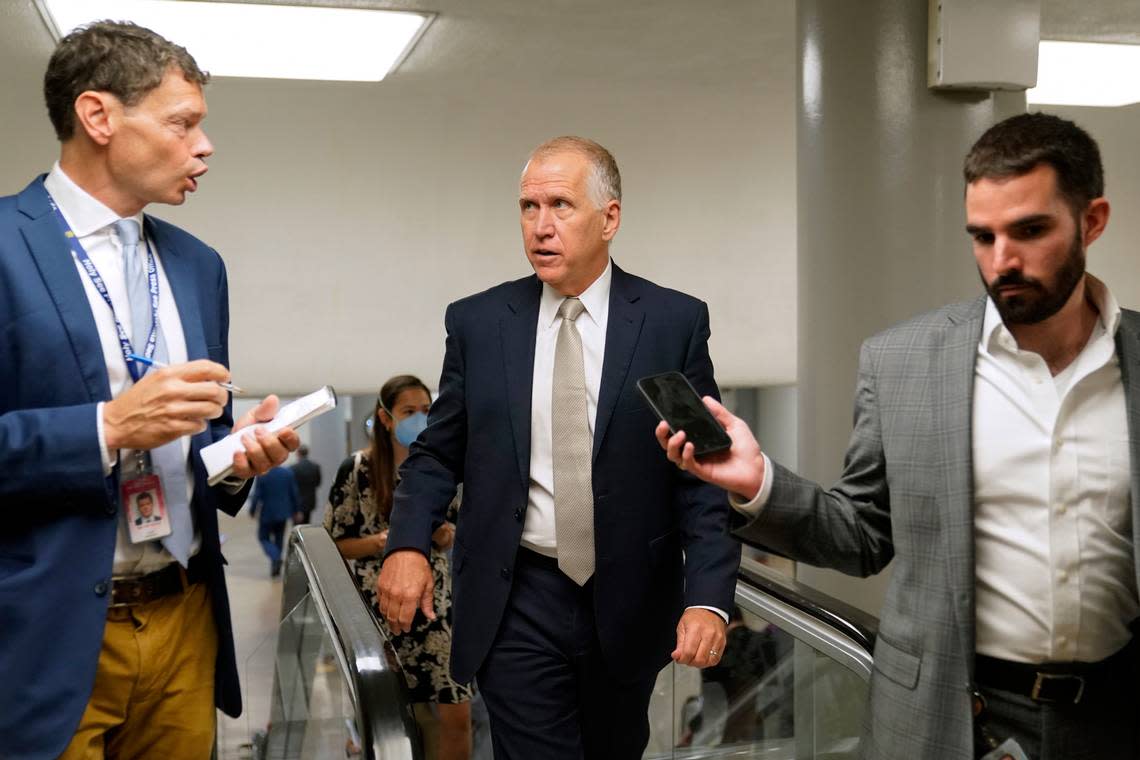 Additional protection for victims of domestic violence is included in the bipartisan Safer Communities Act, which passed the Senate Thursday night.

The bill would end what is called the “boyfriend loophole,” which refers to a loophole over who can buy a gun with a history of domestic violence. The boyfriend loophole has been the subject of debate among lawmakers who have tried for years to close the loophole.

Currently, federal law prohibits the sale of firearms to persons convicted of domestic violence or who have been the subject of a restraining order. However, the law only applies to people who are married to, living with, or having had a child with the victim.

Closing the boyfriend loophole would include people who are in a serious “romantic relationship” with a victim and have a misdemeanor domestic violence charge.

However, there are certain conditions.

The legislation has no clear definition of what a “romantic relationship” is and leaves it to the courts to make the decision by examining the nature of the relationship, the duration and “the frequency and type of interaction between the people involved”.

Additionally, the ban on purchasing guns for abusers only lasts for five years, and they can get their gun rights back if they don’t re-offend within that time.

Domestic violence advocates in the Triangle who hoped for more protections for victims had mixed reactions to the new bill.

At the North Carolina Coalition Against Domestic Violence, advocates monitored the 63 cases of fatal domestic violence in the state in 2021. Many of those cases involved firearms, said Kathleen Lockwood, the organization’s policy director.

“Even though we don’t talk about what our courts are doing in North Carolina, what happens outside of our state still impacts residents,” Lockwood said. “We are grateful to see the attention paid to the presence of a firearm.”

She said the organization is excited about the potential of the federal law closing the boyfriend loophole, but “unfortunately, the situation in North Carolina is a little complicated.”

The loophole applies to federal law’s ability to restrict access to firearms if convicted of a domestic violence misdemeanor, but in North Carolina, the most common misdemeanors charged in domestic situations are assault or common assault.

Because a 2015 Supreme Court decision in United States v. Vinson, these crimes do not meet the requirement of a domestic violence misdemeanor.

“The impact in North Carolina will unfortunately not be significant,” Lockwood said. “But for the most part, at the Coalition, we still celebrate this legislation because we know so clearly how the presence of a gun in a home can really increase the lethality of situations.”

The organization, based in Durham, has served victims of domestic violence in the region for over 30 years.

An opportunity for more

In Johnston County, Kay Johnson wants counseling needed in domestic violence cases. Preventing people from getting a gun for five years may not be enough, she said.

Some lawmakers have called the five-year limit a chance for people to recover.

“If this happened once and a weapon was used, then more than likely if there are no parameters in place, then that individual may display this behavior again with another partner” , Johnson said.

As executive director of Harbor of Johnston County, a nonprofit for victims of domestic violence and sexual assault, Johnson wants to ensure victims receive trauma counseling, but the organization itself even does not work with abusers.

“We know that domestic violence, violence in intimate relationships, is about power and control,” Johnson said. “If someone presents this in relation to another individual, we often find that it didn’t start with them. There is a childhood trauma here. By imposing some type of therapy, I hope they address this trauma that usually precipitates this type of violence.

Over the past six months, Harbor has seen an almost 25% increase in the number of domestic violence victims seeking help with protective orders, legal representation, child custody and therapy, said Johnson.

U.S. Senator Thom Tillis, the North Carolina lawmaker who joined eight other Republicans and 10 Democrats in advancing the legislation, told the N&O that the bill includes an important component for behavioral health. There will be investments to increase access to mental health care and suicide prevention programs as well as crisis and trauma intervention.

“I’m glad (the loophole) is being discussed because of the prevalence and insidious nature of violence against women that is embedded in our culture and society,” said Brace Boone, executive director of the Women’s Center of Raleigh.

The organization serves as the frontline for victims of domestic violence and their families, he said.

“We always want to put forward in the public arena discussions of the prevalence of … violence against women right up to exploitation and trafficking,” Boone said. He said there are usually benefits to the cause “every time political leaders talk about domestic violence.”

Thor Love and Thunder will include Shamshera, Brahmastra trailers, Avatar The Way of Water teaser