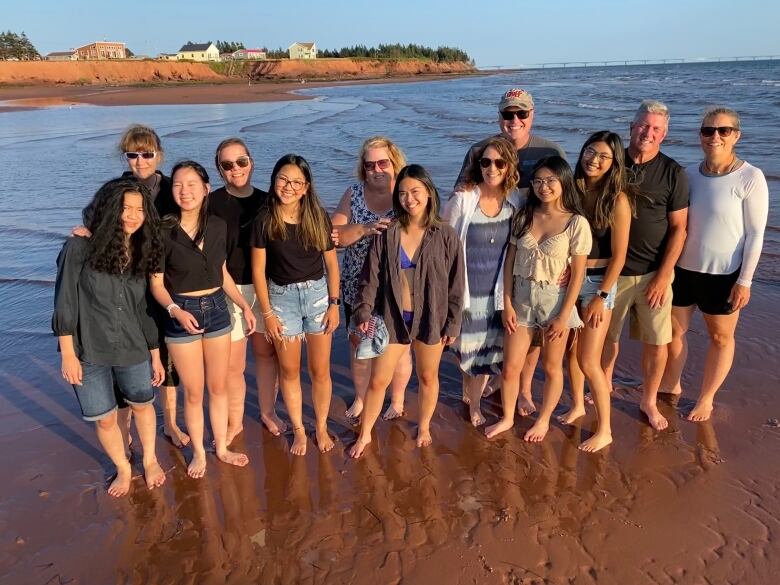 The sand between your toes, the chilling crackle of gentle waves crashing through your legs—these are familiar feelings to many visitors to Prince Edward Island.

But for one big chosen family, these visits and feelings have become a cherished 15-year tradition that keeps them together.

“The sand and the water – I love the sound of the waves. You can even hear it at night when we go to sleep,” says Olivia McKenzie, one of the many adopted girls around the age of 15 who help with the making the family.

Most of them live in Nova Scotia. Every summer they make the trip to PEI to spend time together and reflect on the long journey that took them from China to this point.

The daughters of these families call themselves ‘the sisterhood’, although they are not related to each other.

The PEI meetings not only attract the core group of five, when other commitments don’t get in the way, but also close friends from British Columbia.

Charlotte, Ava, Sadie, Emily and Olivia were all placed for adoption at the Guiping Social Welfare Institute in Guiping, southern China.

“The sisterhood among us, versus others, is that we don’t live together, but we have the same connection and relationship that you would have with your other siblings,” Ava Andrecyk told TSWT News.

All the parents met in 2004 through the same adoption agency in Halifax. They attended meetings together to learn how the adoption process would go.

Outside the meetings, the parents’ relationships blossomed.

You can tell it still makes me very emotional because it was life changing for all of us to finally be together.— Leanne Andrecyk

“That’s where we got to know each other a bit,” said Maria Carty. “We went on a camping trip together that summer and cemented our friendship and the idea that we wanted to stay connected.”

It would be two years before they would meet their daughters in China, and that time of bonding transformed them from friends to family.

“Over that two-year period, we became the best of friends. Especially our chosen family,” says Leanne Andrecyk, one of the mothers.

In 2006, the parents traveled to the Lottery Hotel in Nanning – a town just over 200 kilometers west of Guiping – and finally saw their new daughters.

“It was a bit of a crazy scene to see all these adults eagerly waiting for their kids,” Carty said. “It’s a special moment.”

In that room, seeing all the tears as her friends hugged their 11-month-old daughters, Andrecyk knew they couldn’t break up the girls once they all got back to Canada.

“It still makes me very emotional because it was life-changing for all of us to finally be together. It just took us a long time to find each other, and here we are,” she said. “It was important to us to keep them together and lo and behold, the parents developed a friendship that went way beyond just being friends.”

And so they started their tradition. In 2008, they would go to Prince Edward Island, to Carty’s husband’s family home, on a special retreat.

‘They are there for you’

As they walk along Chelton Beach, a scenic 15-minute drive northwest of the Confederation Bridge, the sisters laugh as she and the families try to get a photo of jumping on the beach just right.

It’s harder than it looks, but that’s the vibe when they’re together.

“If we were going all year round, summer was where everyone could get together and just go wild,” Ava said.

Not every family makes it every year — Charlotte had a commitment this summer — but everyone is doing their best to make it to the island. Sometimes they are joined by other British Columbia families they met during the adoption process. This year, two other daughters, Caity and Lily, made the trip from BC to PEI

They are proud and happy that they have been able to stay so close after so many years.

“There are many groups that have adopted, but ours has remained very close and more of a close family,” Olivia said. “We all do the same things regular sisters do. We share clothes and makeup, and we’re constantly chatting online or on the phone, [as well as] to see everyone in person.”

“They’re people you can turn to for anything, and while we don’t like living together, they’re just like any other siblings and stuff — because you can go to them for the same advice and support,” Ava said.

“On your down days, your up days, they are there for you.”

‘I just don’t see us losing that bond’

Inside the cottage are many mementos that trace the story of the sisterhood: framed photos of the children in Anne of Green Gables’ iconic pigtails; a large vase of collected sea glass, filled to the brim; a passage by Jose Chaves pinned next to photos of the daughters when they were no bigger than a fence post.

It says, “For her, the ocean was more than a dream, it was a place she needed to find herself.”

The cottage is not just a getaway. When they are together, it is a home.

“Whatever their family becomes when they grow up, maybe they’ll bring their family here to enjoy it long after we’re gone,” Andrecyk said.

“As we get older and go to school and start getting married, and maybe all those milestones, [will] are we still in touch? I think we definitely will,” said Olivia.

“We made just so many memories when we were younger, I just can’t see us losing that bond.”