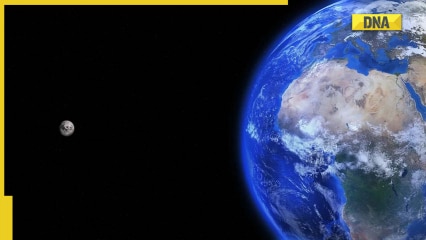 Understanding how stars and other celestial bodies formed in the universe is a very complex task and requires a lot of research. When we come to the question of how the Earth formed, we have answers based on centuries of scientific studies and observations from space. Science has tried to solve this mystery to some extent.

So here we try to delve deeper into the question of how the Earth was formed and what processes and factors contributed to its formation. Let us know what the science says about it?

Scientists believe that Earth, like the other inner planets, came to its current state in three different stages.

1. The first stage is known as accretion, or the formation of a planet from existing particles in the solar system when they collided with each other to form larger and larger bodies.

2. The next step involved the collision of a protoplanet with a very young planet Earth. It is thought to have happened over 4.5 billion years ago and may have resulted in the formation of Earth’s moon.

3. The last stage of development saw the bombardment of the planet with asteroids.

Scientists suggest that Earth’s early atmosphere was most likely composed of hydrogen and helium. As the planet changed and the crust began to form, volcanic eruptions occurred frequently. These volcanoes pumped water vapor, ammonia and carbon dioxide into the atmosphere around the Earth.

Because of this, the oceans slowly began to take shape and eventually primitive life evolved near these oceans.

Billions of years ago, a cloud of gas and dust moved through a corner of the Milky Way. It also contained the remains of an old star that had a supernova explosion a long time ago. The gas and dust particles were floating but they were initially very far away.

But then a supernova explosion also occurred in a nearby star, due to which the shock waves of light and energy spread all around space, due to which the particles of gas and dust from this cloud came closer together.

Soon the cloud of gas and dust turned into a giant ball and under the effect of gravity it got bigger. The gas and dust particles interacted and a powerful nuclear reaction took place inside the ball, and the cloud ball turned into a sun-like star. While a lot of dust and gas began to revolve around the sun, which is called the protoplanetary disk.

On the other hand, the planets Mercury, Venus, Mars, Jupiter, Saturn, Uranus and Neptune and their moons were also formed from other parts. All the baby planets also rotated and attracted the matter around them towards them and increased in size. Many stones collided with our Earth and fell inside. In the process, this substance heated up and became a giant ball of molten rock.

formation of the moon

Meanwhile, another big incident happened. The Earth collided with another huge body, thanks to which the Earth became even larger, but a piece of it also began to float in deep space, which later became the only natural satellite of our planet, the moon.

Some scientists also oppose this concept, but this belief is the strongest right now. At that time, there were many volcanoes on Earth.

Slowly the Earth began to cool, but it took a long time. During this time, many ice rocks and gases arrived on Earth, and due to the melting of the ice, seas and oceans began to form here. The Earth’s cooling process continued for a long time and the upper layer of the Earth cooled and solidified while the molten rocks in the depths remained hot.

After that, favorable conditions for life were created on Earth. Animals and other organisms evolved from the atmosphere, ocean, trees and land plants. During this time, there have been events of great destruction and extreme seasonal changes on Earth, which have led to the arrival of many new species.

Meanwhile, the dinosaurs came and died. After that, man developed on Earth only a few million years ago.

(With contributions from NASA and the scientific journal)