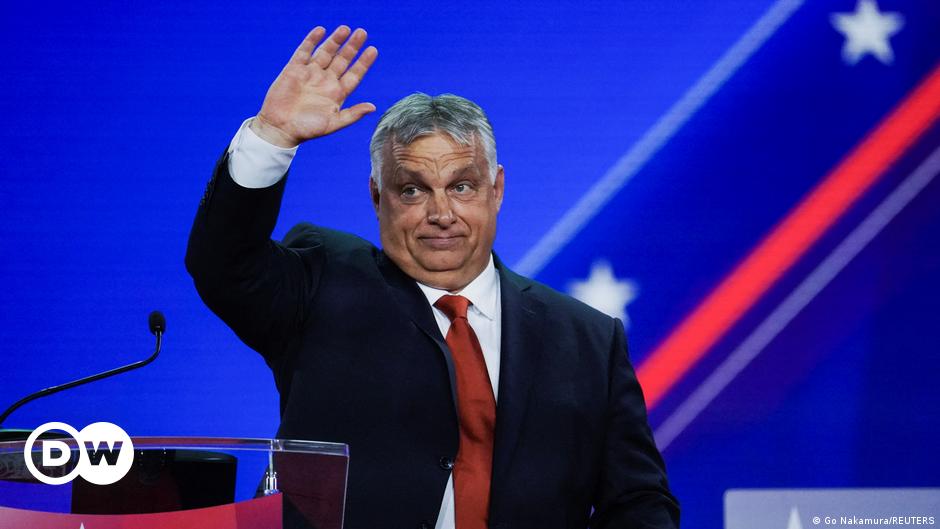 Speaking at a conservative convention in the US on Thursday, Hungarian Prime Minister Viktor Orban urged the public to “take back the institutions” of the “globalist ruling class”.

Orban spoke at the Conservative Political Action Conference (CPAC) in Texas, an annual gathering of conservative activists from across the United States.

Former US President Donald Trump, who has publicly praised the Hungarian prime minister, is also expected to speak at the conference. Orban met with Trump in Florida earlier this week.

“Few people know so much about what’s going on in the world today,” Trump said of his meeting with Orban.

What did Orban say?

The right-wing Hungarian leader, who has been criticized for undermining democratic institutions in his own country, received a standing ovation from those in attendance at the CPAC.

“We’ve seen what kind of future the globalist ruling class has to offer, but we have a different future in mind,” Orban said, adding, “The globalists can all go to hell.”

The prime minister also urged US conservatives to adhere to tough stances on LGBTQ rights and immigration — and called for the global right to work together.

“We have to take back the institutions in Washington and in Brussels. We have to find friends and allies in each other. We have to coordinate the movement of our troops because we face the same challenge.”

See also  Cindy Crawford, 56, shares bikini photo where she looks just like she did in the 90s

During his speech, Orban urged conservatives to uphold Western and Christian values.

“If you separate Western civilization from its Judeo-Christian heritage, the worst things in history happen,” he told the audience.

“The horrors of Nazism and Communism have happened because some Western states in continental Europe have given up on their Christian values,” Orban argued.

In late July, Orban sparked outrage when he warned that Europe would become a “mixed-race” society.

“We don’t want to become a mixed race people,” Orban said during a speech in Romania’s Transylvania region, which is home to a large Hungarian population.

Hegedus later withdrew her resignation after Orban insisted he adopt a “cultural, civilized attitude” and not a racist one.

Speaking in Texas, Orban said he described those who call his government racist “idiots.”

Hungary’s ruling far-right populist Fidesz party has been accused of undermining democracy and the rule of law. Last month, a rule of law report recommended cutting all EU funding to Hungary over “systemic” violations.