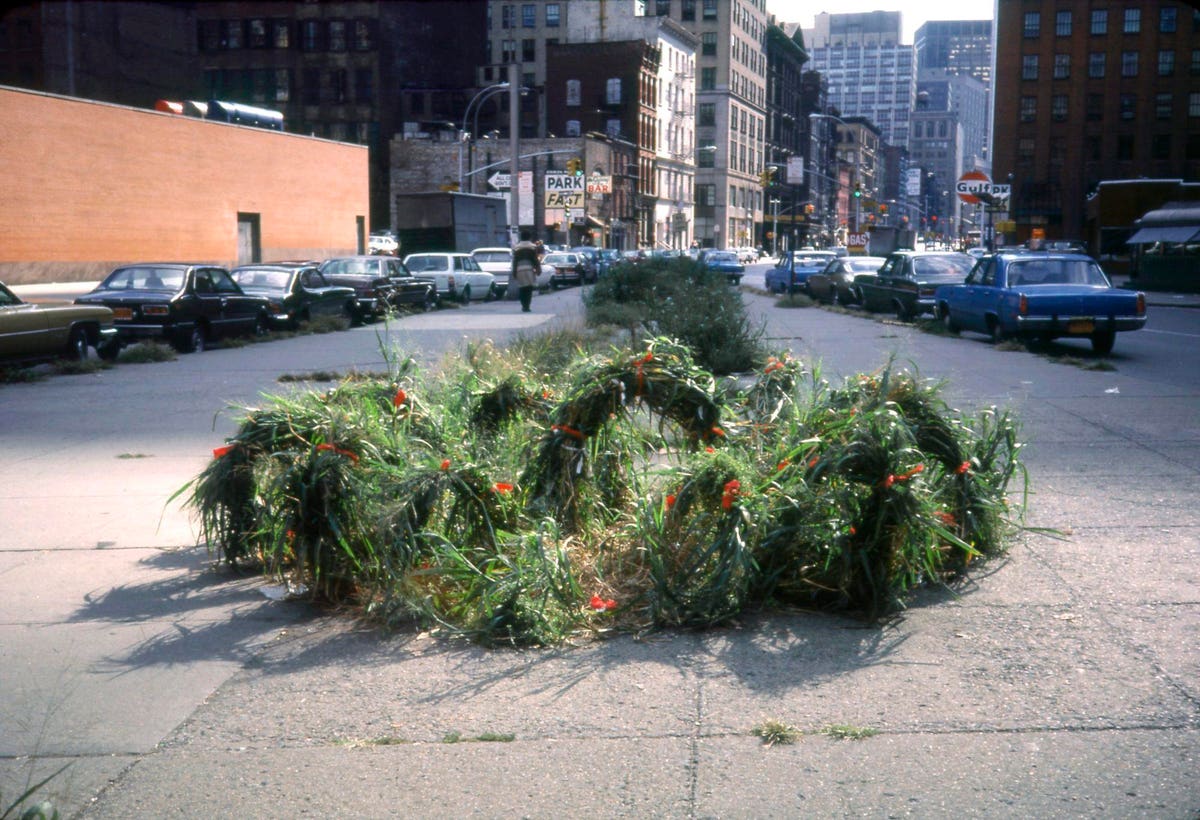 In the Brooklyn neighborhood, nestled between a Jewish school and a kosher restaurant, is a plot of land measuring seventy-one feet long and six inches wide. The lot was purchased at a municipal auction by a property developer in 1954. Not much has happened since. The only development was the placement of a wooden plank in the ground, creating a fence as narrow as the property and as exaggerated as the span of property rights in New York.

The fence was recently removed by artist Niloufar Emamifar, opening up the plot to rodents and other small animals. This modest act of resistance, which is commemorated by the board’s exhibition at MoMA PS1, is a fitting entry point into a thought-provoking new group exhibition called Life between buildings.

Artists have recognized the vitality of interstitial spaces in New York for at least half a century. One of the first to explore this field in conceptual terms, Gordon Matta-Clark began designing “hit-and-run gardens” in 1971. The idea was as simple as the scheme was drawn up: Thanks to his background in architecture , Matta-Clark made designs of fanciful topiary frames that could be set up in vacant lots in the middle of the night, illicitly sprucing up neglected private property for public enjoyment.

Matta-Clark also participated in municipal auctions similar to the Brooklyn sale, buying more than a dozen odd-numbered lots in the early 1970s, all left over from imperfect property subdivisions and surveying errors. He called them Fake domainsand presents them as a conceptual counterpoint to the grandiose land art of the 1960s. avalanche Magazine in 1974. “Property is so ubiquitous. The notion of ownership of each is determined by the utilization factor.

As radical as Matta-Clark was in his time, revealing how the urban landscape was marred by property laws and the pursuit of profit from real estate, his perspective was blatantly anthropocentric. Other artists exhibited in Life between buildings reveal that the scourge he denigrated has integrity in itself.

One of the first to challenge mainstream views was Becky Howland, who moved her studio to Tribeca in 1977. By most accounts, the neighborhood was a wasteland. The buildings were unoccupied. Vegetation has grown on traffic islands. One day, Howland tied down a patch of wild grass, creating a makeshift topiary. With this improvised act of gardening – only subsequently paired with Matta-Clark’s whirlwind landscaping – the grass was clumsily designed to conform to human standards of beauty, playfully suggesting that even weeds are worthy. of admiration.

Several years later, Cecilia Vicuña engaged the interstitial deserts of Tribeca more deeply with a series of site-specific performance installations, documentation of which can be seen at PS1. With chalk or string, Vicuña drew attention to the weeds she saw crossing the sidewalk. She dubbed these microhabitats sidewalk forestsand described them as “air vents for the earth”.

This was not a reference to ecosystem services before the letter. Vicuña was not suggesting that weeds be evaluated simply for their ability to absorb toxic emissions. Instead, she proposed that they were nothing less than the connective tissue between the natural and built environment. Thanks to these plants, the Earth breathed under the weight of the city – and breathed life into the people above.

Symbiotic reciprocity between humans and other species was understood by ecologists in the 1980s, but far from general knowledge as it has become subsequently. Vicuña’s work poetically evoked this relationship, while foreshadowing ideas that environmentalists are only now articulating: cities are teeming with biodiversity. Urban biomes often support many more species than surrounding areas, including suburbs and farmland. The layers of infrastructure constitute a kind of artificial geodiversity. The sheer complexity of the built environment provides countless accidental habitats. Every sidewalk is a forest.

Ecologists also attribute urban biodiversity to a second phenomenon, which will resonate with anyone who has ever encountered a pollination pathway. Cities are very connected. Many corridors are relatively uncrowded because they are accidental.

Unnecessary by the standards of real estate moguls, the Fake domains bought by Matta-Clark and the seventy-one feet of Brooklyn vacated by Emamifar prove to have a value that cannot be monetized. Life between buildings is a tribute to acres of difference between price and value.