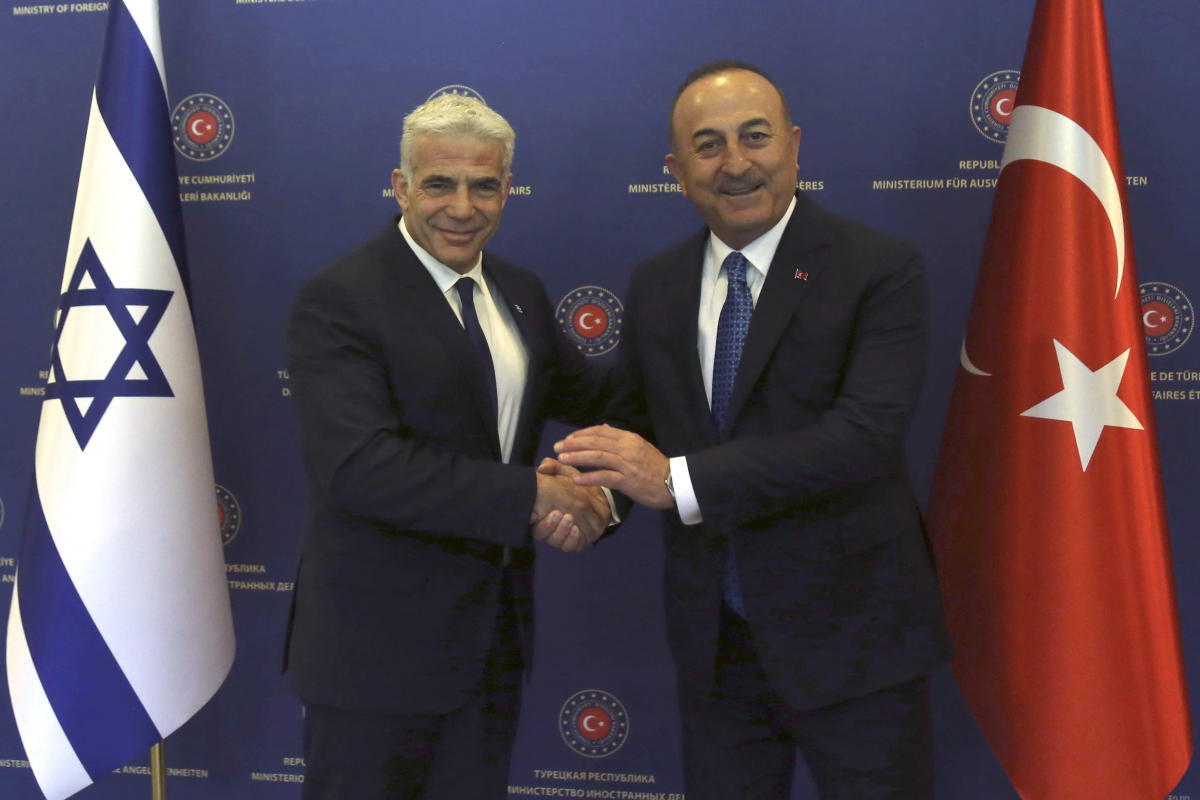 ANKARA, Turkey (TSWT) — Israeli Foreign Minister Yair Lapid on Thursday thanked Turkish authorities for their cooperation in allegedly thwarting attacks on Israeli citizens in Turkey, and warned that Israel would not “remain the arms crossed” in the face of Iranian threats against its citizens. .

Lapid made the comments after a meeting with his Turkish counterpart, Mevlut Cavusoglu, as the two countries continue their efforts to mend ties that have been strained by Turkey’s strong support for the Palestinians.

Earlier this month, Israel issued a warning to its citizens to avoid traveling to Turkey and urged Israelis in Turkey to leave immediately. The warning said that Israeli citizens could be the target of Iranian attacks.

“In recent weeks, the lives of Israeli citizens have been saved thanks to the security and diplomatic cooperation between Israel and (Turkey),” Lapid said. “We are very grateful to the Turkish government for this professional and coordinated activity.”

Lapid continued, “For its part, Israel will not sit idly by when there are attempts to harm its citizens in Israel and around the world. Our immediate goal is to bring a calm that will allow us to change the travel warning to (Turkey). »

The travel warning has angered Turkey, whose economy is largely dependent on tourism. Ankara responded by issuing a statement saying Turkey was a safe country.

Standing next to Lapid, Cavusoglu said Turkey “cannot allow these kinds of incidents to happen in our country.”

“We delivered the necessary messages,” he said, without giving further details.

The Hurriyet newspaper reported on Thursday that Turkish authorities on Wednesday arrested five Iranian nationals suspected of involvement in an alleged plot to assassinate Israeli citizens in Istanbul. Police seized two pistols and two silencers during searches of homes and hotels where the suspects were staying, according to the report.

Lapid’s visit comes amid political turmoil in Israel, where Bennett’s fragile, year-old government decided this week to dissolve parliament, triggering new elections expected to be held in the fall. Under the deal that forged Bennett’s coalition government, Lapid is expected to become caretaker prime minister in the coming days until a new government is formed after the election.

The developments deepen a political crisis in Israel, which has held four elections since 2019, each largely a referendum on former Prime Minister Benjamin Netanyahu’s rule. Netanyahu hopes to return to power in the next vote, but polls show that, as in previous rounds, he is unlikely to produce a clear winner.

Turkey, plagued by economic difficulties, is trying to break its international isolation by normalizing relations with several countries in the Middle East, including Egypt, the United Arab Emirates and Saudi Arabia.

Turkey and Israel were once close allies, but relations have become strained under Erdogan, who is a vocal critic of Israel’s policy towards the Palestinians. Turkey’s membership of the Islamic militant group Hamas has angered Israel.

See also  As the FDA considers vaccines for very young children, a senior official says the group must be protected from Covid.

The countries withdrew their ambassadors in 2010 after Israeli forces stormed a humanitarian flotilla bound for Gaza, which has been under an Israeli-Egyptian blockade since Hamas took power in 2007.

Nine Turkish militants were killed. Israel has apologized to Turkey for the deaths as part of a US-brokered deal, but reconciliation efforts have stalled.

Turkey recalled its ambassador in 2018 after the United States recognized Jerusalem as Israel’s capital, prompting Israel to respond accordingly. The two countries have not renewed their ambassadors.

The two ministers said on Thursday they had agreed to hold talks on the reappointment of ambassadors.

The latest rapprochement was spearheaded by mostly ceremonial Israeli President Isaac Herzog, who had several phone calls with Turkish President Recep Tayyip Erdogan and visited Turkey in March, becoming the first Israeli leader to do so. in 14 years. Cavusoglu visited Israel last month. It was the first official visit to Israel by a Turkish official in 15 years.

Tia Goldenberg in Tel Aviv, Israel, contributed to this report.