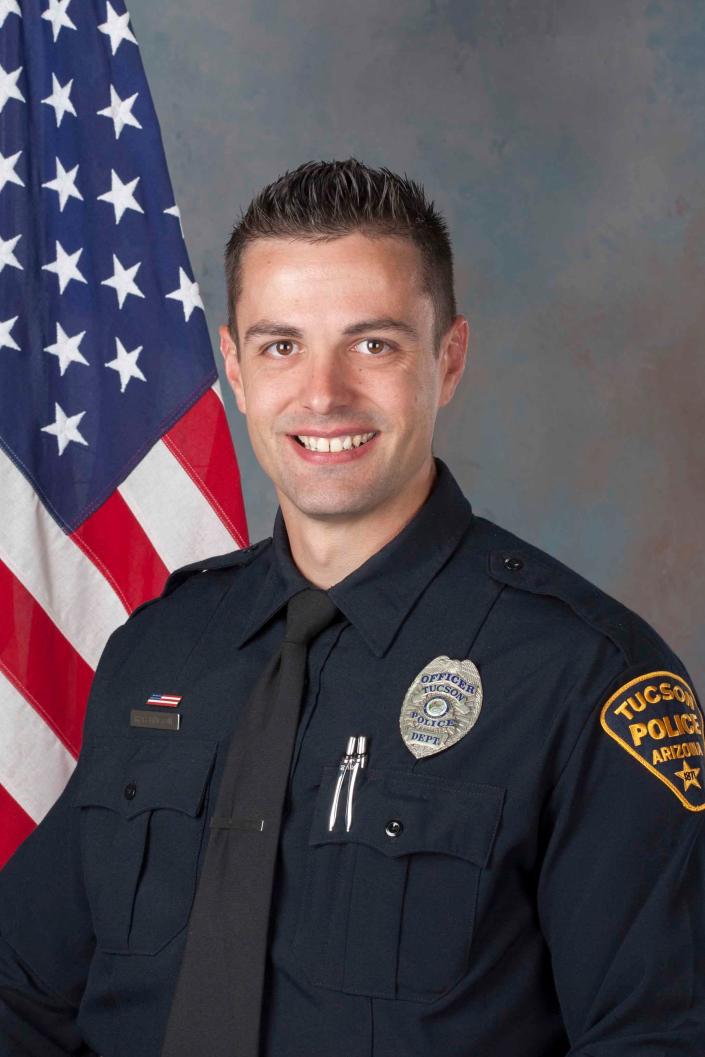 A wrongful death and civil rights lawsuit has been filed against Tucson and a former police officer charged with shooting a man in a wheelchair as he walked away from the police with his back to them.

Former officer Ryan Remington was officially discharged on Jan. 5 by the Tucson Police Department following the completion of an internal department investigation into the Nov. 29 shooting of 61-year-old Richard Lee Richards.

Remington fired nine times at Richards outside the entrance of a Lowe’s store near Valencia Road and Oak Tree Drive in south Tucson. Richards was suspected of shoplifting at a nearby Walmart. The firing came a day short before the officer had served five years with the division.

Filed Monday in federal court on behalf of Richards’ estate, the lawsuit’s claim alleges that Remington never warned Richards that he would shoot him, did not carry his pepper spray as required and issued by the city, and never signed the anesthetic pistol that he wore.

“That Remington fired the first eight shots into Richards’ back as he sat there, locked in his wheelchair, was unscrupulous and disturbing. But the pause after the eighth shot, followed by the ninth shot, is a testament to Remington’s depraved state of mind and should shock the consciences of all people,” the lawsuit reads.

Richards’ estate is represented by Strang Bradley, a law firm based in Madison, Wisc.

Remington’s attorney, Michael Story, did not respond to a request for comment.

“People may be offended by the number of times he’s fired,” Storie said at a Dec. 1 news conference about the shooting, shortly after adding, “Police cases are messy sometimes.”

The suit describes Richards being shot and his body falling from his wheelchair onto the pavement, with Remington spending 20 seconds trying to handcuff him instead of trying to save him from death.

“To be very clear, I am deeply disturbed and disturbed by Agent Remington’s actions. His use of deadly force in this incident is a clear violation of department policy and directly contradicts multiple aspects of our use of force and training,” Magnus said.

A grand jury on Aug. 24 has charged Remington with manslaughter, according to Pima County Attorney General CT Revere.

The lawsuit alleges that the Tucson has not trained officers in interactions with wheelchair users, adopted policies to protect them, and implemented no self-evaluation plan under the ADA. The lawsuit continues with allegations that the city discriminated against or failed to accommodate Richards.

Richards relied on a wheelchair because he was handicapped by a broken hip and could not take care of himself, according to the suit.

“One of the most shocking aspects of the video is that Mr. Remington shot and killed Mr. Richards while he was in a wheelchair. Mr. Richards, as a disabled man, has the same rights as all other Americans. He was not under the law. John Bradley, the attorney for a plaintiff in the case, said in an email.

While the trial-by-jury case does not require a specific dollar amount for its claims, it does demand punitive damages.

An employee of a Walmart on S. Midvale Park Road near Valencia Road suspected Richards was stealing a toolbox the night he was murdered. The employee claimed he asked to see a receipt and Richards instead pulled out a knife and said, “Here’s your receipt.” Remington, who worked off-duty at Walmart, responded.

Footage from security cameras shows Remington and Richards, in his motorized wheelchair, moving close to each other in a parking lot. Remington can be heard in declassified audio as he relays the broadcast, accusing Richards of pulling a knife on him, while a dispatcher confirms that the police are present.

The suit states that Remington followed Richards, who was in a used wheelchair at a maximum speed of 5 mph, for a third of a mile. Richards, the suit continues, threw away the toolset he was accused of stealing in the parking lot while Walmart employees collected it.

CCTV footage from Tucson Police Department, Stephanie Taylor, shows her running out of her vehicle toward Remington and Richards at the store entrance.

“Stop. He’s got his knife in his other hand. Don’t go to the store, sir,” Remington is heard saying on bodycam footage.

Taylor pulls out her gun and says “Stop now. You have to” before being cut off by Remington firing his gun.

The suit insists the Walmart employee said Richards made no “direct threats” against him. According to the indictment, Remington never said he feared for his safety or that Richards posed a threat.

The lawsuit alleges that Remington did not shoot Richards as an act of self-defense or to defend anyone else as Richards tried to evade, did not pose an “immediate threat”, and did not threaten Lowe’s officer or a nearby clerk.

Remington, the indictment says, acknowledged that an officer was en route with a shotgun with rubber bullets and knew through his radio that five additional units and a supervisor were responding to his location. In addition, the suit notes that Remington was wearing a bulletproof vest.

“This is very hard on our family. Not a day goes by that I don’t think about Richard and the way he died. Without Ryan Remington’s actions, Richard would have turned 62 last week. We love Richard and we miss him,” read a statement from Victoria Richards, Richard Lee Richards’ sister and the manager of his estate.

This article originally appeared on the Republic of Arizona: Lawsuit filed in the fatal shooting of a man in a wheelchair by an officer in Tucson