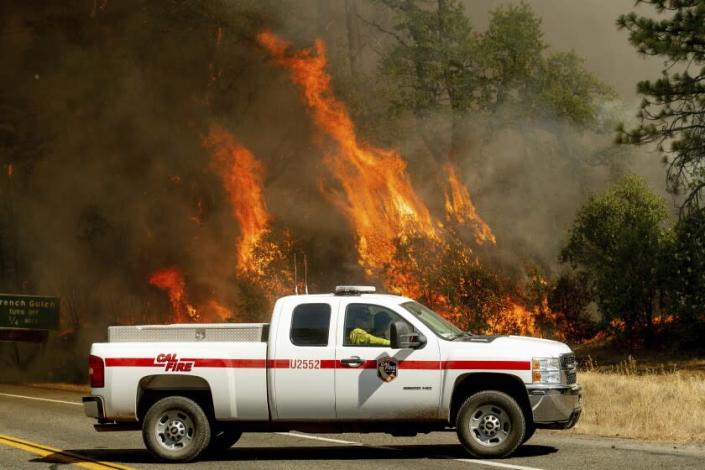 A Nevada man charged with stealing a California Department of Forestry and Fire Protection vehicle and leading authorities in a high-speed chase, sometimes traveling at speeds of about 100 mph, was arrested Friday.

Officers were notified at around 11:11 a.m. that the Cal Fire Police Department was tracking a department commercial vehicle that had recently been stolen from Highway 89 near McCloud, according to the Siskiyou County Sheriff’s Office.

Sheriff’s units joined the chase as the stolen vehicle approached the Miner Street exit on Interstate 5 and attempted to stop the vehicle, but were unsuccessful, according to the Sheriff’s Office.

The driver continued north on the highway, accelerating to speeds of about 100 mph, deputies said.

During the chase, the driver, who was later identified as 35-year-old Jeremy Austin Estep of Fernley, Nev., drove erratically, officers said.

Estep crossed the median and headed south on the 5 before exiting the highway and entering Yreka, officers said.

“The chase continued in the area of ​​North View Drive in Yreka, where Estep stopped and fled the vehicle on foot,” the Sheriff’s Office said. “The officers continued their pursuit on foot, where he was soon arrested.”

He was arrested and imprisoned in Siskiyou County Jail on charges of two felonies — evasion and car theft — and misdemeanor against his arrest, deputies said.

A Cal Fire Siskiyou Unit representative could not be reached for comment or further details.