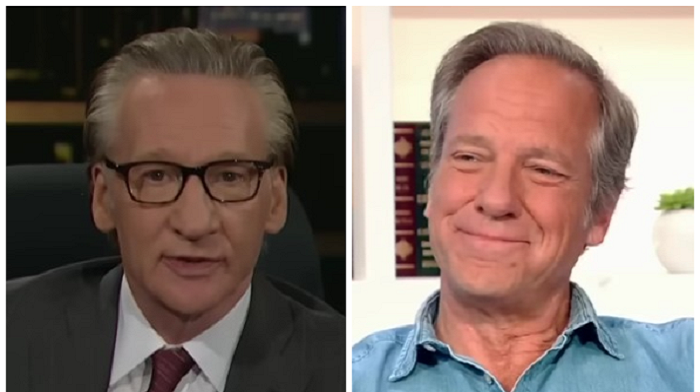 In case you missed the online saga involving the Post, one of its most prominent writers, Dave Weigel, and fellow reporter Felicia Sonmez, well…consider yourself lucky.

Weigel retweeted – meaning he didn’t write, just shared – a comedian’s joke about women and Sonmez responded by demanding punitive action from their employer – resulting in an all-out war on Twitter with the newsroom.

The whole ordeal led to Sonmez being fired due to a days-long row with co-workers and his employer online over the trivial joke, and Weigel was suspended without pay for a month.

Maher and Rowe had a little fun with the situation.

Here’s the joke that kicked off a week of drama:

Fantastic to work in a medium where retweets like this are allowed! pic.twitter.com/zs4dX4qprH

“Real Time” host Bill Maher addressed the Washington Post situation and mocked the newspaper for giving in to Sonmez’s tantrum on Twitter.

“Can you imagine a world that allows jokes you don’t like?” he asked, accusing the outlet of “folding like a condo in Miami.”

He then took a swipe at Sonmez’s younger generation and their constant state of being offended by jokes.

“You think my generation is eyeroll,” Maher said. “Let me tell you about the younger generation. Your sense of entitlement is legendary.

To those who weirdly attack me for talking, or slyly saying things like “Day 7” – of course, I’m still talking.

These are systemic issues that go far beyond a single tweet from any employee. Pushing for change takes much longer than 7 days. 15/

“The whiners always win,” he continued. “They complain that they have not yet taken over. The fact that the Post’s response was to punish one of its top reporters shows that the kindergarten is still in charge.

Maher found some solace in the fact that Sonmez was – ultimately – fired.

“Maybe there is a line. This generation needs to find that line and bring it closer to reason. Because democracy dies in silence,” he concluded.

Nothing captures better what is wrong with “journalism” today than the sad saga of what happened last week at The @WashingtonPost. pic.twitter.com/pqnPYNfT0g

Mike Rowe seemed to enjoy the segment with Bill Maher poking fun at the Washington Post, sharing the video on his social media accounts.

The blue-collar legend shared a critique of the Washington Post with their motto changed to ‘Democracy dies in silence’.

When he’s right, he’s right. And boy is he right about that. https://t.co/b1Ov5vXe8P via @Youtube

Rowe has long been a reader-favorite of TSWT, taking a stand for blue-collar workers being left behind by lawmakers.

In a recent segment on TSWT Business, Rowe explained how Americans are being hurt by inflation and how truckers are being crushed by diesel prices.

Rowe hammered Nike for ads in which they attempted to portray Colin Kaepernick as an American hero, noting that there are many others who sacrificed everything and “just did it”.

“You were silent on the Kaepernick”. Sam W. Hi Sam @Nike are free to celebrate whoever they want, but if I was going with someone who epitomized bravery and sacrifice, I might have taken a different route, especially at this time of year – Tom Burnett. https://t.co/eWK8Rttm4Z #never forget pic.twitter.com/t1LUccIslM

Burnett, along with several other passengers, attempted to regain control of United Airlines Flight 93 from the 9/11 hijackers 17 years ago. Their attempts helped thwart what was surely a suicide mission directed at the White House or the Capitol.

Burnett’s last words in a phone call to his wife were – “We’re going to do something.”

As Trump’s star wanes, another rises: could Ron DeSantis be the new Maga bearer?