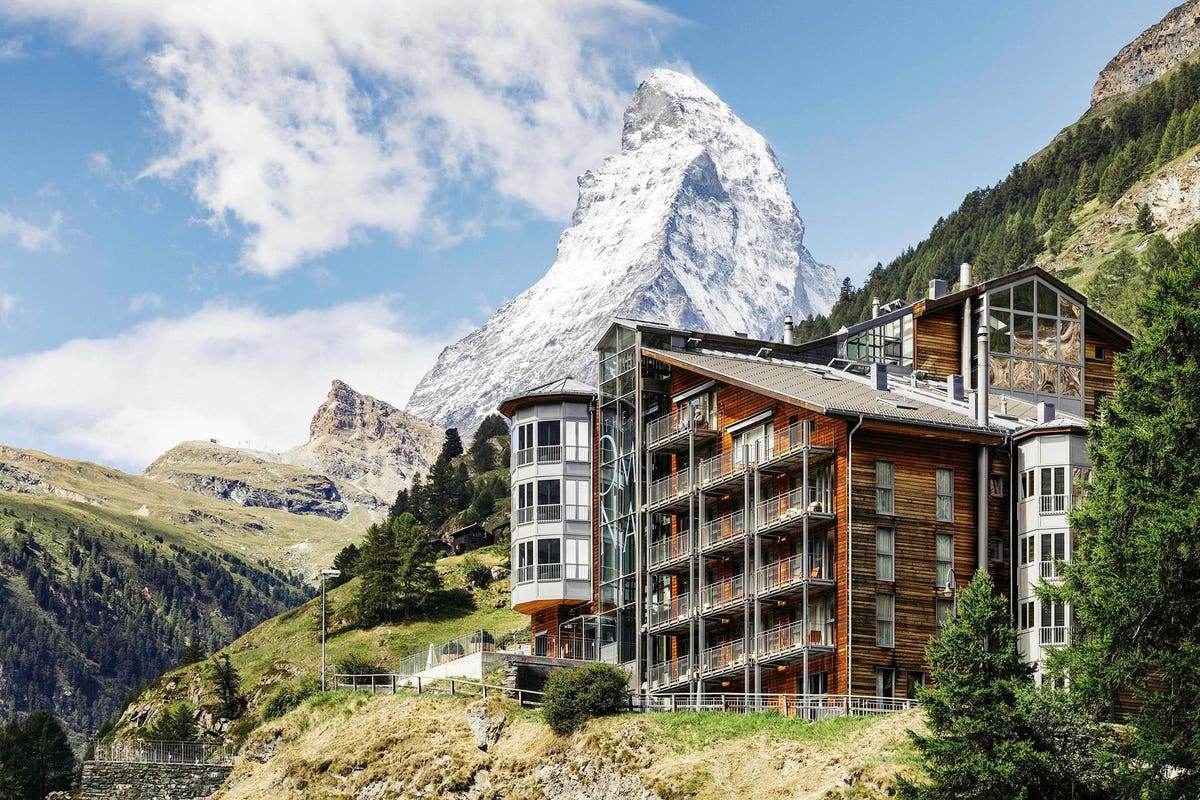 When you arrive in Zermatt, it’s hard not to notice the Omnia. The hotel sits high above everything, not just on a hill, but – improbably – on top of a rock. And when you arrive at the hotel, it’s hard not to be impressed when the driver of the electric trolley (the only vehicle allowed in the Swiss Alpine village) turns off the road and heads straight through a narrow tunnel into the mountain slope. An elevator makes the trip complete.

I was disappointed to learn that Director Christian Eckert wasn’t there during the build because the tech geek in me had some questions.

I was also surprised to learn he hadn’t been there, as the hotel seemed new to me, with its free-floating reception and contemporary atmosphere. But actually it has been around since 2006. “It’s a timeless design that always looks like new,” says Eckert.

The owners would know about design. They are also the founders of the furniture company USM Haller. That furniture is used throughout the hotel, which was designed by New York architect Ari Tayar, along with pieces from notable European-born designers who have deeply influenced the scene in the United States. Among them Mies van der Rohe, Vladimir Kagen and Eero Saarinen. You will find something like this in the permanent collection of the MoMA.

The idea was to “combine an American mountain cabin with European elements,” says Eckert, who also admits he’s never been to an American mountain cabin. (In my experience, the US has a lot more trophy heads, antlers, and vintage firearms than the Omnia, whose designers were wise not to include any.) He clarified that the comparison had to do with community spirit, which it isn’t. common in Switzerland.

There are several lounges, some with fireplaces, that encourage guests to gather. The restaurant has several long tables where new friends sometimes dine together. The design also has a connection to nature – gray granite and white oak are the common elements – and some parts of it can be called quite cozy.

Other parts are less so. The 30 rooms have an abundance of space and sleek furnishings, with a good dose of locally crafted leather and felt. The best rooms have views of the Matterhorn both inside and from the terraces. The pool is sleek and beautiful.

“It’s a niche product for design enthusiasts,” says Eckert. “It is not overloaded like a grand palace hotel. It’s understated.”

It has also become unusual. The 26 rooms have letters instead of numbers – “because our guests are not just numbers to us,” said the receptionist who showed me my room, “and a way to get noticed.” While I’m not sure it made much difference to present myself as “V” instead of “22” at breakfast, it’s a memorable detail.

So was the big, old-fashioned metal room key—a bit of nostalgia that the hotel geek in me adores. The idea is that guests leave them at the front desk when they leave the hotel, leading to conversations about where they are going and how their day was when they come back. Eckert, who makes it a point to personally greet and say goodbye to each guest, says visitors arrive as customers and leave as friends.

It helps that many employees, including the managers, have been working here for a long time. The service is the epitome of Swiss hotel precision, but with a human touch. Eckert: “The hotel industry is not a profession. It’s a passion.” It shows.

The hotel is also gaining points for unusualness with its recent reinvention of its restaurant, which was previously on the path of Michelin aspirations. Now owned by executive chef Tony Rudolph and sous chef Martin Zuber, it’s more relaxed and creative. Although not a vegetarian restaurant, every starter and main course on the new “Alpine excellence” menu is a fully realized composition of plant-based ingredients.

Each dish, such as smoked paprika with salted lemon, pine and red onion, or pea gnocchi with fried chanterelles, sugar peas, tarragon and apricot, stands on its own. Meat and fish are available as a side dish for those who want it. It’s a bold move—and it’s hard to imagine in an American mountain cabin—but a successful one, and I’d love to see it catch on.

The Bridge VI 2022: discovering this year’s gems at the most exclusive garden party in the world

This $100,000 golf adventure takes you across Europe on a luxury cruise ship

Maike Metals from China to sell and restructure assets – FT