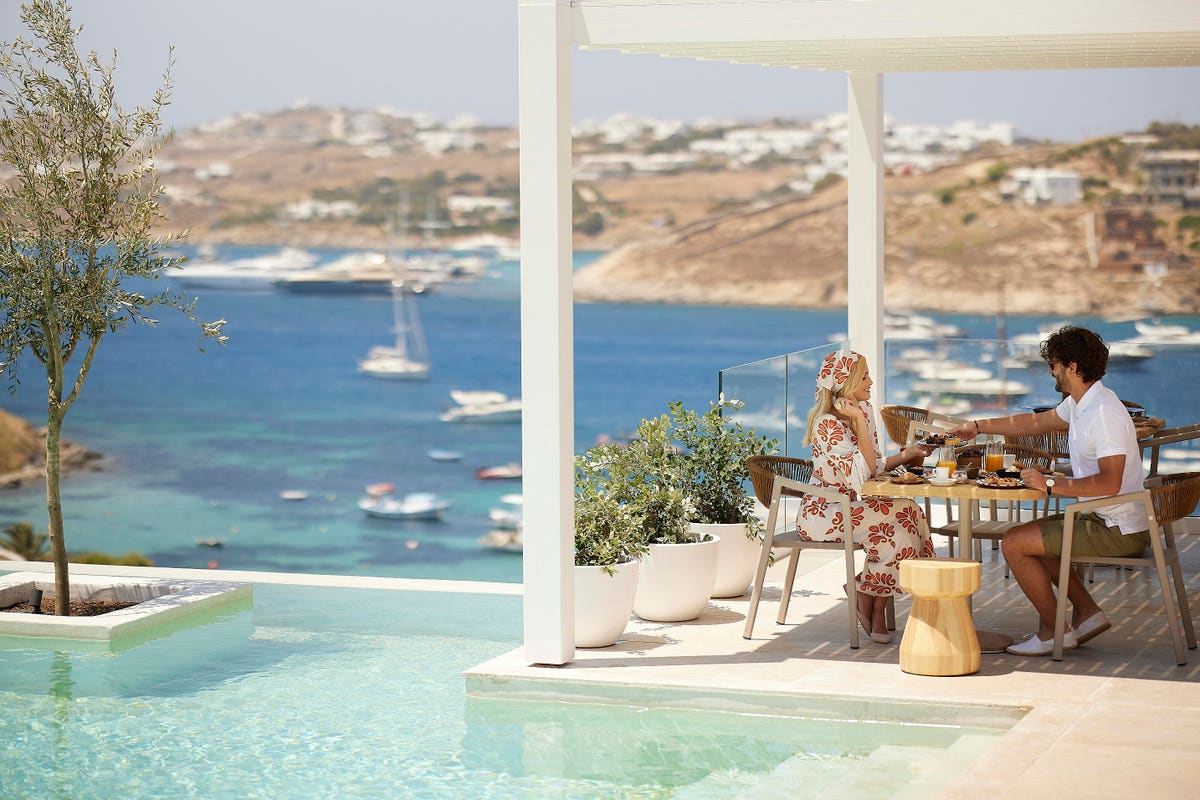 In 2022, Mykonos is of course known for its nightlife, over-the-top luxury and unashamed excess. The story went that Elon Musk was on the island at the same time as me this summer. I didn’t see him, but I did see Salt Bae posing for selfies with guests at his hugely expensive Nusr-Et restaurant, and I was asked to punch one of the two Borat banana-sling-wearing men who made it. end of their bachelorhood.

So it was a relief to retire to the quiet luxury of an attentive hotel. Fortunately, Mykonos still has some of that, including the (newly renovated) oldest five-star hotel on the island and one of the newest.

Built in 1960 on the Kato Mili (those famous windmills in Mykonos town), the Mykonos Theoxenia quickly became a landmark that attracted the likes of Brigitte Bardot. Aristotle Onassis brought Jackie with him. The jet set followed, enjoying the island sun and the refined simplicity of Greece.

The hotel reopened in July after an extensive transformation by VOIS architects that paid tribute to and updated the original design of postmodern architect Aris Konstantinids. It was a building ahead of its time. Now it’s a welcome return to minimalism.

Being a monumental domain protected by the Greek Ministry of Culture, the new architects had to use the same traditional Cycladic building techniques used in 1960. The exterior is made of the same stone that forms the existing sea wall. The harmony with nature – and nostalgia – is obvious.

Inside, the 49 rooms have the right simplicity, with contemporary features and comfort. Finding a power outlet is no problem, but in the larger rooms, the entire work and entertainment area can be hidden behind a soft linen curtain.

A few of them have private pools, but the main pool—not to mention the clear Aegean Sea next door—is inviting and the Kou Kou Bar’s service is friendly and prompt. The same goes for the star-lit poolside dinner service, serving a low-key meal of well-prepared Mediterranean dishes (grilled fish and Greek salad, of course) to diners not in the mood for crowds. No one cares if you dress up.

A few kilometers away in Ornos, another understated luxury hotel with a touch of nostalgia opened in June. Once in Mykonos is a bit more hip than Theoxenia, reflecting the property’s past as a luxurious and cosmopolitan villa frequented by artists and intellectuals.

It is quite large for a 59 room hotel, with reception, a large swimming pool and a main restaurant atop a hill overlooking Ornos beach. The accommodations, designed by architect Fivos Stavrides of F Studio Designers, are set up against the hill in the style of a (huge) ancient Greek amphitheatre. Some rooms have “chill-out pools” in front of them, with a path over the water to enter the room. It is an impressive infrastructure.

But inside, the rooms have a post-modern feel and boho-chic design, with whitewashed walls and natural materials such as copper and stone. Some have real trees in them. Everything is spacious and bright. Jo Malone’s amenities are a lovely touch.

However, the spa goes a little more local, using organic ingredients from the Aegean Sea and Mykonian soil, which are said to be rich in nourishing nutrients. It’s small but fully equipped, and my massage hit all the right spots.

So did the poolside restaurant, where Chef Nikos Skordakis (led by the hotel group’s chef Kyriakos Sotiriou, who has extensive experience in five-star hotels and Michelin-starred restaurants) has curated a menu of classics from Greece and past. At dinner, that means grilled octopus, squid and mullet, or perhaps beef tartare or crayfish risotto, while during the day there are salads, flatbreads and pastas. They plan to launch an international luxury fine dining restaurant brand soon.

Both hotels have one last detail that offers an escape from the madness of Mykonos. They partner with a local yacht company to offer private cruises along the island’s coastline and to nearby islands such as Delos and Rhenia, and with dive centers that take guests to explore the underwater Greek and Roman ruins – Mykonos as it is For real used to be.