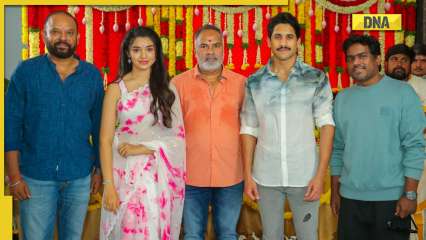 Telugu superstar Naga Chaitanya, who has made headlines due to reports that he is dating Made In Heaven star Sobhita Dhulipala after his split from ex-wife Samantha Ruth Prabhu in October last year, has officially kicked off her new movie #NC22 with the pooja ceremony on Thursday, June 23rd.

Directed by Venkat Prabhu, the bilingual Tamil and Telugu film will see Naga team up once again with his Bangarraju co-star Krithi Shetty. The film is directed by prolific filmmaker Venkat Prabhu who marks his debut in Tollywood aka Teleugu cinema with the film and Naga’s debut in Kollywood aka Tamil cinema.

Baahubali star Rana Daggubati, who was most recently seen in the romantic action film Virata Parvam opposite Sai Pallavi, and Doctor Sivakarthikeyan star, whose last outing was his coming-of-age comedy-drama Don, also attended the pooja ceremony.

Sharing her happiness at the launch of her new film, Krithi wrote on her Instagram account, “I feel blessed, a big thank you to all the guests. Thank you to the fans and the public for such a positive response, I always love you, I will work hard and make you proud,” while sharing photos from the event.

The film, which now bears the working title of NC22, will see music composed by legendary father-son duo Ilaiyaraaja and Yuvan Shankar Raja, who also happen to be director Venkat Prabhu’s paternal uncle and cousin.

Ahead of NC22, Naga, also referred to as Chay by his fans, is set to make his Bollywood debut in the highly anticipated Laal Singh Chaddha starring Aamir Khan and Kareena Kapoor Khan in the lead. Director Advait Chandan is set to clash with Akshay Kumar’s Raksha Bandhan on August 11.

“What a fight! : Twitter praises Ireland for nearly chasing 226 against India | Cricket News