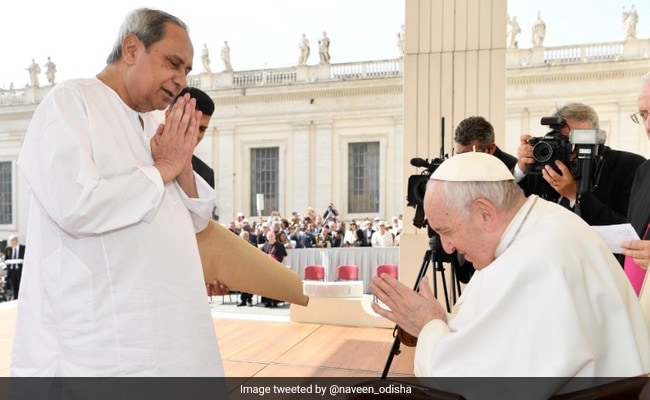 The Chief Minister leads a high-level delegation to Rome and Dubai. The delegation is due to visit the World Food Program (WFP) headquarters in Rome to share Odisha’s “transformational journey” in food security and disaster management.

On Tuesday, the Chief Minister paid tribute to freedom fighter Mahatma Gandhi in front of the MG Memorial Statue in Piazza Gandhi in Rome. Speaking on the occasion, Mr. Patnaik said he was inspired by the ideals and principles of the father of the Indian nation, Mahatma Gandhi.

It was an absolute pleasure to meet His Holiness Pope Francis (@Pontifex) in Vatican City. I thanked him for the warm audience and wished him good health and long life. pic.twitter.com/B1oA5BBbnv

In 2018, at the first meeting of the National Committee for the Commemoration of the 150th Anniversary of the Birth of Mahatma Gandhi, Mr Patnaik had proposed that the greatest tribute that India could pay to Gandhi on the occasion of his 150th birthday was to include the unique Indian ideal of Ahimsa, of non-violence, in the preamble of the Indian Constitution.

Mr Patnaik at the time also quoted Mahatma Gandhi that there can be no progress without peace.

In 2019, Mr. Patnaik unveiled the Gandhi Talisman in the Lok Seva Bhawan. At this time, he said the Talisman will inspire all to work selflessly for the cause of the poorest of the poor.

On his return, Naveen Patnaik is due to meet investors from the Middle East and neighboring regions in Dubai.

“He will invite potential investors to come and invest in Odisha and assure them of the full support and facilitation of the state government,” a statement read.

He will also have individual meetings with major investors in the region. A high-level industrial delegation from Odisha will also be present during the investor meeting for possible partnerships with foreign investors, he added.

Mr. Patnaik is also due to meet with the Odia Diaspora from the Middle East in Dubai and discuss with them Odisha’s transformational journey over the past two decades and invite them to partner with the state government, the office said. Chief Minister in the statement.