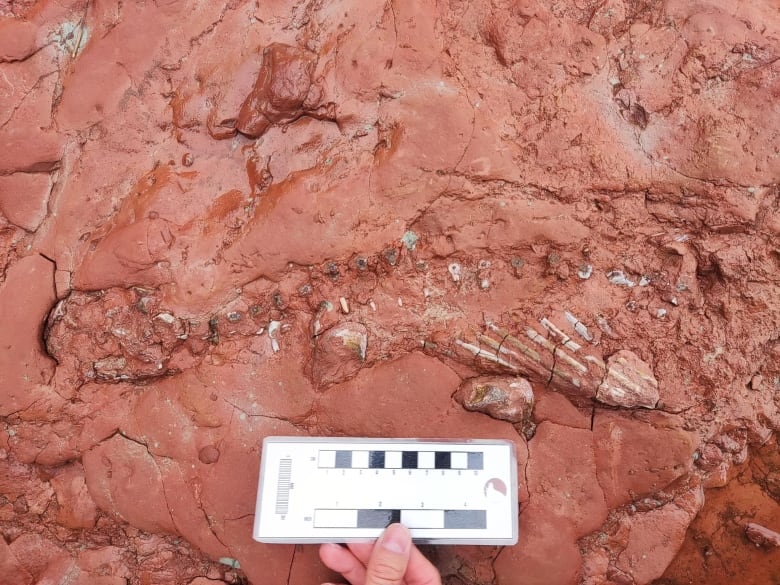 A PEI school teacher has made the discovery of a lifetime after coming across a fossil that could be 300 million years old.

Lisa Cormier was walking in Cape Egmont on Monday afternoon when she saw something unusual partially buried on the shore.

“I saw something that I thought was a carrot,” she said. “And when I looked more closely, I realized there were ribs. And then I saw the spine and the skull.”

Cormier took photos of her find to share with her family.

Her mother-in-law sent them to Laura McNeill of Prehistoric Island Tours. McNeill immediately contacted Cormier, as well as other specialists.

John Calder, a geologist and paleontologist, was one of them. He said the fossil appears to be from nearly the late Carboniferous and into the Permian. That is about 300 million years ago.

Calder, who has written a book on PEI’s geological heritage, said a find like this is “extremely rare.”

“A fossil like this emerges every 50 or 100 years,” he said. “I mean, there’s no real frequency, but it’s rare. And this could be a unique fossil in the tree of life… of amphibian, reptile, mammalian evolution before us.”

The fossil has not been identified, but Calder said it is likely a reptile or at least a very close relative.

“This is early in the evolution of amphibian reptiles, and they branch out,” he said. “And so it becomes a real puzzle. It will probably take a good year to figure out the identity of this thing.”

He said very few specimens from that period have been discovered and it could even be a previously unknown species.

An excavation team that included Matt Stimson, Patrick Brunet and Linda Berko was able to excavate it after a few days of work.

On Saturday, Parks Canada employees carefully moved the fossil from the site to a facility in Greenwich that serves as a sort of paleontological repository.

Calder said it won’t stay there too long, as it will have to be taken to a paleontology lab to be seen by experts.

“They will probably use a CT scan,” he said.

He said fossils like this one in PEI have become more frequent in recent years. He advised islanders to keep their eyes open.

“There are far more ordinary people on the beach than paleontologists, and most of these important discoveries have not been made by scientists,” he said.

Cormier said the find is a unique opportunity to leave some sort of legacy in the history of science.

“To think I’ve found something that may be 300 million years old is incredible,” she said.

“I think it will be a one-off” [thing]but I’ll continue my walks and I’ll go on looking for sea glass and maybe I’ll find something else.”