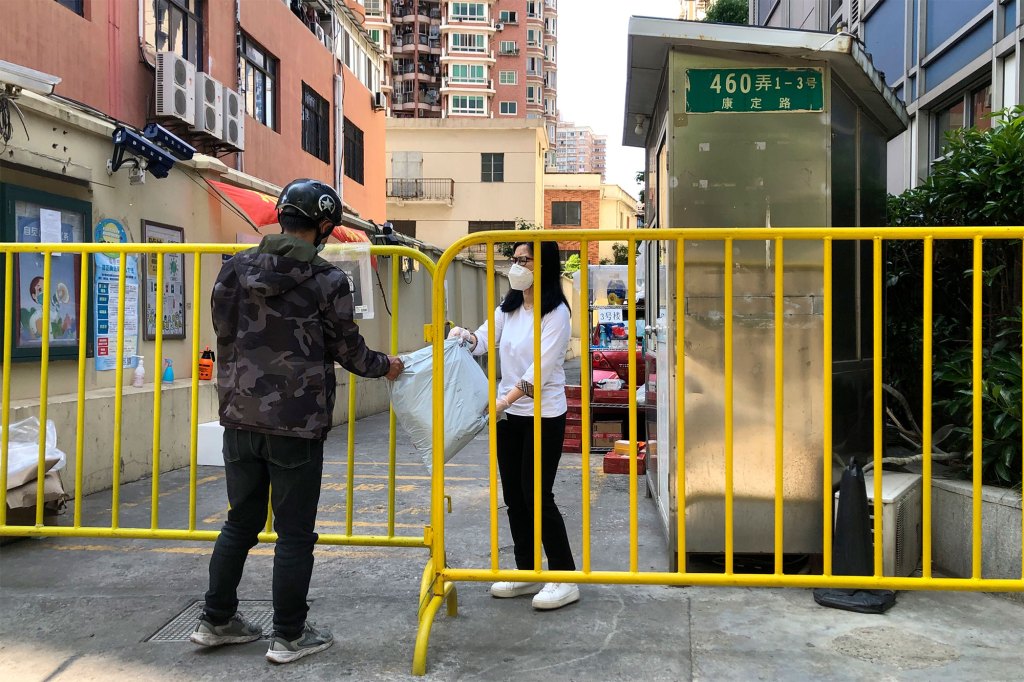 One photo sums up the mind-boggling difference in Covid rules between two adjacent Chinese districts.

The image, shared on social media by Yanzhong Huang, senior fellow of the Council on Foreign Relations for global health, shows locals on one side of a street queuing for Covid testing, while diners on the other. enjoy their restaurant meals.

dr. Huang said the photo represented a “story of two districts in Chengdu, (a city in) Sichuan Province.”

“Residents of Chenghua district (left) line up to be tested for Covid, while residents of Jinniu district (right) wait for a nice meal,” he wrote.

He said the Chenghua district is currently under strict lockdown rules following a concentration of Covid cases in the area.

According to china dailyfood and required services would be delivered to people in homes along Fuqing Road where positive cases had been detected.

Elsewhere in the neighborhood, households can have one person leave the house once a day to buy essential items.

The strict restrictions were expected to last for five days, but city authorities reportedly told locals that the measures could be extended.

With the help of volunteers and delivery drivers, vegetables, meat, food and other items were delivered to residents who were not allowed to leave their homes.

Another photo shared on Twitter showed incarcerated Chenghua residents reaching over a border fence with small signs in reported attempts to sell products.

An incredibly different life is being lived by people separated by one crucial road in China, where strict lockdown rules have been reintroduced.

“Today, peddlers are trying to sell vegetables outside the closed-off district in China,” wrote the person who shared the image.

Chenghua falls into a high-risk category, meaning people are not allowed to leave their homes until the risk level is lowered to medium.

The risk is only reduced if the area remains Covid-free for a week and all residents test negative on a seventh day, Bloomberg reported.

Once there have been no infections for three days, the area is relegated to low risk.

On the side of the street in the Jinniu district, residents were shown sitting near each other at restaurants.

“China has introduced comprehensive systems and digital tools to help people across the community stay safe and reduce exposure to Covid. They use QR codes that give people color-coded information about their exposure,” Mr Cross told news.com.au.

“In this image, people on one side of the road are enjoying dining because they have not been exposed to Covid, while on the other, people are queuing up for testing.

“Although the image seems to give a different perspective, it is a safe and very effective system.”

Mr Cross said the photo showed how China was “highly organized and efficient”.

“It’s a system that allows people to continue their lives as normally as possible, while also ensuring that there are systems in place to control and minimize outbreaks,” he said.

There are strict border controls

For people who have to leave Chengdu city, they must provide a negative result of the nucleic acid test within 48 hours, publication Crisis 24 reported. Those in the high-risk Chenghua area are still required to comply with stay-at-home orders during their stay.

Seven days of isolation or centralized quarantine must be completed by people arriving in Chengdu if they have been in medium or high-risk areas in the past seven days.

Face masks are mandatory in busy areas and on public transport, the publication reports.

Non-essential venues, including entertainment and sports venues, will be allowed to reopen in low-risk areas, with a negative Covid test required within 48 hours to gain entry.

While restaurants are allowed to offer a dinner service, officials have encouraged residents to use takeout and delivery options instead.

Communities considered high and medium risk are reportedly monitored by security agents, who are tasked with checking checkpoints to ensure no illegal movements are made.

Strict Covid zero restrictions are also impacting the Chinese economy, with manufacturing activity falling in July, according to official data.

The Purchasing Managers’ Index (PMI), an important gauge of manufacturing activity in the world’s second largest economy, came in at 49.0 in July, down from 50.2 in June and below the 50 points that separating growth and contraction, National Bureau of Statistics data showed.

While sweeping Covid restrictions have been eased in major cities such as Shanghai and Beijing, sporadic lockdowns across the country have left businesses and consumers concerned.

“In July, the manufacturing PMI fell…due to factors such as the traditional off-season for manufacturing, insufficient release from market demand, and declining prosperity of high-energy-using industries,” NBS senior statistician Zhao Qinghe said in a statement.

Stay up to date with today’s most important news

The number of companies saying there was insufficient demand in the market had also increased for four straight months, he said, noting that this was the “biggest difficulty” among manufacturers.

But officials show little sign of easing tight pandemic restrictions, with policymakers appearing to emphasize zero Covid over growth at a politburo meeting this week, where they pledged to aim for “the best outcome” rather than economic and achieve social goals.

Chinese leaders had originally set a GDP growth target of around 5.5 percent for the full year, but with economic growth of just 0.4 percent in the second quarter, analysts think that target is unlikely to be met.

This follows policies to boost consumption and with a pick-up in construction activity, the NBS statement said.