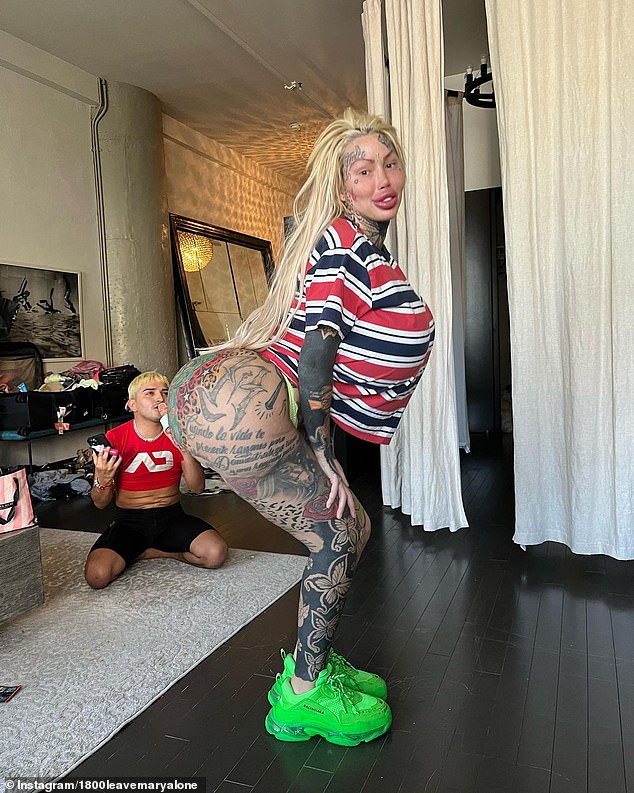 Surgery-addicted social media star Mary Magdalene has been partying with her friends in West Hollywood for the past few weeks.

And after a series of benders and even a brush with death, police were finally called to Mary’s Airbnb on Tuesday.

The Canadian OnlyFans model, 30, shared photos of two police officers inside the residence with her 140,000 Instagram followers.

In one photo, an officer could be seen inspecting something near his bedside table with a flashlight.

‘Girl, who called the police on me?’ she captioned an image, before adding, “OMG ew.”

Hours later, Mary appeared to be in high spirits as she took to Instagram to share a video thanking her loyal fans.

“My supporters, you guys are very ride or die. People who fuck with me really fuck with me and I love that, really appreciate it. 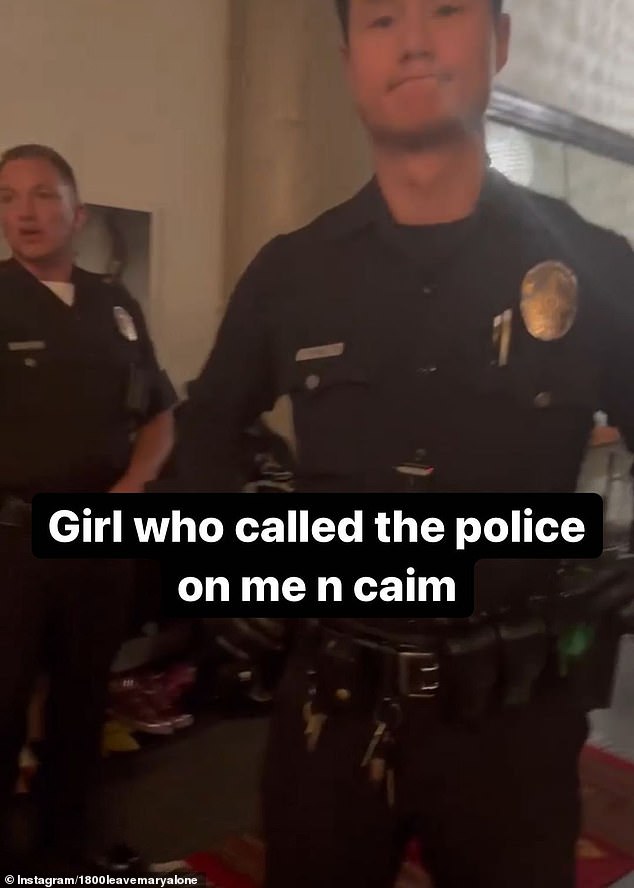 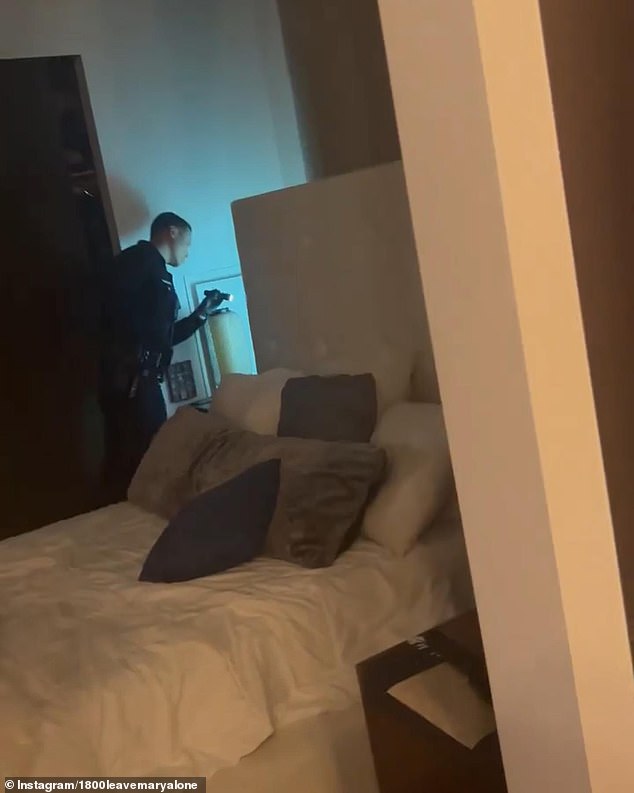 In one photo, an officer could be seen inspecting something near his bedside table with a flashlight

The Canadian star has spent the past few weeks partying at various West Hollywood nightclubs or at her Airbnb with friends.

Earlier in the week, she expressed her love for law and order by posing for a photo with a group of local cops.

Wearing an American flag bikini top and skinny jeans, she captioned it: “I love the police.” Cops lover. 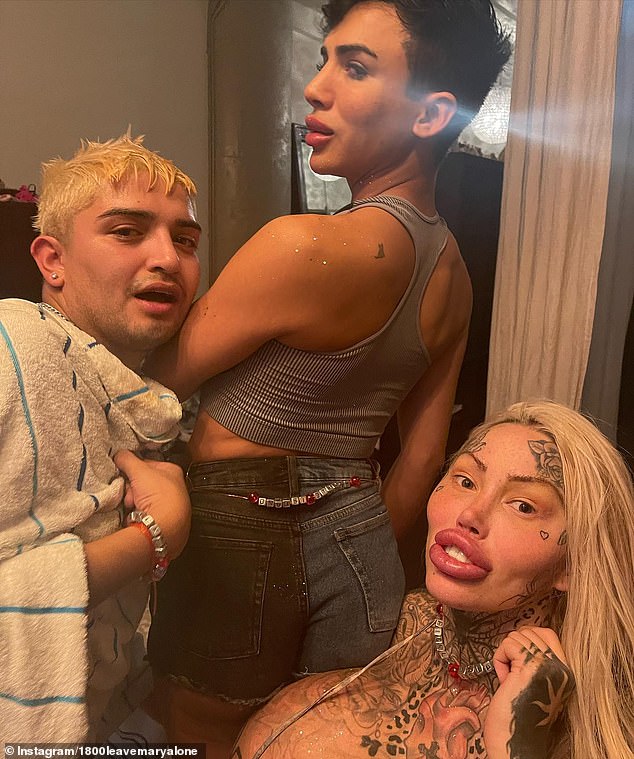 It comes after Mary was rushed to hospital amid fears she might die of sepsis after illegal silicone injections she had in her buttocks began to rot.

Earlier this month, the 30-year-old pleaded with her Instagram followers to help get her to a California hospital after her body started rejecting her silicone injections, which she had done by an unlicensed practitioner in May.

In a series of frantic posts, she said her injections were “rotting” and shared graphic photos of the open sores on her back.

Fresh tattoos on her breasts also got infected and failed to heal, which further aggravated her health issues. 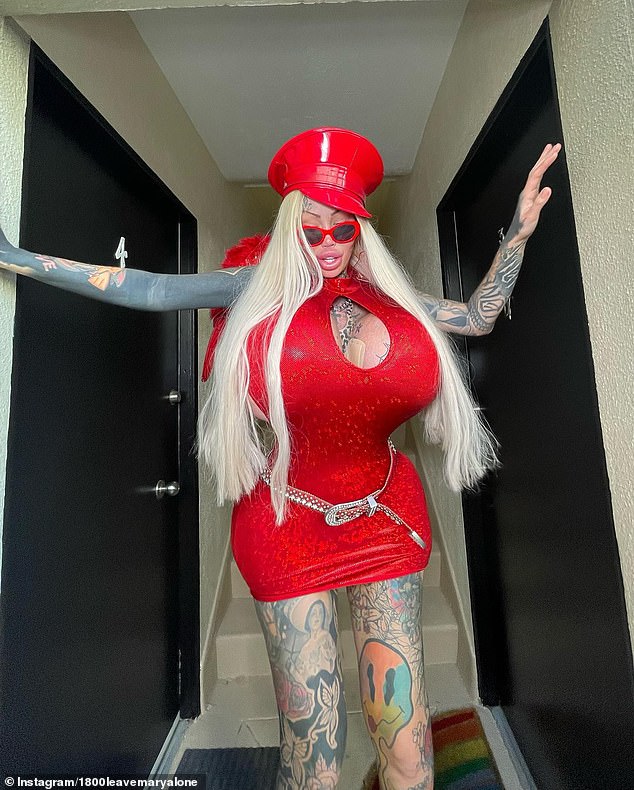 ‘I’m so afraid. My body seems to be fighting a big infection because my three tattoos aren’t healing either. They are all infected with open wounds, she cried.

She wrote in a later post: “Please let me know [a] good wound care clinic in Los Angeles. Seems like the most logical idea right now, instead of a random walk-in clinic or hospital. 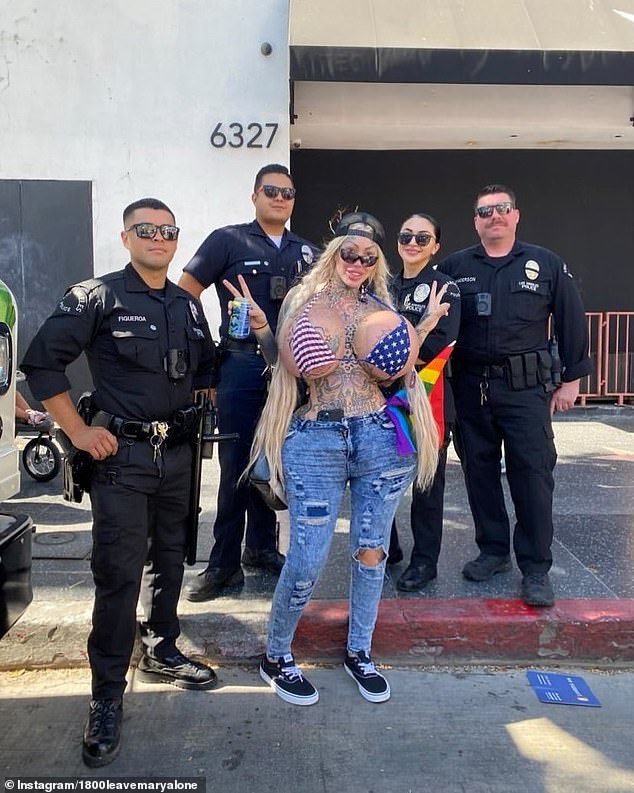 Earlier in the week, she expressed her love for law and order by posing for a photo with a group of local cops

A pale Mary then broke down in tears on Instagram Live as she told fans her wounds were bleeding and she didn’t know what to do.

Fans begged her to go to the ER to “avoid sepsis” and not worry about the cost of American medical care.

She eventually made it to the hospital and spent the night being treated, before being prescribed antibiotics. 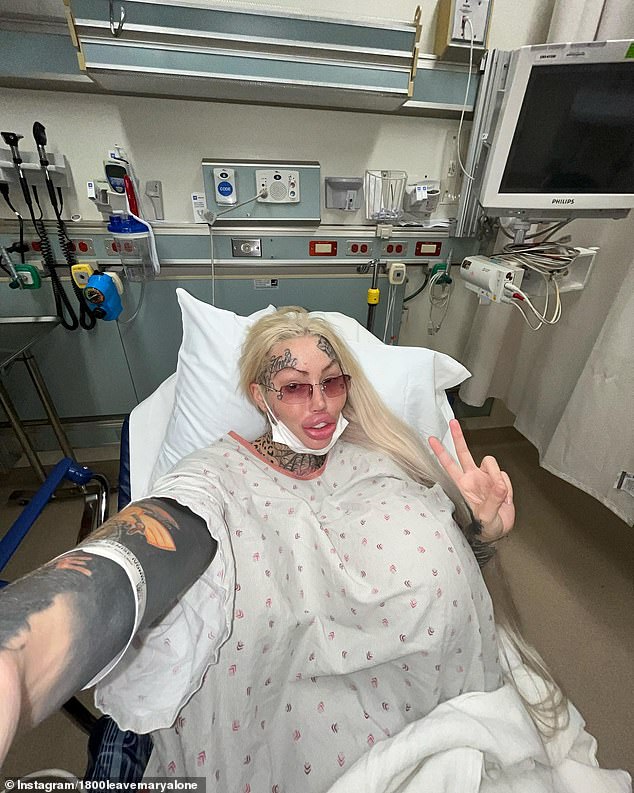 It comes after Mary was rushed to hospital amid fears she might die of sepsis after illegal silicone injections she had in her buttocks began to rot.

Her wounds seem to be healing now and the star has started partying again with her friends.

The heavily injected and tattooed model had her first cosmetic procedure aged 21.

Since then, she has had several breast and nose jobs, buttock lifts and injections, as well as a brow lift, fat transfers, veneers, liposuction and more.

In April, the star claimed she was no longer able to fully close her mouth after a lip lift and another round of lip fillers. 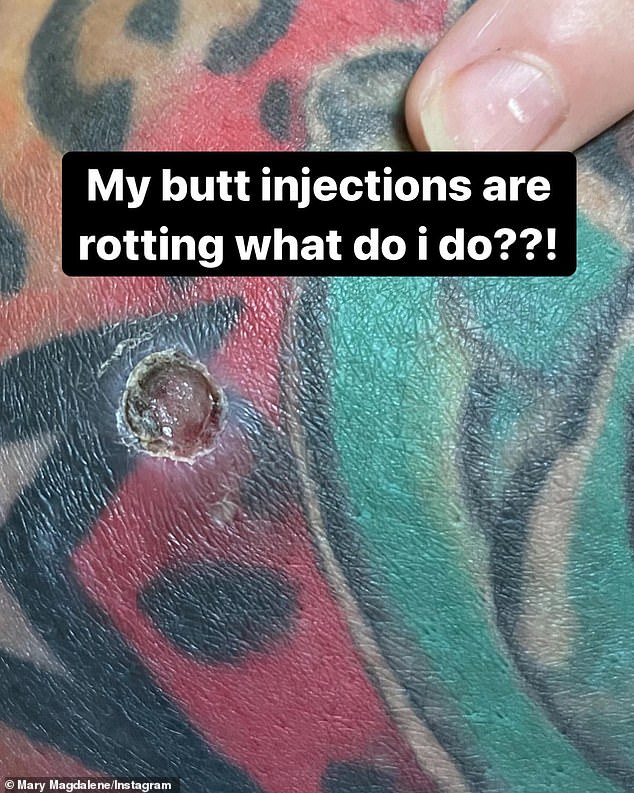 In a series of frantic posts, she said her injections were ‘rotting away’ and shared graphic photos of the open wounds on her back 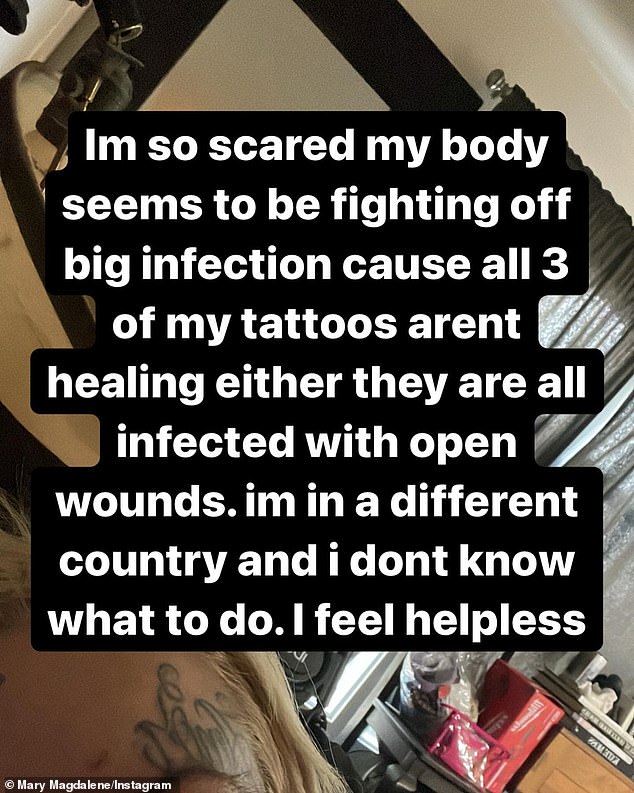 In 2018, Mary nearly died on the operating table during an operation to “puff up” her vagina in Colombia.

“I had to have two blood transfusions,” she told The Sun of the heartbreaking ordeal.

“The doctor said I was losing so much blood and turning very pale. He thought I was going to die. 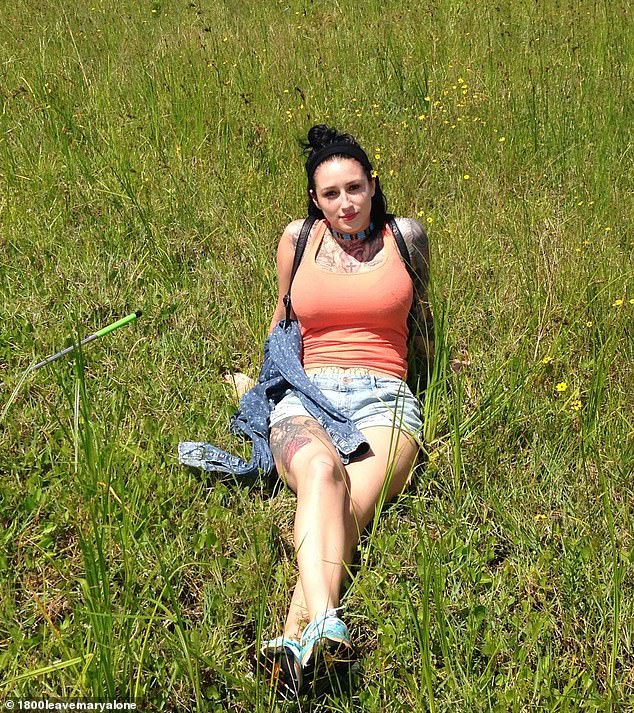 Before her makeover: Ms Magdalene had her first cosmetic job done aged 21

The star said she wanted this look to have “the biggest vagina in the world”.

“So basically there’s this contraption you use and it sucks your p***y then it makes it very bloated so I told the doctor I just wanted it to look like that permanently” , she told the No Jumper podcast.

“I would say it’s a women’s ball bag. I will continue to grow it and make it bigger. I’m going to give myself injections. 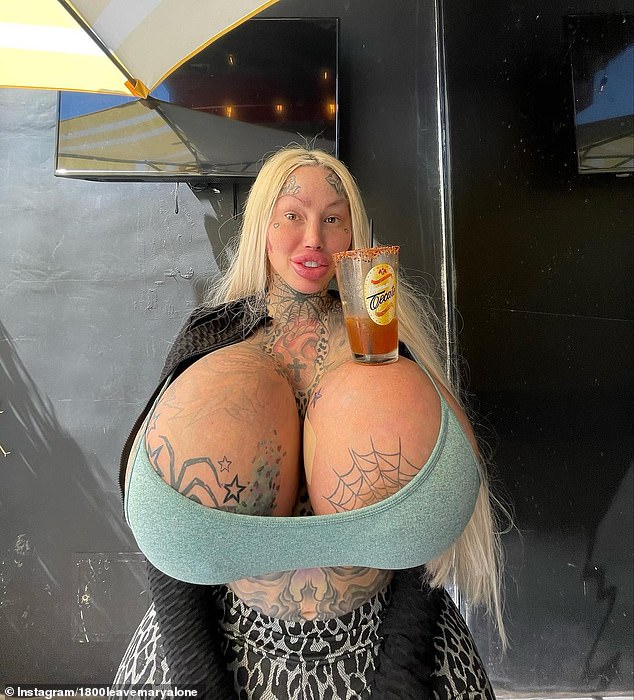 Mary has had several breast and nose jobs, butt lifts, implants and injections, as well as a brow lift, fat transfers, veneers, liposuction and more.