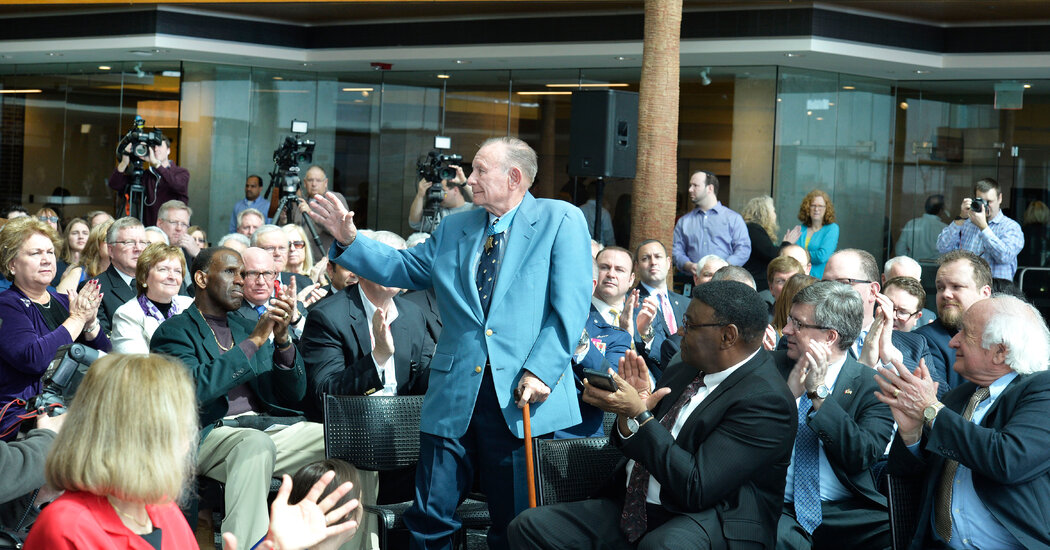 Robert E. Simanek, who was awarded the Medal of Honor for saving his fellow Marines from serious injuries or death by falling on a live grenade thrown by Chinese communist troops during a battle in the Korean War, died Monday in West Bloomfield, Michigan. He was 92 and was among the last three Korean War veterans alive to receive the medal, the military’s highest award for bravery.

His death, in a hospital, was confirmed by his daughter, Ann Simanek Clark.

Private Simanek with his company was patrolling an area called Outpost Irene, just north of Seoul, in August 1952 when it was ambushed by enemy soldiers firing mortars and small arms. His unit suffered heavy losses. And then a few grenades landed in a trench where he had taken cover.

He kicked one of the grenades, but didn’t have time to throw the second. So he fell on it. The explosion of the grenade penetrated his right hip and lower leg, but the other Marines in the trench were unharmed.

“I had been to the outpost before and considered it a vacation because nothing had ever happened during the time I was on that particular part of the line,” Simanek recalled in an interview with the government’s website. Department of Defense News in 2020. “So I took an old Reader’s Digest and a can of precious beer in my big back pocket and thought I was going to have a really relaxing situation. That’s not how it went.”

See also  The Online Life and Death of Bianca Devins

When the Marines went up a hill, they fell into a trap.

Private Simanek and the other Marines were pinned down. Trained as a radio operator and gunner, he sent out a nearby tank and aimed his fire at the enemy bunker, which was partially hidden by the terrain. After the grenade shot him, he managed to crawl out of the ditch on his hands and knees until a rescue crew found him and evacuated him aboard a helicopter.

Private Simanek, who served in the First Marine Division, was taken to a hospital ship and treated in Japan for severe nerve damage to his leg, then returned to the United States for treatment. After many months in military hospitals, he was given a medical discharge.

President Dwight D. Eisenhower presented him with the Medal of Honor in October 1953. Private Simanek was quoted as saying “his daring initiative and great personal courage in the face of almost certain death.”

The last two surviving Korean War veterans to receive the medal are Hiroshi Miyamura, 96, an army corporal who killed at least 50 Chinese troops in a firefight near Seoul before being captured, and Colonel Ralph Puckett Jr., 95, who rescued. are vastly outnumbered Army Rangers from destruction in combat with Chinese forces despite being badly wounded.

Robert Ernest Simanek was born in Detroit on April 26, 1930, the third son in a family of four brothers. His father, Edmund, worked for the city of Detroit. His mother, Florence (Hanson) Simanek, was a homemaker.

Robert graduated from high school in 1948 and worked for the Ford Motor Company and General Motors before being inducted into the Marine Corps in August 1951.

In addition to his daughter, Mr. Simanek, who had lived for many years in Farmington Hills, Michigan, is survived by his brother, David. His wife, Nancy (Middleton) Simanek, died in 2020.

In January 2021, the Navy announced that Expeditionary Sea Base 7, a vessel that could be used to support a wide variety of military operations, would be christened the USS Robert E. Simanek upon launch, expected in 2024.

Shrapnel from the exploding grenade that had smothered Mr. Simanek remained in his leg for the rest of his life. Over the years, he was often called upon to tell about his exploits in Korea, but he disdained bravado. His daughter said he “didn’t like public speaking” and “felt he acted instinctively from his training.”