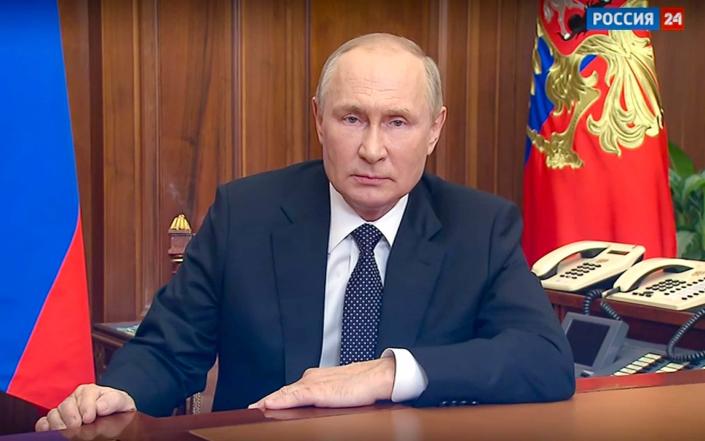 Russia’s stock market collapsed on Wednesday after Vladimir Putin ordered his country’s first mobilization since World War II and warned the West that he was ready to use nuclear weapons.

Putin’s belligerent warning sent the Moscow stock market’s MOEX index plummet by as much as 10 percent, marking the second day in a row of major losses.

The MOEX was already down 9 percent on Tuesday after the president’s threat to annex parts of Ukrainian territory currently held by his country’s troops, using what has been dismissed as “mock referendums”.

The escalation also sent shockwaves through the gas markets, with the European benchmark price jumping 8 percent to around €210 per megawatt hour.

Sterling and the euro weakened as investors fled to the dollar. The US currency hit a 20-year high against a basket of six other major currencies on Wednesday morning.

See also  London Marathon 2022: when is it, what time does it start and the best viewing spots to watch live

The Russian stock market has already taken quite a dent over the past year, with the MOEX roughly halved from about 4,000 points a year ago to just over 2,000 today.

Susannah Streeter, senior investment and market analyst at Hargreaves Lansdown, said: “There have been growing fears that the war in Ukraine will escalate sharply, forcing investors to flee to safe havens.”

Mr Putin declared “partial mobilization” on Wednesday morning, calling up 300,000 reservists in a major escalation of his flagrant invasion of Ukraine.

In a televised speech, he also warned that “those who are trying to blackmail us with nuclear weapons should know that the wind patterns can also spin in their direction”.

His threats came after a lightning-fast Ukrainian counter-offensive inflicted the worst defeats on Moscow forces since the early months of the conflict, retaking more than 10 percent of Russia’s territory.

It came as the EU quietly eased sanctions on the transportation of Russian coal and other commodities over concerns about “energy insecurity around the world”.

New guidelines issued by Brussels say member states can transfer certain goods, including coal and related products, “to combat food and energy insecurity around the world”.

Previously, the guidelines prevented EU operators from transferring coal and providing services – such as financing and insurance – to all shipments coming from Russia.

Brussels said a complete ban on Russian coal remains in place for shipments to the EU and that the rule changes only affect goods destined for third countries, what the bloc calls countries that are not in the EU or the wider Free Trade Association.

A spokesman for the EU commission, which released the change, said the bloc is “completely committed to preventing its sanctions from having an undue impact on trade in critical items to third countries around the world”.

The change has raised concerns among some member states, including Poland and the Baltic states, according to Bloomberg.

EU officials have previously eased sanctions on some Russian food products following Moscow’s claims that the restrictions were the cause of rising food prices internationally and in poorer countries.

Diplomats fear, however, that the latest update risks going beyond food security commitments and instead loosening sanctions on Russian commodities.