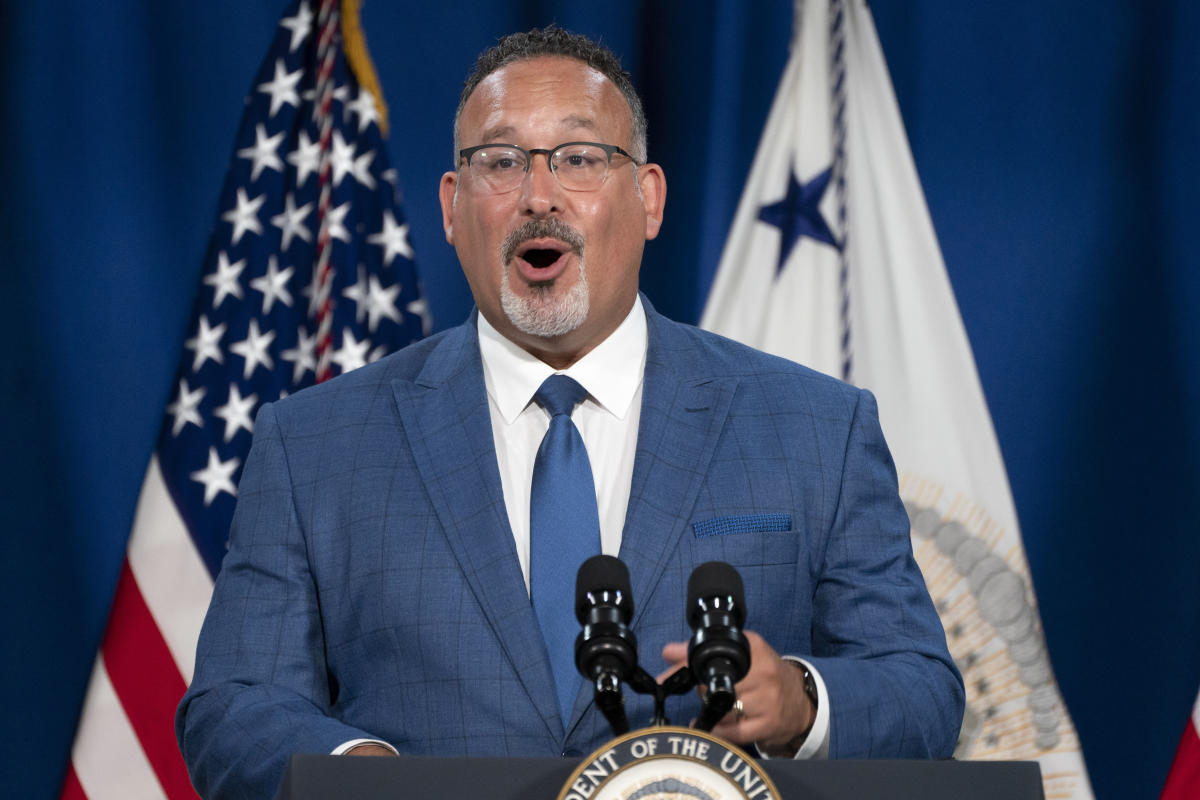 The Biden administration has agreed to forgive $6 billion in student loans for about 200,000 former students who say they were defrauded by their colleges, according to a proposed settlement in a Trump-era lawsuit.

The agreement filed Wednesday in federal court in San Francisco would automatically cancel federal student debt for students who were enrolled in one of more than 150 colleges and then applied for debt cancellation due to misconduct. presumed schools.

Almost all of the schools involved are for-profit colleges. The list includes DeVry University, University of Phoenix and other chains still in operation, as well as many chains that have folded in recent years, including the ITT Technical Institute.

Education Secretary Miguel Cardona said in a statement that the settlement would resolve the claims “in a way that is fair and equitable to all parties.”

The deal still needs to be approved by a federal judge. A hearing on the proposal is scheduled for July 28.

If approved, it would mark a major step in the Biden administration’s efforts to clear up a backlog of claims filed under the Borrower Defense Program, which allows students to have their federal loans forgiven. whether their schools were advertising false claims or misleading them.

The class action lawsuit was originally filed by seven former students who argued that President Donald Trump’s Education Secretary Betsy DeVos intentionally blocked the Borrower’s Defense process while she rewrote her rules. When the complaint was filed, no final decision had been made on the claims for over a year.

When the department under DeVos began adjudicating the claims months later, it issued tens of thousands of denials, often without any explanation. At the time, the judge handling the case blasted DeVos for the “freakish pace” of rejections, saying his approach “hangs borrowers dry.”

Tens of thousands of borrowers were still in limbo when the Biden administration took over and began negotiating a settlement in 2021, court documents show. The latest federal data shows there are more than 100,000 pending claims for borrower defense.

Under the proposed settlement, anyone attending an eligible school and requesting a cancellation as of Wednesday would get their full federal student loans and interest. They would also get refunds for previous payments made on these loans.

An additional 68,000 complainants who did not attend eligible schools will receive a “simplified review” of their claims. Older applications will be reviewed first, while newer ones will get a decision within 2.5 years.

Any borrowers who were caught in DeVos’ wave of rejections will have their rejections revoked and their applications treated as if they were pending from the date they were originally submitted.

The Project on Predatory Student Lending, which represented the students in the lawsuit, said the agreement will help create a “fair, just and efficient business for future borrowers”.

“This landmark settlement proposal will provide answers and certainty to borrowers who have fought long and hard for a fair resolution of their defense claims after being misled by their schools and ignored or even dismissed by their government,” said Eileen. Connor, project manager.

Borrower defense requests are usually considered individually, but the Department of Education decided to grant an automatic cancellation in this case due to “common evidence of institutional fault” in the schools in question, according to the regulations.

At some schools there was already evidence of “gross misconduct”, while others were included due to high rates of claims from their former students, according to the agreement.

The borrower defense process was launched by Congress in 1994, but was rarely used until the collapse of the Corinthian Colleges chain in 2015. The for-profit company closed its campuses amid widespread fraud discoveries , prompting thousands of students to apply for debt cancellation.

See also  Who is the former TV news chief helping the January 6 committee?

This led the Obama administration to expand the program and create clearer rules. He became the centerpiece of the administration’s effort to crack down on for-profit colleges that lied or used high-pressure tactics to recruit students. Students at Corinthian and other chains said they enrolled on the promise of high-paying jobs, only to graduate with few job prospects.

Earlier this month, the Biden administration agreed to forgive federal student debt for anyone who attended a Corinthian school from the company’s founding in 1995 until its collapse two decades later. The action will clear $5.8 billion in debt for more than 560,000 borrowers, the largest single discharge in the Department of Education’s history.

The settlement adds to the administration’s efforts to cancel student debt for certain groups of borrowers. It erased billions more in debt from other for-profit former students, as well as severely disabled borrowers and those in government jobs.

Biden has also faced growing pressure to pursue massive student debt cancellation. The White House recently signaled that it was considering rescinding $10,000, but no decision has been made.

The The Switzerland Times education team receives support from the Carnegie Corporation of New York. The TSWT is solely responsible for all content.

Puts the police in special measures after a series of scandals

As Republicans push back on vaccine aid, congressional Democrats point to next steps.

NBC Reporter: ‘People who give birth’ don’t get abortions will hurt the economy