THE leader of the NXIVM sex cult says he was knocked unconscious after being punched in the head by a fellow inmate.

Keith Raniere claims he was placed in solitary confinement after the attack and was “dizzy for days and couldn’t get out of bed,” in legal documents obtained by The US Sun.

The 62-year-old, according to his lawyers, has also been placed in a cell with an intersex woman – despite his conviction for sex offenses – and in a cage next to a cell smeared with human feces.

Raniere was sentenced to 120 years in prison in 2020 after being found guilty of sex trafficking, racketeering, possession of child pornography and other crimes.

Prosecutors said Raniere had formed a secret society within NXIVM called DOS where female “slaves” were branded on their pubic area and told to hand over nude photos and other compromising material that could be used for blackmail if they tried to leave.

Raniere, who is currently seeking an appeal against his conviction, has filed an affidavit citing his alleged abuses behind bars at USP Tucson, Arizona, as part of an ongoing lawsuit against the prison.

His supporters say it’s not known what sparked the attack, but point out that it happened the day after TNT rerun an episode of “Rich and Shameless” called “The Heiress and the Sex Cult,” featuring former members of NXIVM accusing Raniere and Clare Bronfman of wrongdoing.

Raniere’s lawyers allege that his current treatment is part of an ongoing effort by the Bureau of Prisons and authorities to suppress his ability to fight his case in court. 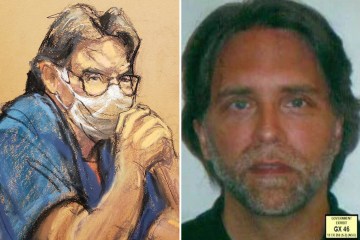 Lawyers for the NXIVM boss filed the first complaint against the BOP in May, alleging that the prison scrubbed Raniere’s contact list and blocked his communication with his proxy.

They claim the prison made these changes the day after Raniere filed a motion to stay his appeal over allegations that the FBI had tampered with the photos used as evidence at his trial.

At the time, the government called Raniere’s claims “frivolous”.

Raniere is still being held in the SHU, where his supporters say he must spend 23 hours a day in a small cell, often with another inmate, and have one hour of free time to roam around a small cage.

Prison guards recently put an intersex woman in his solitary cell and a few days later placed them both in a cage next to a cell with human feces all over the floor and smeared on the walls, Raniere’s lawyers say.

They were reportedly forced to stay there for hours and even have their lunch there, she added.

Stacy Scheff, Raniere’s attorney, said, “Mr. Raniere is the subject of constant retaliation by the Bureau of Prisons.

“Mr. Raniere was retaliated by having his contacts and call log deleted the day after he filed a motion exposing the FBI’s crimes.

“Mr. Raniere filed a complaint about that retaliation and was attacked by another inmate shortly after.

“After the attack, Mr Raniere was placed in the SHU to investigate the attack.

“That investigation has cleared Mr Raniere of any blame. According to BOP policy after the investigation was completed, which was now weeks ago, Keith should have been returned to his normal housing, but the retaliation continues while he is in SHU stays.

“Currently he is allowed one five-minute phone call a month, he cannot have a razor, he has no access to legal resources and is given books ‘at the discretion of the staff’.

“This is particularly outrageous as Mr Raniere is still actively pursuing his case in the courts.

“Recently, Mr. Raniere was held in a cage for four hours next to day-old human excrement, which lay on the floor and spread all over the wall. He was even forced to have lunch here. No explanation was given as to why he was in this unacceptable and inhumane conditions.”

During Raniere’s trial in New York, more than a dozen victims gave heartbreaking testimonies about how Raniere manipulated and sexually abused them.

“I still have dreams of you being punished by you for something insignificant and I can’t speak for fear of public embarrassment,” former NXIVM member turned whistleblower Sarah Edmondson said in a victim statement.

However, he still has a loyal following and supporters who have campaigned for his release, including actress Nicki Clyne.

Nicki filmed herself asking for help on behalf of Raniere and spoke about his prison conditions in a video shared with The US Sun.

The former Battlestar Galactica actress said: “Keith is concerned for his safety as he is constantly cycled by cellmates, and it only takes one bad cellmate in solitude to end his life.”

Another former NXIVM member, Eduardo Asunsolo, added: “Keith has lost weight since he was in solitary confinement, where he was placed for the sole reason that he was the victim of an attack. This is a human rights issue.”

The Sun reached out to USP Tucson and the BOP for comment.