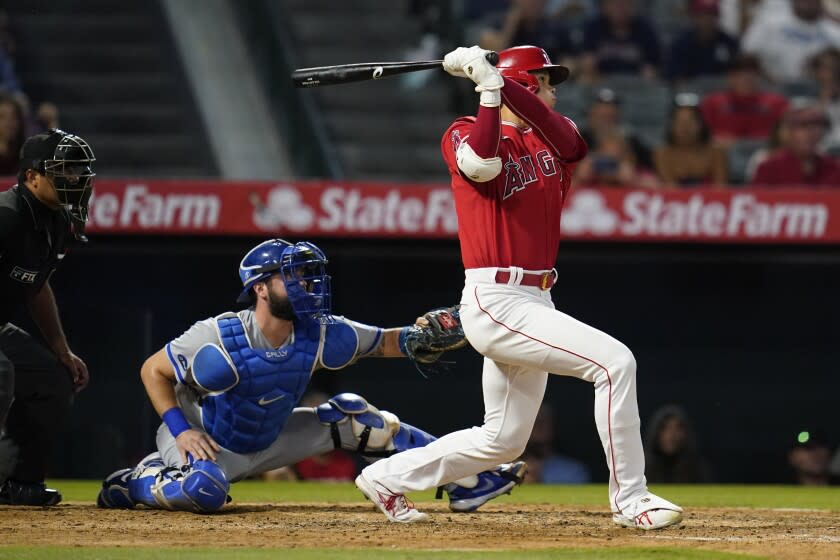 This was the offense the angels were looking for. But that was not enough to overcome the difficulties of a gassed enclosure.

Starter Reid Detmers didn’t have his best outing Tuesday night against the Kansas City Royals at Angel Stadium. Neither did some of the angel lifters. Although slugger Shohei Ohtani tied the game in the ninth inning with his second three-run homer of the game and finished with a career-best eight RBIs, the Angels lost 12-11 in 11 innings.

Ohtani was in a three-for-19 slump with no extra hits or RBI coming into Tuesday’s game. In the ninth inning, he faced Royals reliever Scott Barlow’s 78.6 mph curve ball and sent it over the right field fence.

The Explosion tied the game with one out in the ninth.

But in the 11th inning, reliever Jose Quijada gave up an RBI double to Whit Merrifield and an RBI single to Kyle Isbel, which put the Royals ahead quite comfortably.

Five innings earlier, with the Angels trailing 6-1, Ohtani headed home plate to the usual home cheers, with Taylor Ward and Mike Trout at base after walking.

Ohtani worked a full count against Royals starter Jonathan Heasley. Then came pitch six, a 92.3 mph four-seam fastball down the middle. Ohtani hit him deep over the center field wall.

The Angels shot within a run this inning after Jared Walsh – who hit a solo home run in the fourth – followed with a double, eventually getting dragged down by Max Stassi’s single.

The momentum continued in the seventh after the Royals added another run, this time off reliever Andrew Wantz. The Angels tied the score at 7 after Ohtani’s sacrifice fly and Walsh’s triple.

Angels relievers Aaron Loup and Jimmy Herget gave up three combined runs in the eighth and ninth innings before Ohtani’s explosion in the ninth tied the game.

Ohtani’s eight RBIs on Tuesday were two shy of the franchise-record 10 set by Garret Anderson against the New York Yankees on Aug. 21, 2007.