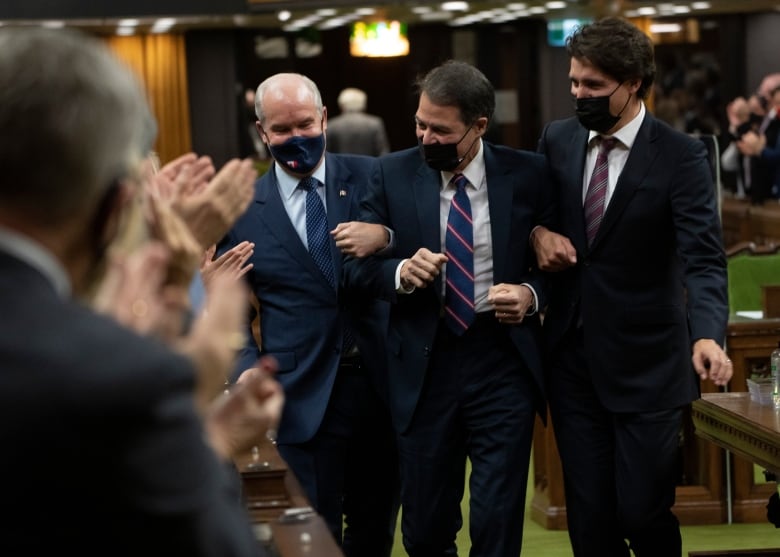 This is an excerpt from Minority report, a weekly newsletter on federal politics. If you are not yet a subscriber, you can do so by clicking here.

Anthony Rota, Liberal MP for Nipissing—Timiskaming, is the 37th Speaker of the House of Commons and the first Speaker to chair hybrid House meetings — an innovation prompted by the COVID-19 pandemic.

As the spring parliamentary sitting ends this week — the House is now adjourned until September — Rota spoke to TSWT News this week about his recent return from heart surgery, the eternal struggle to keep order during Question Period, new security concerns and the potential future of hybrid sessions.

The following transcript has been edited for length and clarity:

Q: Let’s start with you. You obviously had heart surgery few months ago. How is the recovery going? How does it feel to be back at work?

A: I’ve been back for a little over a month now and it’s been going great. I think the recovery was ahead of schedule, which is good, but it took a little more than I expected. I thought I’d be back after three weeks, to be honest with you – guessing my doctors, of course. But it took time to recover and I am still recovering. I’ve talked to other people who have had bypass surgery or open heart surgery, and it takes at least three months to get back on your feet and then a year to get back to normal. So overall, I feel pretty good. What I find is near the end of the day, the energy level is not what it used to be, but it is coming back. I notice a difference every day.

Q: Obviously, decorum is a constant concern, but how do you find the tenor of the Chamber at this stage?

A: Compared to other years, they are doing well. And there is a concerted effort by whips and House leaders to maintain some decorum in the House and that is much appreciated. I know it feels out of control at times, but it’s just the strong emotions at the end of each session and this one is no different. But I find, believe it or not, that the decorum is actually better, and I have to commend the whips and the House leaders for that.

Q: I don’t know how often you watch the British Parliament, but their speakers are often a bit more, say, authoritative and direct to get angry and put people in their place. And I’ve always found – and I think it continues with you – that Canadian speakers take a lighter approach to things, a lighter hand. Do you think this works?

A: Well, I remember my father telling me that you get a lot more bees with honey than with vinegar. And that’s something that I think is important when trying to keep calm. I’ve raised my voice a few times, and sometimes it’s more like an experience than anything just to see. When they’re used to you being calm all the time, when you raise your voice, or when you get a little stricter, they take you seriously. What I always look at is, okay, how can this be a teachable moment? And I rarely choose a deputy and make an example of them. What I’ll normally do is say, okay, that’s what the rules say, and I just want to make sure everyone knows. And the person acting out or the one causing the problem knows who I’m talking to…and they calm down right away. Whereas if I slapped their fingers and humiliated them publicly, I’m not sure it would do anything but embarrass them in front of everyone, which isn’t the goal. It’s all about getting peace in the bedroom and it usually works quite well.

Q: You had intervention in February where you said, “I’ve had e-mails from people watching us at home and they’re kind of ashamed of their Parliament because of the continuing screaming. Do you hear a lot of Canadians watching question period or watching a clip on television and being unhappy about it?

A: There are a few every week who will email me and say: ; how do you stop them from yelling at each other? Or; thank you for being stricter with certain people. And I guess everyone has a different style. I’ve seen Presidents who are very tough on people and who try to work with people, and I think working with people gets us going. But overall, I’m surprised at how many people are watching and taking the time to write, which is much appreciated as it’s always nice to get feedback and be able to act on it.

Q: Presiding over Parliament at the moment, does it take a different turn given the concerns about democracy and political conflict that we see in other countries?

A: Well, democracy is about civilized discussion and debate and that’s what we want to do – we want it to stay civilized. As soon as people start yelling at each other, well, we lose that, that civil discourse that is so important to our democracy. It is therefore important to maintain it at a certain level. Now, during the debate, you will notice that everything is quite calm. It’s usually during question period, when everyone comes together, that you will see the emotions running high. And sometimes it’s more powerful than the individual and they’ll shout a comment. That’s heckling. What I really don’t like is when they try to muffle the person talking, because all of a sudden it’s not heckling anymore, it’s bullying. And that’s something that, whether it’s the government or the opposition, shouldn’t be allowed.

Q: There have obviously been security concerns around Parliament Hill and security issues for some MPs. In addition to your duties in the House, what is the security concern at this point?

A: Safety is always a concern. We started looking at this when I was first elected and shortly after COVID was declared. We started looking at different parliaments around the world and what they were doing to protect their members. And we’ve actually had meetings with other parliaments, including the UK. President Lindsay Hoyle has become a very good friend. We consult fairly regularly. We brought in our security people, including the sergeant-at-arms, and they brought in their men and we compared notes and we learned a lot from them because they lost two deputies to violence [attacks] and that’s something they reacted to. Since then, what we have done is we have included increased security measures for Members of Parliament, whether it is security assessments for their homes and offices, security equipment, advice and just awareness of some of the things that could happen. We included training… not only how to protect yourself in Ottawa, but also in the riding, and how to engage local police forces. So there are a lot of different variables. The sad thing is that many of them are very unpredictable and we never know where they will come from.

Q: I know the hybrid parliament has become a political debate, so I’m not going to ask you to comment on that.

A: I appreciate it. Thanks.

A: I feel like that’s where it can work. But we have incidents like [this week] where the internet has gone down and there really isn’t much to do about it, which will affect the functioning of Parliament. Now, the decision to continue will rest with the House leaders and with Parliament. Overall, it has served us well so far, and COVID has forced us to adapt to new technologies. Do we sustain them is the question we all need to ask ourselves, and it will be interesting to see where that takes us.

Q: Has presiding over a hybrid parliament over the past two years changed the job of the Speaker?

A: It’s like everything we do under COVID, it’s affected the way we do things. But the basic premise remains the same — it’s about maintaining decorum in the bedroom, and that bedroom is now spreading across the country on the internet. It makes things a bit harder and was definitely a learning experience, but I think what happened with COVID [is] we have learned to use new tools that we will probably be able to use a little more often in the future. The only thing that worries me is that we don’t want this to become the status quo. And I’m afraid someone on the hybrid system will just say; you know what, I don’t feel like going to Ottawa this week, I’m just going to do this from home – anywhere in Canada. It’s nice to have this option, but the rules about when you can use this option should be very clear and concise.

Q: Are you at all concerned about the impact on MP relations? I remember reading once that there was a proposal in the 80s or 90s to introduce electronic voting and one of the arguments against it became, well, look, one of the only times the MPs are all in the same room together, that’s when MPs vote and so if you opt for electronic voting you lose that opportunity for MPs to get to know each other, to talk, to communicate and to share information . Is this your concern? Are you worried that MPs will become more distant from each other and you will lose that human connection?

A: That’s one of my biggest concerns, actually. Not being in the same room, we miss that human connection and a lot of discussions, a lot of agreements, a lot of compromises that are made are usually done in the halls, in the corridors, in the offices together. It’s not something you get on the internet. Even with video conferencing, it’s not the same as being there in person. You don’t get the same feeling cause sometimes just the expressions, the body [language] or the facial expressions that come out from person to person – you can gauge where you are and whether you need to step back or if it’s good to move forward. So, yeah, I’m very concerned that we’re losing that human touch because, really, when you know each other personally, it’s a lot easier to talk to each other – when you don’t just see a guy on a screen or someone on the other side of the floor that you never actually sat with. One of the things I’ve done since I’ve been Speaker is that I’ve tried to have as many dinner parties as possible with MPs. We have one a week and we try to have MPs from different parties sitting next to each other. You are therefore not allowed to sit next to someone in the same group. And we pick random people and bring them. And what ultimately happens is that by the end of dinner, people get to know each other better and they’re no longer strangers or that person I want to crush on the other side; It’s my friend John or Mary on the other side. I’ll go talk to him and see what we can do.