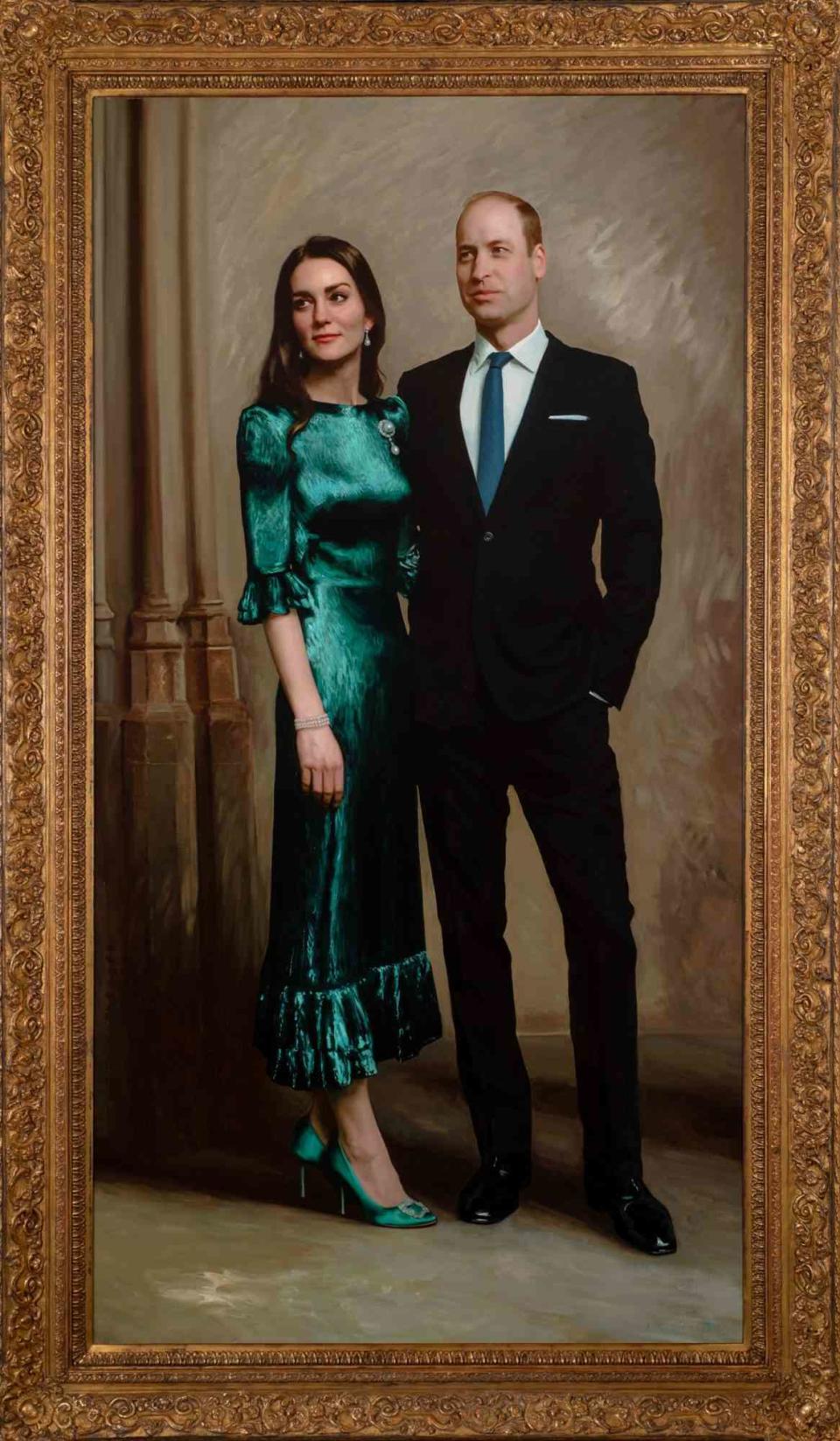 William and Kate, both 40, stopped at the University of Cambridge’s Fitzwilliam Museum in the heart of Cambridge, where they saw the painted work as it was first revealed to the public . The piece was commissioned in 2021 by the Cambridgeshire Royal Portrait Fund, held by the Cambridge Community Foundation, as a gift to Cambridgeshire. It was painted by award-winning British portrait painter Jamie Coreth.

“It was the most extraordinary privilege of my life to be chosen to paint this picture,” Coreth said. “I wanted to show Their Royal Highnesses in a way where they seemed both relaxed and approachable, as well as elegant and dignified.”

“As this is the first portrait to depict them together, and specifically during their time as Duke and Duchess of Cambridge, I wanted the image to evoke a sense of balance between their public and private lives. piece was commissioned as a gift for the people of Cambridgeshire, and I hope they enjoy it as much as I enjoyed creating it,” he continued.

In the portrait, Kate is wearing her metallic emerald dress from The Vampire’s Wife, which she wore when the couple visited Dublin in March 2020. William is seen in a dark suit and blue tie.

After viewing the play, Kate and Prince William will meet supporters of the project, including the artist. They will also meet Lady Sibyl Marshall, wife of the late Sir Michael Marshall, who originally came up with the idea to create the portrait.

Later today, Kate and Prince William will take part in the first ever Cambridgeshire County Day at the Racecourse in July. Made up of 120 exhibitors from the Cambridgeshire private, charity, community and public sectors, the couple will visit a number of stalls and meet members of the public. County Day will also celebrate the year of Her Majesty The Queen’s Platinum Jubilee.

SplashNews.com Kate Middleton and Prince William visit the Fitzwilliam Museum at the University of Cambridge

During the day there will be performances and demonstrations by choirs, bands and dancers as well as showcases from organizations such as blue light services, local charities and volunteer groups. Prince William and Kate will also see leading small and large companies offering innovations in areas such as medicine and science.

During Queen Elizabeth’s Platinum Jubilee weekend, Prince William and Kate visited Wales with their two eldest children: Prince George, 8, and Princess Charlotte, 7. When Prince Charles becomes monarch, Prince William will become Prince of Wales, the title given to the heir to the throne, while Kate will be known as Princess of Wales.

SplashNews.com Kate Middleton and Prince William visit the Fitzwilliam Museum at the University of Cambridge

The day was particularly poignant for George, whose visit mirrored his father’s first official trip to Wales when he was the same age. In March 1991, William joined his mother, Princess Diana, and father, Prince Charles, in Cardiff. Excited crowds presented the young prince with daffodils – Welsh’s national flower – as he strolled outside Llandaff Cathedral.

I can’t get enough PEOPLEThe cover of the Royals? Sign up for our free Royals newsletter to get the latest updates on Kate MiddletonMeghan Markle and more!

Their appearance in Wales underlined one of the main purposes of the Jubilee weekend – not only celebrating the Queen’s 70-year reign, but also highlighting the future and succession of the monarchy, as Prince William and Prince George are the future Princes of Wales. before becoming kings.

Tejasswi Prakash grooves with his mother and the mother of his beau Karan Kundrra in a viral reel, the actor reacts