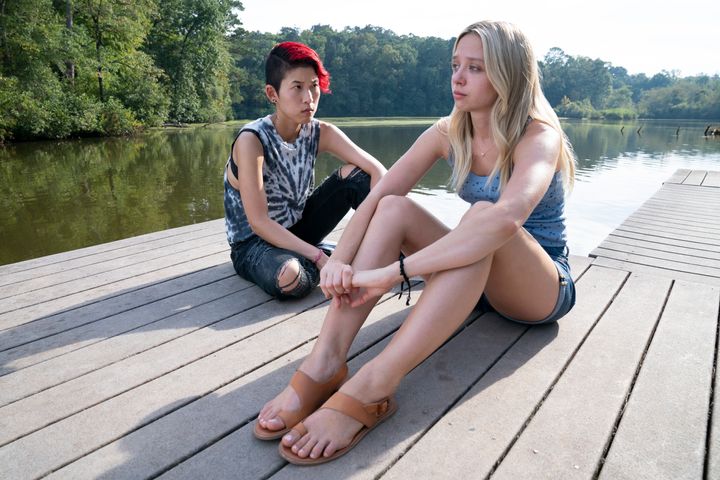 Recent mainstream horror has an operating problem. Unfortunately, that can often be traced back to the beautiful film ‘Get Out’ from 2017, which with all its subtlety, subtlety and topical nuance should have raised the bar. But it somehow opened the floodgates for a slew of identity horror knock-offs — from “Them” to “Antebellum” — that are superficial, sloppy copycats.

“She/She” is the last to suffer this fate.

And it’s a shame. Because it features a large cast of queer actors who also portray queer characters when the genre has had a long history of avoiding them altogether. While there are plenty of interesting stories – even some that have little to do with their gender and/or sexual identity – that could benefit from more inclusion.

Writer-director John Logan’s “They/Them” is all about the strangeness of its characters, but with a thin suspense, horror and plot. It comes across as if the filmmaker had no idea what kind of story he wanted to create around his capable cast.

So Logan goes for the lowest-hanging fruit — putting “them/them” in a gay conversion camp called Camp Whistler. While that’s ripe for all sorts of atrocities and horrors that could make for an entertainingly entertaining gore-fest, it immediately poses a few issues that can never be satisfactorily reconciled.

For starters, how do you make a horror movie that focuses on queer people and that a group that already brutal in real life? The second question is a bit more complicated and rooted in a consistent issue that recent horror filmmakers have frustratingly shunned to contend with.

Where else can the horror come from or what is a subtextual horror that can be explored simultaneously in the story so that it is not strictly tied to a character’s identity? Mariama DiallosMaster”, from earlier this year, had woven witches and ghouls skillfully into his story of a black female student navigating a privileged, white academic space.

“American Horror Story: Asylum,” told a haunting story of how society responds to queerness and races through the prism of an unethical mental institution. The eerie images and music were also deeply disturbing.

“She/She”, on the other hand, resorts to literal storytelling, which goes against what makes so many horror movies great. That’s even despite there being a title in which to pronounce the slash, suggesting a hint of allegory. Do you understand? Because it has to be a slasher?

But that is not it. Not really, anyway. A group of young gay adults find themselves in this conversion camp led by Owen Whistler (Kevin Bacon), an obvious villain who preaches about his resolve to help them while conjuring a frosty smile. Molly (Anna Chlumsky), one of Owen’s right-hand man, is also there to mysteriously support his decision.

And day after day, the queer, sadly one-dimensional characters (played by actors like Theo Germaine, Quei Tann and Anna Lore) are subjected to the same oppressive rules. That includes being forced to wear clothing appropriate to their assigned gender, shoot animals, and generally act in direct opposition to who they are.

The typically distressing experiences queer people experience in a heteronormative society are compounded by being in a virtual prison. “She/She” doesn’t even bother to build compelling stories around them. Molly, as wafer-thin as her storyline is, is actually a more interesting character. That says a lot about the priorities of the film.

Logan’s film assumes that audiences will be disturbed by the reality next to the plot, but not by the plot itself. Absent are the things you anticipate and even crave a horror such as tension and increasing anxiety. The most intense reaction it can evoke is boredom.

Because apart from a few awkwardly violent twists towards the end of the film, one that further exploits queerness and another that is an undeveloped revenge subplot, nothing happens in the film. The movie spends a lot of time building things that never actually happen, which makes it an even more annoying watch.

The movie isn’t even smart enough to add some humor or commentary, like in ‘Scream’ or ‘But I’m a Cheerleader’, just to make you feel… something. Something.

“they/them” is not alone not scary, but it also has nothing to say. A total waste.